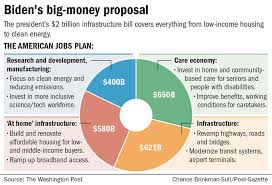 The big question worldwide is whether President Joe Biden’s stimulus plan can once more return the U.S. to the role of a global economic driver and speed up recovery.

On March 31, Biden proposed a second stimulus package, broadly focused on infrastructure. This plan reflects Biden’s vision and path for comprehensively revitalizing the economy. At the same time, he also announced an increase in the corporate tax rate from 21% to 28%, which would inject funding into his revitalization plan. To those observing from the outside, this plan can be described as printing currency twice as fast so the market can be rescued by throwing money at it.

Before it’s determined whether the new plan can even be implemented, a few issues must be clarified. First, this plan, unprecedented in size, would be implemented in steps that would take a minimum of eight years to complete. Everyone is skeptical about the project’s chances of completion during Biden’s term of office.

In actuality, what Biden announced is only the first part, costing $2.6 trillion — less than the projected $3 or $4 trillion. However, Reuters reported that Biden will announce the second part of the plan toward the end of April, which will add at least another $2 trillion. While Congress may not have problems passing the first part, whether it will completely accept the second part remains unknown.

Second, the grand objective of the new plan is to utilize big government to rebuild a better future for a new American dream. While the plan will focus on pandemic recovery in the short run, hopefully it will fix much criticized long-term problems, such as lagging infrastructure and racial injustice and inequality, as well as addressing issues such as climate change. Moreover, Biden also plans to implement a “one-time capital investment” to increase America’s global competitiveness.

Overall, the policy objectives of the plan’s first part are so complex that it will be difficult to see results quickly.

Third, multinational think tanks believe that the infrastructure spending during the first part of the plan will further raise the federal budget deficit and exacerbate America’s fiscal cliff. In turn, the U.S. may go the way of countries with severe debt crises, such as Portugal, Ireland, Greece and Spain. In addition, Biden’s plan to raise corporate taxes will further worsen domestic investment and the business environment, resulting in an absence of international investment and the overseas relocation of domestic manufacturers. This will negatively affect the actual growth of economic sectors.

A huge plan such as this will surely spark a new round of political struggles, domestic divides and upheaval, in which case the U.S. will have a difficult time returning to its place as a global leader.