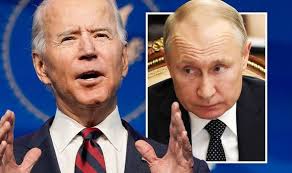 One plays to the strong. No one plays to the weak, and the weak aren’t even asked. Although a proposed and likely meeting between President Joe Biden and his Russian counterpart, Vladimir Putin, would be in a third country, the advantage goes to the one being invited. In a game of nerves, Biden has blinked first.

This is happening with several very important developments taking place in the background.

First, in no particular order, the U.S. failed to break Iran. As early as the end of last year, it was obvious, as explained, that Tehran is very close to achieving the goal of uranium enrichment and it is a matter of politics, not technological readiness. And with Washington’s policies, that isn’t going to stop. The U.S. is moving too fast. Pressure gives rise to adaptation. Adaptation gives rise to negotiating power. Iran is not an inconsequential country, but it also has a very pragmatic rapprochement with countries based on a new security structure. Iran is also important in monitoring Turkey’s behavior. The behavior of countries that have a centuries-old history that they have not forgotten must be monitored. Preserving and updating history creates certain reflex actions.

Second, in a few years it is very likely new countries will officially join the nuclear weapons club. But this is not the most important issue; it is only natural, and one of the signs of a new global security model. Nuclear weapons will be one of the factors that legitimize countries that are actively involved in shaping the new security architecture. No less important is the fact that this new model comes with new technology, and that is where Washington lags behind. Washington is all about hypersonic weapons. On April 6, the test of the American hypersonic missile failed. In the phase being tested, this means pushing the time forward by about two years. In Russia, hypersonic missiles are a fact, and by the end of the year, they will be deployed not only for use by submarines, but also other types of launchers. When a new technology is being introduced, it is natural to assume that the one who created it has also developed and successfully tested the ways in which it can be counteracted.

Third, there is Ukraine. As early as the end of 2020, it was clear that activity and tension were brewing on the border between Russia and Ukraine, and with the arrival of a new administration, it was confirmed. Of course, the tension in Donbass is related to the completion of Nord Stream 2. The probable failure of American diplomacy cannot be offset in any other way but with action. And it will probably mean another failure, but with a much higher price paid by the European people. It is wrong to suggest that Moscow would provoke a fratricidal conflict on its own, when one remembers history is not subject to revision by coinciding with temporary situations. But in the end, this is the big objective; to open old and unhealed wounds that damaged both the East and the West. It is good to recall Otto von Bismarck’s take on the subject: “slowly harnessed, but quickly arriving.” If Moscow wanted something, we would now be commenting on the results, not the possibilities. Speculation is harmful, especially when the largest NATO military exercise, postponed since March 2020, is taking place in Europe, including in Bulgaria.

It is important to keep the dialogue open and to realize that playing can turn into tears, but this time one is likely to hear a heavy roar. Europe’s pants are down, to paraphrase Winston Churchill, and 500 new U.S. troops in Germany can mean only one thing — freedom and sovereignty are merely occasional and partial conventions. There is pressure yet to come, including for us, albeit much less seriously, through the political constructs that will take shape in the coming months.