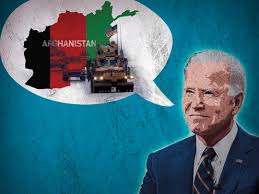 On Wednesday, April 14, Joe Biden announced that American armed forces will have completely left Afghanistan by Sept. 11, 20 years after the attacks on the World Trade Center. This is a choice that is likely to benefit the Taliban.

On Wednesday, April 14, as he announced the total withdrawal of American troops from Afghanistan by the symbolic date of Sept. 11, 20 years to the day after the attacks by al-Qaida that justified intervention in the country, President Joe Biden declared neither victory nor defeat. Nevertheless, his decision signals the failure, once and for all, of a foreign policy pursuing political regime change through military power.

Claiming victory would be difficult. After 20 years of foreign military presence in Afghanistan and thousands of dead, including more than 2,400 Americans, peace has not returned; the Taliban, who have increased their militant activities over the past few months, control more than half of the country. The Kabul government is fragile and nobody can guarantee its survival after the departure of Western troops.

Yet, a total defeat it is not. The support provided to the Afghan government allowed girls to return to school and women’s participation in public life to grow. The objective for intervening in Afghanistan in October 2001 that American troops had set for themselves — to prevent this country from harboring al-Qaida, the terrorist organization that organized the Sept. 11 attacks on the World Trade Center in New York and on the Pentagon — has largely been achieved. Osama bin Laden, mastermind of these attacks, was killed in an American raid in Pakistan 10 years ago.

But since then, the reasons for the continued American presence in Afghanistan “have become increasingly unclear,” as Biden pointed out on Wednesday. American troops, which account for fewer than 2,500 soldiers, down from 90,000 in 2010, were officially no longer there on a combat mission, but on a support mission, alongside NATO forces, and to train the Afghan army. Twenty years, that’s a generation: For the Democratic president, who noted that some American soldiers deployed today in Afghanistan have taken their parents’ place, this war is not meant to be “multigenerational.” The time has come to draw a line and leave.

The risk of leaving with no strings attached is obvious. Regardless of the ongoing peace negotiations with the Taliban, they can take advantage of the withdrawal of foreign troops, one of the last pillars of stability, to regain the upper hand and, in particular, reverse the progress made on the status of Afghan women. But today, the focus of the White House is on other priorities. The era of endless wars that are impossible to win is over; the prevailing imperative is to bolster the social and economic strength of the United States, which is essential to face the Chinese challenge and new threats in the world.

Biden indicated that the American pullout would take place along with the withdrawal of other NATO troops, whose current contingent of some 6,000 troops is, he noted, greater than that of the United States. Yet, for a president who is keen on restoring a bond of trust between Washington and its allies, that part of his speech was regrettably brief. A word of thanks before the American public to those allies who also paid a heavy price in human lives to support American forces would have been welcome. And a modicum of consultation with European leaders before deciding on the withdrawal would have been wise. Donald Trump is gone, but “America First” is alive and well.

About Mireille Dedios 43 Articles
I’m an independent French translator based in the Boston area, certified by the American Translators Association (French into English). I honed my translating skills as part of the executive teams of various French and US companies, including State Street Corporation, where as a member of the Public Relations team, I tracked the news media globally and translated press releases into French. I enjoyed this work tremendously and continue to look for opportunities combining translation and news coverage, culture, history and international relations.