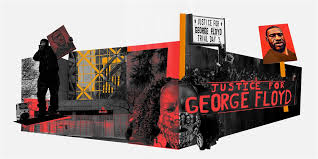 The announcement of the jury’s verdict, broadcast by all major stations, was greeted with applause and cheers of joy from the crowd gathered outside the court. Commentators agree the sentence is fair.

Former Minneapolis police officer Derek Chauvin listened to the verdict in last May’s killing of George Floyd, a Black man. After 10 hours of deliberation, the jury found defendant Chauvin guilty of all three charges: second-degree murder (without premeditation), third-degree murder (causing death by a particularly dangerous act demonstrating moral depravity) and manslaughter. These crimes carry a maximum prison sentence of 40 years, 25 years and 10 years, respectively, in Minnesota. The judge who presided over the trial will determine the sentence later on.

The judge’s announcement of the jury’s verdict, broadcast by all major television stations, was greeted by applause and cheers from the crowd gathered outside the courthouse. Commentators agree that the sentence is fair. Chauvin’s attorney has announced he will appeal, but the Minneapolis verdict is expected to be upheld. The footage of the whole tragic incident clearly testifies to that.

Last May 25, Chauvin and two police officers arrested the 46-year-old Floyd on suspicion of passing a counterfeit $20 bill. The officers handcuffed him and knocked him to the ground. As Floyd lay on his stomach, Chauvin pinned Floyd down by kneeling on Floyd’s neck. Despite Floyd’s pleas that he couldn’t breathe, despite calls from bystanders to stop tormenting the overwhelmed and unresisting man, Chauvin held him down using his full weight for more than nine minutes. Floyd died after only six minutes. At trial, experts ruled that the cause of death was asphyxiation.

Congresswoman Adds Fuel to the Fire

In advance of the verdict, Minneapolis authorities and many other American cities mobilized law enforcement and the military. Owners of stores and services boarded up displays and glass doors. People predicted that if Chauvin were acquitted or found guilty of only the lightest charge, the streets would become the scene of mass protests that could, as in the past, turn into turbulent rioting, along with shoplifting, destruction of buildings and attacks on police stations. Even during the trial, crowds flocked to the streets of Minneapolis in response to the call of the Black Lives Matter movement, which opposes police brutality and racism.

On Monday, California Democratic Rep. Maxine Waters said Black Lives Matter should be more confrontational in the event of a lenient verdict for the defendant. Republicans in Congress and the right-wing media saw this as adding fuel to the fire amid heated sentiment following Floyd’s murder and a series of other police killings. Republican House Minority Leader Kevin McCarthy introduced a motion to reprimand Waters for exerting pressure on the court and calling for violence. After a wave of criticism, including criticism from the liberal media, the congresswoman said she did not support any violent demonstrations.

The End of Tolerance for Police Brutality

The jury verdict in Minneapolis is considered a landmark verdict n the United States. The killings of arrested African Americans as a result of the use of excessive force or unjustified use of firearms rarely found an epilogue in court, and even more rarely resulted in the conviction of police officers. Chauvin’s attorney argued that his client had followed his department’s training and guidance regarding the use of force. The police officer’s superiors denied this. Chauvin’s attorney also tried to argue that factors other than asphyxia had a decisive factor in Floyd’s death; that the Black man took drugs and suffered from heart problems. This is a typical tactic of those who defend police officers, shifting the blame onto the victim.

In the past, such arguments frequently convinced the jury. Usually, however, there were not even any criminal charges, as the justice system sided with the police. Police officer unions successfully lobbied for allowing a considerable margin of discretion in deciding when the use of force was justified. The wave of protest that swept across America after Floyd’s killing drew particular attention to the racial aspect of the problem: the fact that the overwhelming majority of victims of police brutality are Black men and the killers are almost always white officers. Most of the demonstrators were young white Americans, which shows that the tolerance for police impunity is ending.

Will the Floyd Trial Make a Difference?

Democrats in Congress have already proposed a bill to hold the police accountable for abuse of force, and it has the president’s support. It is not known whether the bill will be passed, because in the Senate, all laws require a majority of at least 60 (out of 100) votes to advance,* and the Democrats only have one tie-breaking vote, that of Vice President Kamala Harris.

Joe Biden announced he would appear on TV from the White House after the Minneapolis verdict. The movement for police reform is urging him to take a firm stance on the matter.

*Editor’s Note: The 60-vote majority to pass bills in the Senate is to end a filibuster, not a formal requirement.