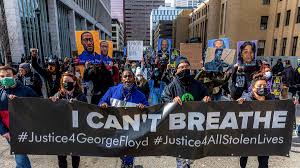 The trial for the murder of George Floyd in the U.S. city of Minneapolis is currently taking place and public opinion, particularly that of people of color across the world, is focused on this courtroom. Despite this, the U.S. legal system has not hesitated to express its support for the racist, murdering officer that killed Floyd.

In the US Murderers Can Remain Silent!**

Derek Chauvin, the former police officer who is accused of murdering Floyd, refused to make a statement during his trial, which is now coming to a close. The U.S. constitution formally recognizes this right. In other words, in the U.S. a murderer, when faced with the court’s inquiries as to his motivation, can remain silent, and his silence will not even count against him in the trial!

In the courtroom, Chauvin has refused to comment on the case against him. The Fifth Amendment of the U.S. Constitution grants him this right. If a defendant believes that making a statement would damage his case, he can refer to this amendment and choose to remain silent. Peter Cahill, the judge presiding over this case, specifically asked the members of the jury to not hold Chauvin’s silence against him when considering the case of Floyd’s death.

At the same time, this American officer and murderer flagrantly denies that he killed Floyd; instead, he believes that other factors contributed to the man’s death! This despite the fact that Chauvin stands formally accused of holding his knee to the African American man’s neck, killing him.

Undeniable evidence, including the widely shared video, clearly shows that Chauvin intentionally caused Floyd’s death. And yet Chauvin’s defense attorney maintains that his client did nothing wrong.

What Are the Facts?

The fact is that despite the protections that the U.S. legal system has created for racists like Chauvin, it is clear what most of the American people hope the outcome of this trial will be. The facts of this case are completely clear!

Chauvin held his knee on Floyd’s neck for nine and a half minutes and even though Floyd repeatedly said that he couldn’t breathe, Chauvin continued. After Floyd fell unconscious, he was taken to a hospital, where he then died. The prosecutor requested that Chauvin be charged with second-degree murder.

The sentence for such a crime could be up to 40 years. But Chauvin denies the charges against him. The trial of this former police officer will likely end early next week; after the defense’s closing statements, the jury will decide on the case. Let us not forget that the publication of the video of Floyd’s death led to widespread protests against racism and police violence in the U.S., protests which went on for weeks and were supported by activists in other countries.

Systematic Racism in the US

Not only Chauvin, but many other racist police officers have murdered thousands of people of color in U.S. streets over the past few years, with varying excuses. Without issue they have shot and killed these people, most of whom did not have a weapon and even had their hands raised to show their surrender!

When these cases are revealed, police officials simply claim that their actions were taken because the victim was dangerous, and that the cops had no choice but to kill them! Even high ranking federal law enforcement officials express their full support for the racist officers in these situations, and at best, the officers are suspended for a brief period.

While Chauvin’s trial is ongoing, in the meantime the U.S. has witnessed other unfortunate losses to racism. The most recent of these cases involves the murder of a 13-year-old boy by U.S. police. At first the police deceptively claimed that the teenager was armed, but it was later discovered that he actually had his hands above his head and had no weapon.

Following the outbreak of protests in Chicago against the police shooting and killing a 13-year-old boy, on Wednesday the Chicago Civilian Office of Police Accountability published the video of the shooting on their website.

In this video, the teenager, Adam Toledo, can be seen throwing his weapon on the ground and putting his hands up seconds before the officer shoots him. According to Euronews, the shooting took place at three a.m. on March 29. On that day Toledo, who was Hispanic, was with another 21-year-old boy when they had a confrontation with police and fled on foot. The 21-year-old was also eventually arrested by police.

Contrary to the police statement that Toledo had a gun in his hand when he was shot, in this video it can clearly be seen that he has nothing in his hand and that his hands are raised. Despite this, a police officer by the name of Eric Stillman shot him in the chest.

The Chicago Civilian Office of Police Accountability at first was reluctant to release the video, claiming that official policy prevents them from releasing footage of shootings involving minors. But after a request from the city government and the Institute for Police Accountability, the video was published.

Additionally, the Chicago Police Department announced the name, age, and race of the officer, revealing the identity of Stillman, a 36-year-old white man. Usually the department does not release the names of officers involved in shootings so quickly and waits until the investigation is complete. In this case, it’s clear that the department was forced to release this information out of fear of the public backlash.

*Editor’s Note: Chauvin was found guilty on all three charges on April 21.