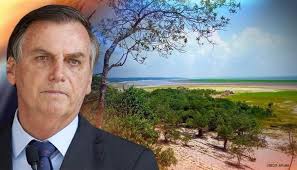 Governors and civil society fill the vacuum left by the Brazilian government at the Climate Summit.

The record destruction of the Amazon forests in the last two years and Jair Bolsonaro’s delay in recognizing the election of President Joe Biden left little space for any positive reception of the letter that the Brazilian leader sent on April 14 to the president of the United States, promising to do the opposite of what he has done up until now and to work to contain and reverse deforestation and carbon dioxide emissions. For this very reason, the missive must not diminish the pressure on Brazil before and after the virtual summit about climate change on April 22-23, which will bring together 40 leaders invited by the U.S. president. Washington’s disposition to be firm was reinforced after 22 state governors and hundreds of civil society leaders, among them businessmen and major bankers, communicated to the White House that they supported ambitious goals.

The governors’ initiative came after the American government’s public rejection, on March 29, of Brazil’s demand for the additional payment of $1 billion per year for environmental services presented by Ricardo Salles, minister of the environment. A U.S. State Department spokesman said, “We want to see very clear and tangible steps to increase effective enforcement, and a political signal that illegal deforestation and encroachment won’t be tolerated,” adding that the U.S. wants to see a “real diminution this year, and not wait five or 10 years.”*

In the same vein, just days after, 280 leaders of large companies and business associations of agribusiness, industry, finance and scientific and environmental entities joined the Brazilian Climate, Forests and Agriculture Coalition and endorsed Washington’s demand, which counts on the support of the European Union. In the absence of progress in secret conversations underway since last month, U.S. Ambassador to Brazil Todd Chapman presented what sounded like an ultimatum in a closed conversation with businessmen, politicians, economists and diplomats. On Friday, influential Democratic senators asked Biden not to make concessions to Bolsonaro.

In sum, the governors’ message to Biden and the Coalition’s document represented a tacit endorsement by political leaders and civil society of a strategic vision in formation about climate policy, and constitutes an important new fact in a country where businesses and bankers have traditionally avoided publicly diverging from the government. The new posture is fed by Bolsonaro’s sharp loss of credibility in the handling of the pandemic and the economy, along with the growing fear that Brazil is becoming the target of international sanctions, already visible in the prohibition of Brazilians from entering various countries.

The actions proposed by the Coalition are concrete and specific. The people who signed and sent the detailed letter to Bolsonaro advocate the return and intensification of inspections by competent federal agencies in order to curb the continuation of illicit activities in the Amazon. They also ask for the punishment of offenders as an example. The abandonment of inspection and the nonapplication of fines fixed by law explain in great measure the new records of forest destruction registered in 2019 and 2020. Contrary to the current policy of the Ministry of Environment, the signatories advocate for the finalization of the Rural Environmental Registry and the suspension of the registration and regularization of properties illegally deforested after 2008, as stipulated in the Forest Code. The Coalition even proposes another 10 million hectares (approximately 24.7 million acres) of forest be designated for protection and sustainable use in regions which are under strong deforestation pressure, and that their owners have access to financing granted under clear socioenvironmental criteria. The Coalition is also seeking “total transparency and efficiency in the authorization of the clearing of vegetation.”

For obvious reasons, there has not been any transparency in the secretive conversations between Brazilian and American officials. Environmentalists who monitor the talks believe that the demands presented by the Coalition are at the core of the negotiations.

It is known that Washington considers the participation of the Itamaraty a key factor for the proper conduct of consultations. This is itself relevant information, because the art of negotiation is the essence of diplomatic activity, something which has been neglected lately in Brasilia. It is also crucial for building confidence, which today is nonexistent, as explained by a U.S. spokesman who talked to Brazilian journalists at the end of March.

“If the world is going to make an investment in helping combat deforestation, confidence must be created,” he explained. “We are not saying how Brazil must act. But it seems to us that there are measures which must be taken. What we seek is clarity. The world will watch and understand, asking is Brazil moving forward? Or not?”* It is up to Bolsonaro to answer this question. But it is not vital that he do this, and it could be even better if he stays on the margins in the summit if his participation is just play-acting and he believes he can let environmental regulations slide in the Amazon, which Salles referred to as “running the cattle through.”

*Translator’s note: Although accurately translated, this last quoted remark could not be independently verified.