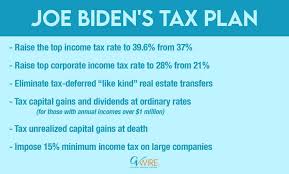 After decades of tax cuts, Joe Biden wants the rich in the United States to pay up. But his plan has holes — and internal opponents.

Those who watched the new U.S. president’s first big speech to Congress on Wednesday evening might have gotten the impression in some parts that left-leaning Sen. Bernie Sanders was standing at the microphone, not Joe Biden, a moderate within the party for decades. “It’s time for corporate America and the wealthiest 1% of Americans to just begin to pay their fair share,” the commander-in-chief declared. Sentences like these were usually heard amid loud cheers at Sanders rallies during the primary election, while Biden was assuring wealthy donors at exclusive private parties that “nothing would fundamentally change” for them under his presidency.

However, if Biden gets his tax plans through Congress, some things would fundamentally change for the rich in the country. After multiple media outlets had already reported on the government’s tax plans in the past week, the president made his ideas public on Wednesday to an audience of millions. “We’re going to get rid of the loopholes that allow Americans who make more than $1 million a year and pay a lower tax rate on their capital gains than Americans who receive a paycheck.” Stated plainly: If it goes Biden’s way, instead of a marginal tax rate of 20% on capital gains — like the sale of stocks and real estate, for instance — the super-rich must soon pay a 39.6% tax rate. That is double the current rate, and equal to the future maximum income tax rate, which Biden likewise wants to slightly increase. In addition, multiple states have their own taxes on capital gains and an investment income tax rate of 3.8%. In other words: Those who earn their money by trading capital investments — and that goes for all the super-rich — will soon be asked to pay properly. Biden has made it his goal that capital should be taxed exactly like earned income in the future.

A Lurch to the Left

Biden’s plans show that the Democrats have lurched to the left on important questions of fiscal policy in the past few years. Under Barack Obama, who was advised by Wall Street-affiliated Clinton allies, George W. Bush’s tax cuts were extended. Starting from 2013 there was merely one small tax increase on capital gains in order to fund the Affordable Care Act. Overall, in the past few decades taxes for investors and the wealthy have, with few exceptions, known only one direction — down. According to calculations by two economists, Gabriel Zucman and Emmanuel Saez, in 1950 the richest 400 U.S. families altogether paid just under a 70% tax on their income. In 2018 it was only about 23%. By contrast, households in the bottom half of income brackets paid a 24.2% tax; that is actually slightly more than in 1950.

Even under Democratic governments, little has changed in regard to the unequal tax burden — most of all because since the 1990s more and more Wall Street-affiliated advisers have gotten a foothold in the Democratic Party. Only after the financial crisis in 2008 and the subsequent Occupy demonstrations did a broader movement form for higher taxation of capital gains and high wealth in general form. In particular, the avowed socialist Sanders, and later, as well, financial expert and senator from Massachusetts Elizabeth Warren, pushed for tax increases. However, they were never able to succeed with their demands. Those who pushed for redistribution lacked political power. Instead of the two left-leaning presidential candidates, Biden, who throughout his decades-long time in office as a U.S. senator was better known as a friend of the finance industry and who charmed wealthy private donors during the election, succeeded in the Democratic primary last year. At the same time, Biden had already proposed an increase to the capital gains tax during the election.

However, it’s common in U.S. politics that some campaign demands fall by the wayside after the election. The promised minimum wage increase, for instance, which Biden promoted with the left wing of the party for support, didn’t make it into the COVID-19 relief package in March due to resistance within the party and procedural problems. The fact that Biden seems to mean it more seriously now with the capital gains tax has a simple reason. His political plans are costly. The aforementioned COVID-19 relief package costs around $1.9 trillion, the planned infrastructure package would cost $1.8 trillion. In order to fund these plans, there needs to be movement on the revenue side of the federal government. Biden wants to generate $1.5 trillion in the next 10 years with the planned tax hikes.

Those Earning Under $1 Million Are Not Affected

The 78-year-old caused agitation in the financial world with his demands — at least in the short term. After Biden’s plans were known, on Thursday the S&P 500 Index, which had recorded new records in the past few weeks, lost about 1% of its value. However, this mini-frustration in the stock market only lasted for a short time. Since then, the indexes are again on the upswing.

Presumably, this has multiple reasons. As Biden himself said on Wednesday, the tax hike is meant to apply only to the upper 0.3% of wealthy households. Those who earn less than $1 million a year are not affected by this. The same applies to pension funds. Therefore, 75% of investors are not affected by the tax hike. Furthermore, economists have already discovered loopholes. According to a study from the University of Pennsylvania, the super-rich could avoid around 90% of the new taxes with diverse tax-evasion strategies. Because the taxes only take effect when investments are sold, stockholders could simply avoid selling their securities, for example. It is also possible to offset losses. Instead of $1.5 trillion, the researchers from Pennsylvania came to the conclusion that the new taxes might only generate around $113 billion in the next 10 years. A general tax on high wealth, as Sanders and Warren propose, could provide a solution, but Biden rejects this measure.

Details in the Bill

And so the efficacy of the increased capital gains tax depends on the details in the bill, which, however, is not available yet. An increase on income tax will likely be formalized in it as well. Biden wants to increase the maximum tax rate for high-income earners starting from $400,000 in annual income from 37% to 39.6%. He would thus largely reverse his predecessor Donald Trump’s tax cuts in this area.

However, at $400,000, the annual income for families is set unusually high. Obama set the income threshold for the maximum tax rate in his reform proposals at $250,000. Biden’s threshold might be an electoral gift to his own clientele. The income range of up to $400,000 is where those wealthy suburban voters and academics who are increasingly becoming the Democrats’ stable voter base reside.

Another gift to Democratic donors could be the elimination of the cap on the SALT tax, which is mainly being pushed for by the establishment wing of the Democrats. In addition to federal taxes, in many Democratic strongholds like New York and California citizens are paying high taxes to local and state governments as well. Since Trump’s tax reform in 2017, a maximum of $10,000 of these local and state taxes can be deducted from federal taxes. Many Democratic members of Congress want to eliminate the cap, which would benefit high-income earners in Democratic strongholds. It’s certainly possible that Biden will have to include this measure in the bill in order to achieve a congressional majority for his reform.

It is generally unlikely that Biden’s proposals will be translated one-to-one in bill form. The new president has already encountered resistance within his own party with his moderate corporate tax reform. Sen. Joe Manchin from West Virginia in particular has so far vetoed overly sweeping reform. Because Senate Democrats have only a razor-thin majority, Manchin can cause any bill to fail with an abstention — a position of power that the 73-year-old will all too gladly take advantage of.

Wealth Taxes for the Super-Rich

However, it is possible that Biden will implement at least one part of his plan. He has the people behind him on this. According to a recent poll by Morning Consult, more than half of voters support higher taxes for high-income earners and corporations. Wealth taxes for the super-rich are also extremely popular. Now, everything depends on how resolutely Biden tries to achieve his plans. So far the U.S. president has made an impression with combative rhetoric and ambitious plans, but backed down during the negotiations on the minimum wage.

American voters, of whom just under 27 million watched Biden’s speech on Wednesday, will now pay very close attention to whether the new president follows his words with action. The next congressional elections are already next year. Normally, the party of the incumbent president loses seats in the midterms. Due to the narrow majorities in both chambers of Congress, the majority needed to pass new laws would be lost even with small losses. Biden would not be able to push through a single one of his plans in the second half of his term without approval from the notoriously uncompromising Republicans. Losses in November 2022 can only be prevented if Biden achieves his agenda. Therefore, the president hardly has a choice: He must deliver.