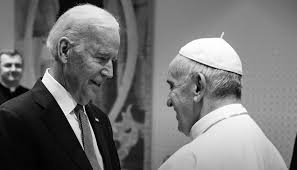 The two most influential progressive leaders in the world are — curiously — both Catholics: Pope Francis and Joe Biden.

Politicians who, like Gabriel Rufián, laugh at “talking snakes” and “impregnating doves,” will be surprised to learn that the two most influential progressive leaders in the world today are — curiously — both Catholics: Pope Francis and Joe Biden. Always carrying rosaries in their pockets, both seem more like our grandmothers than like modern, left-wing urbanites.

It is not a coincidence, nor it is a consequence. Socialism is not an earthly extension of the gospels, as some Spanish republican priests hoped for in the 1970s. Catholic doctrine does not give way to any left (or right)-wing ideology. Catholicism and progressivism are far from being synonymous, but precisely because they are different concepts, their combination can be mutually empowering.

One aspires to ethical renewal (Catholicism), the other to politics (progressivism). In its bare essence, Catholicism — and Christianity, in general — is a call to love one’s neighbor, based on individual free will; and progressivism is a plea for social justice, based on the action of the government. These are two goals often difficult to match, but if they are cleverly articulated, as Francis and Biden try, the resulting message is strengthened.

In a society wounded by radical individualism, with growing economic inequality and a sense of orphanhood, where the number of households without income grows at the same rate as that of prescriptions for anxiolytics, both the Pope and the American president offer a spiritual menu made with the two ingredients that Catholic and progressive cuisine share: equality and a sense of community.

The left is known for its commitment to equality, but so is Catholicism. The message this religion conveys, as summarized by Paul of Tarsus, is, “There is neither Jew nor Greek, neither slave nor free, male nor female.”

And the Catholic Church is also known for its commitment to the community, but this commitment is at the root of progressivism, as well, from the welfare state to John F. Kennedy. Biden captured it in his inaugural address: “Many centuries ago, St. Augustine — the saint of my church — wrote that a people was a multitude defined by the common objects of their love.”

Neither Francis nor Biden have it easy. They swim in two very different waters, but that is why they follow such a firm course.