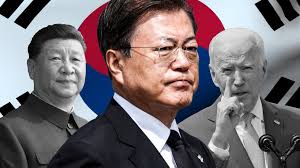 It is important that Japan, the United States and the Republic of Korea cooperate in their efforts to promote stability in Northeast Asia.

On the North Korean nuclear issue, the two leaders confirmed a policy to seek a solution through dialogue. Biden also expressed his support for negotiation and cooperation between North and South Korea.

For Moon, who has made improving relations between North and South Korea his top priority, U.S. support will be the wind in his sails. However, he must not give North Korea a chance to take advantage of Moon’s remaining term, which ends next May, and rushing to achieve results.

Biden said he would not agree to a meeting with Kim Jong Un, the general secretary of the Workers’ Party of [North] Korea, unless he makes a move toward denuclearization. This is to avoid repeating the mistake made by former President Donald Trump, who held a series of talks with Kim, but came up empty.

What is noteworthy is that Moon agreed with the U.S., whose stance is to keep China in check.

Although it did not mention China, the joint statement clearly noted the “importance of preserving peace and stability in the Taiwan Strait.” It also included “freedom of navigation and overflight” in the South China Sea and the importance of a rules-based international order, citing the role of the Quad framework that includes Australia and India in addition to Japan and the U.S.

Previous South Korean administrations have tended to avoid expressing any opinion of China’s hegemonic behavior. This time, it can be said that it went one step further.

It was also announced that South Korean companies will invest about 4 trillion yen in the U.S., in sectors such as semiconductors and storage batteries. This is in line with the Biden administration’s strategy to speed up the establishment of a supply chain that does not depend on China.

The democratic nations of Asia have been invited to the Group of Seven summit to be held in the U.K. next month; Moon will also attend. It should be an opportunity to further strengthen the ties between the three countries.