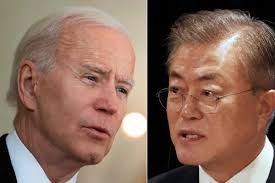 Following the South Korea-U.S. summit, North Koreans had laid low and remained silent. When they made their first reappearance on state media, many were surprised to see how unfriendly their attitudes were toward the camera. The North’s official Korean Central News Agency’s “international affairs critic,” Kim Myeong Cheol, claimed that the Biden administration’s policy toward North Korea was nothing more than a “trick,” in his piece, “An End to Missile Guidelines, but for What?”

North Korea took issue with the decision of the South Korea-U.S. summit to lift missile regulations. It claimed that the “deliberate and hostile act” by the U.S. of freeing South Korea from the missile threat was in order to “create an arms race in the Korean Peninsula and its surrounding areas and thwart the development of the DPRK.” Furthermore, North Korea added, “Now that U.S. and South Korean officials have made clear their ambition for aggression, they have no reason to blame the DPRK for strengthening its capabilities for self-defense,” and said it will face the U.S. head on, “on the basis of power for power and leadership for leadership.”

North Korea’s raising of such minor issues is nothing short of absurd. Placing the issue of national defense sovereignty aside, the lifting of missile guidelines was unfair but only to the extent that it was expected and natural. Moreover, the act was not targeted toward North Korea, which is already in possession of sufficient ballistic missiles to strike the entire South and quite frankly in no position to criticize.

At present, the North has defamed South Korean President Moon Jae-in as nothing more than a “South Joseon (Korea’s previous name) official” and is spewing all sorts of nonsense and criticism at him, such as, “It’s disgusting to see you wrapped up in guilt over the very things you brought about and spending every second just observing the reactions of others.” The harsh words and actions battering the head of state are truly unfortunate; seeing the way things are now, hopes for better North-South Korean relations have sunk for the time being.

However, the fact that North Korea expressed its complaints through the Korean Central News Agency, rather than through the Rodong Sinmun (state-run newspaper), seems to be evidence of the North’s adjustment to the guidelines declared at the summit. This can be interpreted as an intention to leave room for diplomatic communication in the future — as is North Korea’s citing of third-party opinions to label the Biden administration’s policy concerning North Korea a “trick.” North Korea was simply dissatisfied with the lack of a specific “carrot” at the Korea-U.S. summit; it has shown it has no intention of closing the doors to diplomacy.

For starters, North Korea should actively respond to the proposal for further dialogue, but meanwhile, it is also imperative that the U.S. and South Korea continue efforts to persuade the North.