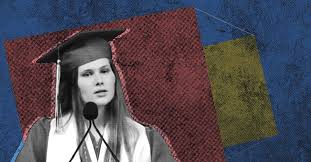 It was a graduation speech that went viral. And making that speech, on Sunday, May 30, required a lot of courage from Paxton Smith, at the ripe age of 18. It took courage to defy the existing order. Courage to stand in front of the graduating class of Lake Highlands High School. Courage, because in the heart of conservative Texas, in 2021, courage is needed to call out the misogyny inherent in the latest batch of laws, the steamroller that infantilizes women, the weight of patriarchy that controls bodies.

But there is a reason why this speech went viral. It came as a counterpoint to the conservative dialing back that has been disproportionately widespread lately. In fact, under the influence of Trumpian sirens, the Republican Party, on every level, has left its traditional mantras behind (fiscal conservatism, smaller government, reduced spending) and embraced the credos of culture wars that have the advantage of electrifying a base already mobilized by four years of inflammatory diatribes.

In this way, the fact that Republicans have control of 23 states (the legislature and the governor’s office) and control of both chambers of the legislature in seven others helps them promote a conservative agenda, electorally profitable and capable of affecting the lives of a number of Americans for the long term on several fronts.

Texas, the object of Smith’s ire, has just passed one of the most conservative abortion laws in the country. This “fetal heartbeat law” bans abortion after six weeks of pregnancy, even in cases of rape and incest, even though many women do not know that they are pregnant by six weeks. This movement extends well beyond Texas, according to the Guttmacher Institute. Since the beginning of 2021, 69 measures restricting access to abortion have been passed in 14 states, nine of which ban it completely. On top of that are laws restricting medical abortions by telemedicine in Montana, Indiana and Arizona.

In the first five months of 2021, in what the Human Rights Campaign is already classifying as a record-breaking year, anti-LGBTQ+ laws have been proposed in 41 states. Ten have already been passed. In Arkansas, Mississippi, Tennessee, Alabama and North Dakota, transgender students are banned from competing in sports on a team corresponding to their gender identity. Other measures also have consequences, as in Arkansas (and soon in Montana, West Virginia and Alabama), where a law now allows doctors, on the basis of their beliefs, to refuse to treat a person and bans gender reassignment treatments for underage transgender people.

While Texas’ school curriculum seems to come from another century with its “neutral” approach to science, and by placing creationism and evolution on equal footing, it is now going further. Just like four other states (Arkansas, Idaho, Tennessee and Oklahoma), Texas has passed a law banning the teaching of critical race theory.

New Hampshire, Louisiana, Missouri, Arizona or Utah could quickly follow. In the meantime, the effects of systemic racism in police conduct, in school structures and judicial processes are scientifically documented.

But critical race theory, which seeks to understand the lasting impacts of slavery and the impact of racism on institutional mechanisms and structures, has now been hijacked. The group Media Matters for America has shown this through Fox News’s obsessive misuse of the term, 552 times since the summer of 2020.

The Right To Vote

The numbers gathered by the Brennan Center for Justice are astonishing. This year, 14 states have passed 20 new laws that will make access to voting substantially harder for a number of Americans. Since January, 389 laws have been proposed in 48 states. Among them, 61 are being considered in 18 legislatures.

Butchering of electoral districts, reduced funding for organizations that help register people to vote and get them to the polls, reduced early voting, limits on mail-in voting and the impact from discussion of 2020’s “stolen election” all weigh heavily, and will no doubt have a noticeable impact on the 2022 midterms.

Republicans have learned over the past four years that restraint can leave a very bad taste. Now that the Supreme Court, with its conservative majority, is getting ready to rule on a number of these questions, the 2022 election season is already showing signs of a populist-conservative discourse even on the local level.