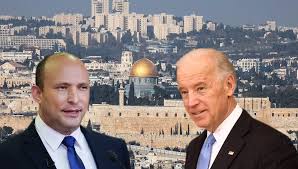 The American president was not satisfied with issuing a formal blessing for the new prime minister, Naftali Bennett. He sent Bennett a clear message, and in doing so, settled an account with Benjamin Netanyahu.

An hour after the new government in Israel was sworn in, President Joe Biden congratulated Naftali Bennett, told him that he expects to cooperate with him and emphasized that “Israel has no better friend than the United States.” It was not just another formulaic message. In that telephone conversation, Biden intended to send a clear message both to Netanyahu and Bennett.

First of all, there was the timing. Biden, who waited about a month before he spoke with Netanyahu after he was sworn in, did not wait more than an hour to congratulate Bennett after Bennett’s election. During the Netanyahu elections, Biden spoke with many world leaders, and clearly ignored Netanyahu. Biden tarried before he reached out, in contrast with his predecessors Donald Trump and Barack Obama, who spoke with the Israeli prime minister a number of days after they were inaugurated, thus indicating the great importance they placed on their relationship with Israel.

The message was clear: The U.S. president is interested in letting the prime minister sweat it out in order to make clear that what worked with Trump would not work with him; that his presidency would begin a new era; and that, in contrast to the relationship that Netanyahu built with Trump in which he got full support, Biden intends to show his cards on a variety of issues. For example, the Iran nuclear agreement, the Palestinians and the question of what constitutes proportionality in the region.

In addition, Biden had some payback for Netanyahu, who waited several days before congratulating him on his election last November, and then had a restrained conversation with Biden without acknowledging him as the “president elect.”

Now Biden is sending a message clear as day to Bennett that he needs to be on the right side. It is possible that the Biden administration has constructed a personality profile of the new prime minister from which they divine that Bennett is a person who tends to develop a dependence on having people of authority by his side.

Throughout his whole election campaign, Bennett refused to say that he would not reconcile with Netanyahu. This behavior generated much criticism in the media, but even more, was a source of disbelief. Many could not understand why, with a golden opportunity to replace Netanyahu, Bennett did not grab it with both hands. The writing was on the wall: Bennett was in a position of psychological dependence. Under these conditions, it was very difficult, nearly impossible, to act independently.

In addition to his inability to make independent decisions, Bennett broke one of his campaign promises in establishing a government with Yair Lapid. This made it clear to the U.S. that Bennett’s motivations are not ideological, but rather come from his great ambition to become prime minister, as he has so longed to be, something that is a testament to his vulnerability. We are talking about a personality type that is easily manipulated if you know how to discern his motivations and how to press the right buttons.

The Carrot and the Stick

A White House press release disclosed that Biden sent “warm greetings” to Bennett on his taking office and that the two agreed to have their administrations set up talks “on all the topics connected to security in the region, including Iran.”

The White House also announced that on behalf of the American people, it “congratulates Prime Minister Naftali Bennett, alternate prime minister and Foreign MInister Yair Lapid, and all the members of the new government.” Biden said that he looked “forward to working with Prime Minister Bennett to strengthen all aspects of the close and continuing relationship between our two countries.”

The Biden administration hinted that Biden intends to take the prime minister under his wing and take a carrot and stick approach. A new beginning, starting on the right foot — as long as Bennett plays according to the rules. The Biden administration understands very well that Bennett will play nicely as long as he gets the support that he needs. And Bennett will depend on the American government and on all its many advisers to provide Bennett the encouragement necessary so that he plays into their hands.

Biden stressed that there is no question about America support for Israel’s security. “The connection that unites our peoples is a testament to our shared values and decades of close cooperation,” he said. “As we continue to strengthen our partnership, the United States has remained strong in supporting Israel’s security. My administration is fully committed to working with the new Israeli government to promote security, stability and peace for Israelis, Palestinians and people in the whole area.”

Biden’s announcement was meant to make Bennett look good in the eyes of his voters. In this statement, the Americans neutralized Bennett’s more extreme positions so that he would continue to be embraced by Washington on the one hand, and on the other, gave him a safety net to protect him from the more radical people on the right in emphasizing America’s commitment to Israel’s security.

Biden did not mention the outgoing prime minister. This omission sent an additional message that the U.S. bears a grudge, and that just like Netanyahu, the U.S. can behave the same way toward Bennett. The Israeli prime minister, it seems, intends to pay close attention to the signals.

The author is is researcher of behavior in the digital age at the Interdisciplinary Center of Herzliya.