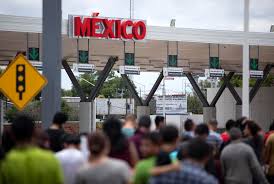 Migration will be a key subject when Vice President Kamala Harris visits Mexico.

Migration will be a key subject when Vice President Kamala Harris visits Mexico. Although President Joe Biden has given her the task of addressing the root causes of emigration, especially in Central America, Mexico should be promoting an agenda based on the opportunity offered by the demographic dynamics in their neighboring country.

Like China and other European countries, the United States is facing the progressive aging of its population. The baby boomers, the largest generation born between the end of World War II and the start of the 1960s, the most educated and economically influential group, are leaving the workforce in large numbers.

While people older than 65 represented little more than 10% of the population in 2000, in 2025 they will represent almost one-third. A decade later, they will, for the first time in U.S. history, outnumber those under 18 years old.

The COVID-19 pandemic has accelerated this process, as at least 1.7 million Americans who have the opportunity to retire early have decided to do so. As a result, many economic sectors which depend largely on workers from the baby boomer generation (from manufacturing, mining, and oil and gas extraction, to health care, education, insurance, among many other sectors), have started to register a worker deficit, especially qualified workers.

It is estimated that by the end of the decade in California, one of the most populated states, there will be a deficit of 1.1 million qualified workers. By then, 38% of jobs in California will require at least a bachelor’s degree. Currently, only one-third of all Californians hold this qualification. Although the Latino population is starting to become the largest minority, they are, together with the Black population, the least qualified.

Mexico and the United States have the opportunity to develop a bilateral agenda, to invest in a workforce that will serve both countries. This will require a link between immigration and educational policies. For example, currently in Mexico there are more than 600,000 children who were born in the U.S. who are in search of an education, but there are no policies in our country focused on resolving this situation.

At the same time, many children of Mexican origin living in the U.S. don’t have access to education for fear of being deported. To ensure these young people can pursue a higher education, the U.S. needs immigration policies that offer a road to legalization.

The two countries could also be more strategic, for example, in investing in English classes for work on both sides of the border, so Latinos, who carry the largest demographic weight, have access to the jobs left by those who are retiring.

Only around 10% of the Mexican population speaks English, while two-thirds of those who live in the U.S. and don’t speak English are Spanish-speaking.

About Hannah Bowditch 67 Articles
Hi, my name is Hannah. I am originally from UK but currently residing in Montreal, Canada, working in a bakery and trying to brush up on my French! I hold a Masters degree in Translation from the University of Portsmouth and a BA in English Literature and Spanish. I love travel and languages and am very pleased to be a part of the Watching America team.