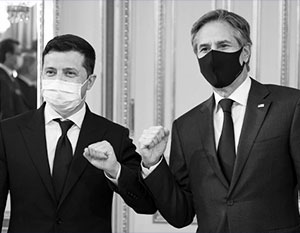 The cabinet of the Ukrainian president exerted a great deal of effort so that Volodymyr Zelenskiy could get the most out the upcoming meeting between Vladimir Putin and Joe Biden. However, this “special operation” turned into an embarrassment when Biden refused to meet with Zelenskiy. Furthermore, the White House demanded that the president’s administration in Kyiv hastily rewrite their press releases about Zelenskiy’s phone conversation with Biden. However, Secretary of State Antony Blinken got involved at this point and had a very generous gift for Zelenskiy.

Volodymyr Zelenskiy took Biden’s refusal to meet with him pretty hard. This was in large part due to the overwhelming opinion in Kyiv that this meeting was necessary for Ukraine as a state when, in fact, it was only important for the man himself. As a rule, Ukrainians constantly exaggerate the significance of their involvement in everything, whether it is a Russian-American summit or their own fate.

Even though the refusal was followed by a phone call from Washington, the situation remained strained. At least Zelenskiy was able to plead for a telephone conversation. But this was Biden’s first call to Zelenskiy. It was a stark contrast to his close relationship with former Ukrainian President Petr Poroshenko, with whom Biden, vice president at the time, would spend hours on the phone, more than he does with his wife, according to Biden himself.

During his phone call with Zelenskiy, Biden said many pleasant things, but nothing new. For example, he mentioned America’s unwavering support for Ukraine’s territorial unity. However, a diplomatic scandal followed the call, because the press teams for the two presidents suddenly disagreed about the circumstances surrounding Ukraine’s admission to NATO.

According to Kyiv, Biden “emphasized the importance of providing the Ukrainian government” with a membership action plan. Saying Kyiv’s statement was based on circumstantial evidence, the White House demanded it be retracted, and the Ukrainian press release was edited accordingly.

It is unclear why a difference in press releases was so significant to the Americans. One of the official priorities for Biden’s administration is improving relations with Germany (the official wording put it as strengthening of allied ties), a policy which was visibly weakened during Donald Trump’s presidency. This is the reason why the U.S. refused to sanction Nord Stream 2 AG, a decision that heavily disappointed Ukraine, and it was the reason for Biden’s reluctance to make a statement about the membership action plan.

Fundamentally, Washington is in favor of granting a membership action plan to Ukraine. However, some of the countries in “old Europe” are strictly against it; they understand that Russia would interpret such an action as crossing a red line, and thus would exacerbate an already horrible relationship. In fact, this unofficial group is unofficially led by Germany, whose chancellor, Angela Merkel, personally took part in the discussions of 2008, when the question of granting the MAP to Ukraine and Georgia was raised by the administration of neoconservative President George W. Bush. It was at this time that Russia set its red line.

Anyway, it is scandalous and untimely for the White House to raise a question about the MAP, especially since there is no compromise over the question in NATO headquarters in Brussels. It was extremely important for Zelenskiy to show that under his wise guidance, Ukraine was a step closer to joining NATO. Thus, in their zealous efforts, his press staff embarrassed itself with their official statement on the telephone conversation.

Kyiv tried to act as if nothing had happened and ignored any embarrassment.

Zelenskiy himself declared that “words are unimportant, what counts are specific actions.” (This can be interpreted any way one wants to.) Mikhail Podolyak, adviser to the manager of the presidential office, explained that the zeal of the Ukrainian press office was motivated by a “desire to share the atmosphere of this tete-a-tete.”

This is another demonstration of how diplomacy has degenerated in Ukraine. The best diplomats to serve in the Soviet Union’s Department of Foreign Affairs went on to work for the Russian Federation after the Soviet Union’s collapse, and their places were taken by rural nationalists and narrow-minded social climbers. Zelenskiy’s team added media managers and political scientists, such as Podolyak, to the mix. This resulted in their embarrassing edits and excuses about the “tete-a-tete.”

However, the current conversation is not about this, but about something completely different — the fact that Zelenskiy does indeed sometimes have good luck.

At the same time that this scandal was unfolding, the U.S. Senate Foreign Affairs Committee held a hearing with Secretary of State Antony Blinken. On one hand, the hearing increased skepticism concerning the public relations approach of Zelenskiy’s team. For example, the hearings refuted the Ukrainian president’s claims that the Americans did not warn Kyiv about its decision not to impose sanctions on the head company behind Nord Stream 2.

On the other hand, a generous gift more than compensated for all of Zelenskiy’s slight discomforts. It was as if Blinken suddenly and demonstratively gave the Ukrainian president a huge box of doughnuts, an event which sensible Ukrainians (yes, they still exist) had not even hoped for.

In summary, Blinken said that if all the contrivances surrounding Nord Stream 2 that are meant to conserve the transit of Russian gas across the territory of Ukraine do not work, then Ukrainians will be compensated for their financial losses and transit funds. But he added that the Europeans will have to take care of it.

Thus, the Americans gave added life to the Ukrainians’ sacred wish that the West provide funding, not even as a loan, but simply as a gift for Ukraine’s existence on the planet. Tomfoolery, of course, but something that Ukrainians dreamed about out loud during the Euromaidan. Later, reality showed that the skeptics (or rational Ukrainians) had been right. However, now they are a laughingstock. It make no difference whether or not Ukraine transports Russian gas; it will still get paid. Blinken promised.

Of course, Blinken could not promise that such a gift would be paid for by the Americans, even if their government is an enormous mechanism with a colossal amount of funding for allied support, among other things. This raises an interesting question. What is more important for the U.S. in this whole conflict around Nord Stream 2? Is it a) making a profit from exporting its own liquefied natural gas to Europe, or b) the containment of Russia, which it is eager to fund (in other words, creating obstacles for Russia’s business and development)?

During Trump’s presidency, the size of the federal government was decreased due to budget cuts, and so was its opportunity to provide aid to foreign governments. American voters see this policy of saving rather than spending on foreign affairs in a positive light. The Democrats would have been glad to undo the reduction in spending, and have done so in part. But at this moment in time, they need huge amounts of money. Moreover, the U.S. national deficit keeps growing, and thus the priorities of the current administration are social justice programs and the fight against the consequences of the pandemic, instead of feeding Ukraine and containing Russia.

All in all, the Senate would simply not have understood any bill that required raising taxes, and that is why Blinken emphasized that Europe would have to take care of paying Ukraine. The Americans will play their part, pushing all their political, economic and repressive buttons to convince the Europeans to pay up.

German political scientist Alexander Rahr has serious doubts about whether the White House will be successful in this endeavor. He told Vzglyad that, “Germany will not agree to this. After all, no one can guarantee that the money would be used for that which it was intended … Berlin can only include Ukraine in the European project of a green economy. Thus, it would receive ‘green credits’ or other aid for the purchase of windmills and production of green electricity.”

But this doesn’t really matter when viewed in light of the current public relations goals that Zelenskiy and his administration have given the threat of facing a “Maidan” over taxes.

Yes, Ukrainians are aware that Americans know how to lie, and that a promise is just that: a promise. And yet, just eight years after the Euromaidan, Zelenskiy was able to wheedle a promise out of Washington. A promise that is exactly in line with the Ukrainian national belief that European money should and will flow into Ukraine.