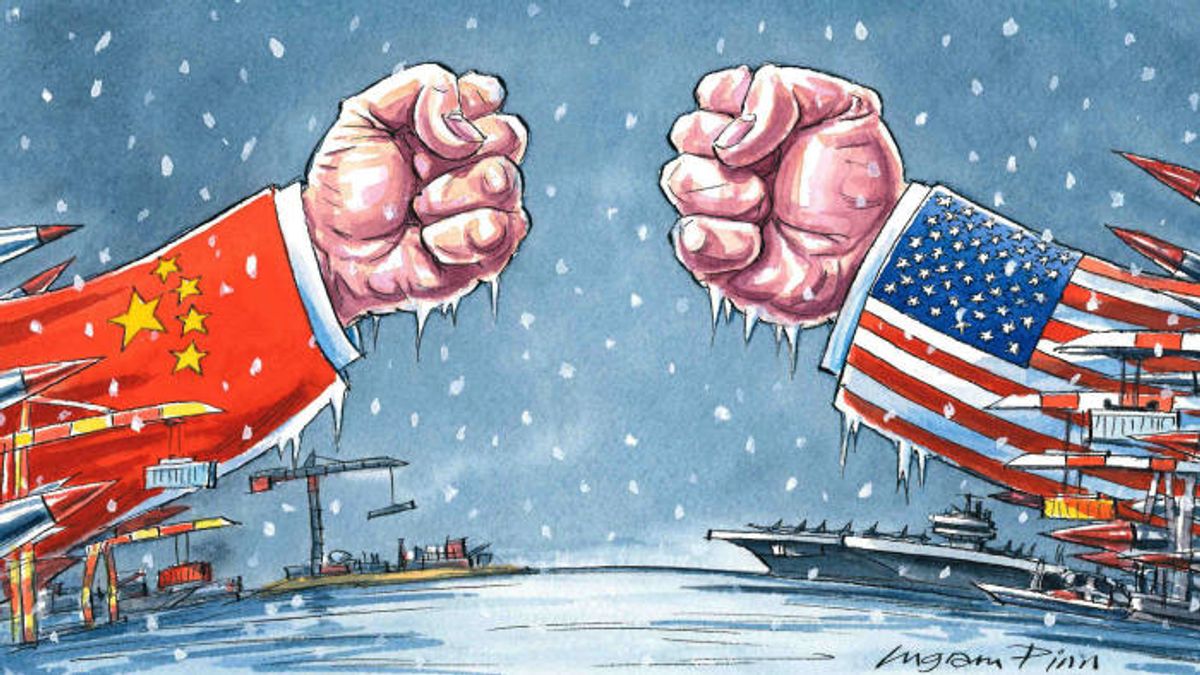 A war of influence is being waged head-on between, on the one hand, the United States and its allies, namely in Europe, and on the other, China and Russia, supported by Iran. Two visions of the world, two forms of political regimes with irreconcilable interests confront each other.

Far from the hushed discussions that usually characterize diplomatic summits, the meeting that took place in Anchorage, Alaska was more than a little icy. On March 18, U.S. Secretary of State Antony Blinken exchanged sharp words with his Chinese counterpart, Yang Jiechi, during their conversation on neutral ground. From their entrenched positions in front of the cameras, both men talked at each other in a war of words that has rarely been so heated, the American accusing China of “actions that threaten world stability,” while the Chinese denounced the United States for seeking to “advance its own democracy in the rest of the world.”

Rarely has the opposition of two antagonistic blocs competing for hegemony over the rest of the globe been so openly on display. While the concept of the Cold War has been relegated to the dustbin of history since the collapse of the Soviet bloc, it is once again being used to describe the brutal face-off that now shapes the international balance of power.

In recent months, the fog that the Donald Trump years had maintained over the world order has cleared. If the former American president showed great complacency toward Russia and autocratic regimes, there is no longer any ambiguity: A war of influence is being waged head-on between, on the one hand, the United States and its allies, namely in Europe, and on the other, China and Russia, supported by Iran.

In the last few weeks, skirmishes have multiplied, with sanctions against Chinese leaders by the United States in condemnation of the violent repression of the Uighurs; a serious violation of Taiwan’s airspace by China as the island just signed an agreement on enhanced security cooperation with the Americans; renewed tensions between Ukraine and Russia in the Donbass region; and the brutal kidnapping by Belarus of an opposition journalist after hijacking an airliner under the noses of the Europeans.

Bloc against bloc, here are two visions of the world, two forms of political regimes with irreconcilable interests that confront each other. Long gone is the time when the Western camp, in the wake of the fall of the Berlin Wall, naively decreed “the end of history” and the eventual advent of democracy coming alongside a liberal economy. Today, the United States and its allies are forced to admit that the rule of law, far from being predominant in the world, is being contested, if not rejected, by the growing influence of illiberal countries.

Joe Biden was the first to sound the alarm in February: “Democracies are under attack,” he warned, before reassuring his allies that “America is back.” In a tribune published on June 6 in The Washington Post, he drove the nail home, a few days before his meeting with Vladimir Putin, planned for June 16. “There will be no doubt about the resolve of the U.S. to defend our democratic values,” he said, as he promised to consolidate his “alliances” in the face of growing threats from Moscow and Beijing.

These declarations are not just a façade. Western countries are now being attacked on their own soil, as we have seen with the serious interference of Russian hackers in the 2016 American election. Computer attacks and cyberwarfare, infiltration of institutions, misinformation campaigns and fake news: Russia and China use all the modern techniques of destabilization, which do not exclude good old criminal methods such as the attempts to poison Russian opponents in Europe.

In France, Russian influence is felt through complacent media and political relays, many of which play into the hands of the extreme right. The new Cold War must be taken seriously because it is now being played out at home: Against the spies who come in from the cold, the weapons of democracy — freedom of expression, power of the press and support for opponents of authoritarian regimes — are more important than ever.

About Mireille Dedios 45 Articles
I’m an independent French translator based in the Boston area, certified by the American Translators Association (French into English). I honed my translating skills as part of the executive teams of various French and US companies, including State Street Corporation, where as a member of the Public Relations team, I tracked the news media globally and translated press releases into French. I enjoyed this work tremendously and continue to look for opportunities combining translation and news coverage, culture, history and international relations.