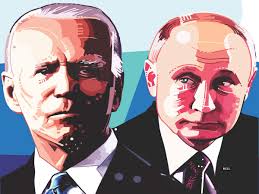 A “relationship between two powerful and proud countries” were the words spoken by U.S. President Joe Biden to Russian President Vladimir Putin.

We must wonder: Did the pride of two superpowers divide the world in two after World War II? If it is that sort of leadership consciousness, we hope that it will bring about cooperation that will benefit the entire international community.

The first face-to-face U.S.-Russian leadership summit meeting since the start of the Biden administration was held in Switzerland. If we consider that present conditions between the nations are the worst since the end of the Cold War, we ought to appreciate the fact that direct talks even happened.

However, these talks are only a starting point. Mutual challenges continue to pile up. Both leaders must be aware of their heavy responsibilities as nuclear superpowers, and must aim for definite progress.

A brief joint statement released after the summit declared that “a nuclear war cannot be won and must never be fought.” A 1985 consensus between President Ronald Reagan and Mikhail Gorbachev, general secretary of the Communist Party of the Soviet Union, included the same words.

The meaning of these words is significant, for they express a reaffirmation of a resolution not to return to a time when the world lived in fear of nuclear war.

The biggest challenge in future discussions between the two nations after reaching this consensus is arms control. This year, the New Strategic Arms Reduction Treaty was extended for five years just before it expired; except for that treaty, no further agreements have been decided.

In order to put the brakes on an emerging China’s arms expansion, the U.S. and Russia, which both possess overwhelming nuclear power, must take the initiative in disarmament talks and draw up a comprehensive framework that includes China.

The issue is not just nuclear weapons; the U.S. and Russia are the world’s two largest exporters of weapons as a whole. They bear the responsibility of worldwide national security in the space and cyber realms, and there are many urgent diplomatic problems, such as the Syrian humanitarian crisis and the Iranian nuclear problem, that require coordination and compromise.

Yet the layers of mutual distrust between the nations is deeply ingrained.

On one side, the U.S. has spearheaded sanctions against Russia for not adhering to the rule of law. On the other, Russia conspired to split U.S. relationships with its allies.

In both countries, hostile domestic public opinion and political conduct toward the other side has strengthened, and the pipeline of dialogue between the two countries has been said to be at its “lowest ebb since the Cold War.”

Biden might be bearing in mind the lesson that former U.S. attempts to democratize Russia invited Putin’s suspicion.

The Biden administration is making the rivalry with China its first priority. The more conciliatory approach to Russia may be an attempt to ward off a conflict on two fronts. But conversely, in addition to Putin’s antagonism toward the U.S., Putin emphasizes the importance of Russia’s cooperative link with China against the U.S. From this point on, the outcome of the bargaining between the two is difficult to predict.

It is understandable that while Russia denies all culpability for human rights violations and cyberattacks, Biden calls for a “relationship that has to be stable and predictable” between the U.S. and Russia. As long as that relationship between the two is turbulent, global stability cannot be envisioned. We hope to see progress with further constructive dialogue.

About Dorothy Phoenix 39 Articles
Dorothy is an independent video game developer, software engineer, technical writer, and tutor, with experience teaching students how to program and make games. In addition to programming and video games, Dorothy also enjoys studying Japanese language and culture. One of her goals is to exhibit a game at the Tokyo Game Show someday.