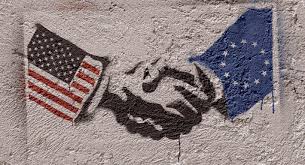 According to most world power classifications, as a superpower, the U.S. considers Europe a strategic ally. This alliance was formed after World War II, and was particularly strengthened by the establishment of NATO in 1949. Today, NATO boasts 30 member states, most of whom have joined in the years since its founding. This includes Turkey, which joined in 1952, the Federal Republic of Germany, which joined in 1955, and the Eastern Bloc countries, which have been gradually joining since 1999, following the fall of the Warsaw Pact.

Another organization, representing around 447 million people in Europe, has come into existence in the meantime: the European Union. Unlike NATO, which was founded by the U.S., the idea for the EU was conceived within Europe. It was intended to be a symbol of European identity and an organization that would allow Europe to act as an organized world power able to address the U.S. with a united voice.

Former President Donald Trump had a contemptuous relationship with NATO, and his approach to the EU showed that he supported its dissolution. For example, he supported the U.K.’s decision to leave the EU, and when it came to international trade, he pushed to make Europe more dependent on the U.S. This was illustrated when he pressured Germany to supply its natural gas needs from the U.S. rather than from Russia. Such behavior by an American president prompted the leaders of the largest European countries to think about “diplomatic and strategic autonomy” for Europe and altered their view of the U.S. as a European ally, particularly because such behavior took place during a period when Russia was involved in a conflict with Ukraine, and when it became clear that China is a full-strength technological superpower that could hold its own against Europe. The commercial rivalry between the U.S. and Europe, France’s decision to subject U.S. commercial giants to additional taxes and Trump’s response of enacting high tariffs on French products entering the U.S. are all examples of the drop in trust between the two sides of the Atlantic. It also must be remembered that large European countries like Germany, the U.K. and France do not enjoy equal footing in NATO and the EU, and they do not all have the same expectations of the U.S.

According to polls that were conducted recently in 11 EU countries, more than 70% of respondents said that Germany has the greatest influence over Europe, while 9% and 7% listed the U.K. and France, respectively. In another poll, up to 75% of French respondents said that Germany is the No. 1 power in Europe. Even though London has left the EU, it remains a close ally of the U.S., while Berlin and Paris have different expectations of the U.S. The new U.S. president, Joe Biden, in an 8-day trip to three European countries, acknowledged the damage that U.S. relations with Europe have suffered and outlined several initiatives meant to repair relations and create new expectations for the two sides of the Atlantic. On Wednesday, June 9, Biden paid a visit to a coastal city in Southwest England and met with the leaders of the EU. On Monday, June 14, he went to Brussels, and after meeting with NATO leaders there, he finally traveled to Geneva on June 16 and met with Russian President Vladimir Putin.

In contrast to Trump’s “America First” policy, Biden seeks to emphasize that America is back in Europe. To show that he is taking NATO and the EU’s perspectives into account, Biden consulted with members of these two groups prior to meeting with Putin. Before traveling to Europe, he lifted sanctions on the Nord Stream 2 pipeline under construction to transport Russian natural gas to Germany, an action meant to show that his nation’s policy toward Germany has changed. U.S. relations with Germany were particularly damaged during the Trump administration. In one poll, 51% of Germans said that they did not consider the U.S. a reliable partner. Given these developments, it would seem that although Washington is prioritizing its relationship with London, the U.S. is basing its relationship with Europe around Germany as the uncontested first power in Europe, as evidenced by Angela Merkel’s imminent trip to Washington, D.C.

On the other hand, the differences between French foreign policy and that of Germany and the U.K. indicate that Paris believes Biden’s intention to put America back in Europe means a division of labor between the two sides of the Atlantic, rather than the U.S. retaking a leadership position. Since the days of Gen. Charles de Gaulle, the French have wanted their country to be in NATO and to have a military force in the pact, albeit under the command of a French general. French President Emmanuel Macron, whose country is considered by many to be the third largest power in Europe, shares this ideological heritage with Gen. de Gaulle. He wants France to be a leading power in NATO and Europe, something that the U.S. does not readily accept. Because of this, many French strategists believe that Biden’s “America is Back in Europe” is really just Trump’s “America First” in different words.

Biden knows Europe better than any previous U.S. president, and he tried to show that he values his strategic allies there during his recent visit. However, he expects Europe to stand beside the U.S. to counter the growing influence of China and the military consolidation in Beijing. At the same time, many European political experts believe that, because of the previous positions the Trump administration took, and the fact that there is no guarantee Biden’s successor won’t share Trump’s extreme views, it is better for Europe to remain a strategic partner of the U.S. rather than an ally. This preference is based on the United States’ concern over Chinese technological superiority, as Europe doesn’t see a need to participate in this competition or be forced to ignore the powerful Chinese market and investment opportunities.

During Biden’s recent visit, he emphasized the importance of Western democratic values in contrast to the values of authoritarian governments represented by China and Russia. By doing this, he is trying to force Europe to stand by America’s plan to confront China and Russia, insisting that any sort of deviance from U.S. policy on China and Russia would constitute a violation of their values. On the other hand, Biden recommended that the Europeans should come together to draft a plan outlining widespread cooperation with the U.S., and he gave them a year to make it happen. Among the subjects mentioned was the competition between the American Boeing and European Airbus companies. The U.S. also asked the other members of the pact not to interfere with NATO troop movements within Europe.

One of the problems with NATO and the EU is the diversity of their members. Eastern European countries that used to be at the mercy of the Soviet Union and the Red Army more widely support U.S. policies, compared to western European nations that believe a threat like that of the Soviet Union no longer exists. Trump negotiated with Putin as though he were the leader of a regional power, but the recent meeting between Biden and Putin was considered by Russians to be a meeting of two world powers. Whether Russia is a regional or global power, thousands of its forces are concentrated on the country’s border with Ukraine, which is extremely worrying for the Eastern European nations. The large powers of Europe reluctantly understand the worries that the Eastern European members of NATO and the EU have, but prefer cooperation with the Russians over confrontation.

Of course, the Americans also have their own worries about the future of Germany and France. Merkel will soon step down as German chancellor, and next year France will have its own presidential election. It’s not clear who exactly will take the reins of these two nations. The possibility of a far-right figure coming to power in France still exists, and until Merkel’s replacement is in place, Washington still needs to be concerned about that nation’s future. We should also not forget that U.K. Prime Minister Boris Johnson is reluctant to admit that there is any special relationship between London and Washington. Rather, during his recent meeting with Biden, it was clear that he prefers the relationship between the two countries to be one between equals.