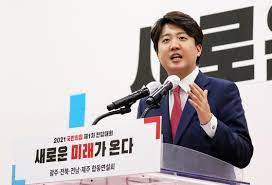 The question of when we would see the ideology of the Trump administration in Korea has been a subject many are interested in. Driven by a right-wing populism that advocates for conservative social and cultural values and rejects the established elite on both the left and the right, this ideology has appeared here in the form of a person who is vastly different from Donald Trump in age and style: Lee Joon-seok.

In the beginning, both insiders and outsiders speculated that we would see Trump’s ideology show up in someone who was similar to Trump in age and character. Many thought that individual was former representative of the Liberty Korea Party Hong Joon-pyo. Hong, like Trump, belittled the establishment on the left and the right, actively defended conservative right-wing values and used strong language and aggressive action to achieve his ends. But Trump has arrived instead in the form of someone with an air that is quite different from Trump and Hong, someone as successful as Lee Joon-seok in becoming the leader of the People’s Power Party.

Trump’s election to office resulted from a combination of anti-Democratic sentiment among Republican supporters and dissatisfaction from less educated, white lower and middle class populations. Similarly, Lee’s election as party leader is a culmination of anti-Democratic sentiment from People’s Power supporters, that is, a desperate desire to restore the party’s power, along with the discontent of young people in their 20s and 30s. In the United States, the election of Barack Obama as the first Black president in U.S. history provided context for this movement. In Korea, it was popular disappointment in the Moon Jae-in administration, which was born of the 2016-2017 Candlelight Demonstration. Common to both of these cases is that the expectations of the liberal and progressive regimes were not met.

The desire of American Republicans and the People’s Power Party in Korea to restore power to their party meant fully accepting the criticism from the lower and middle class white population and young people in their 20s and 30s of the establishment elite and of older generations. This resulted in a movement to completely change the face of the party and find someone new, not a well-established politician. The public wanted something novel, but also familiar. Based on these criteria, they were led to choose Trump and Lee, people who were constantly covered by the media like celebrities.

Hong was no longer a viable political candidate the moment this criteria calling for “new but familiar” appeared. In addition, Hong was also missing something else: “good specs.” Trump was the most coveted millionaire in the United States. Lee had the education and respect that all young people in Korean society crave. In contrast, Hong was all too lacking.

Lee and Trump each have their own style but are achieving the same goals. Trump uses strong language to make unreasonable claims, while Lee uses sophisticated words to reject existing unreasonable claims. Both point out reverse discrimination and claim there should be fair competition. They both claim that the minority class discriminates against the existing majority sector.

The less educated, white, lower and middle class people who support Trump are angry that their fair share has been reduced by minorities and immigrants. Korean people in their 20s and 30s, especially young men, who support Lee argue that preferential policies for women and the weak create unfair competition.

Trump continued to fan the flames of violence and racism in the U.S. by blaming liberals and people of color for the racist riots provoked by white nationalist forces, while at the same time, he filled positions in the White House with older white men, and claimed that he made fair decisions based strictly on individual merit.

On the other hand, Lee wrote a book entitled “Fair Competition,” in which he argues that the system of giving extra points to women, young people and the weak is not fair. In it he says, “The world is a jungle where everyone is free. The law of the jungle, the principle of the survival of the fittest … this is nature’s providence.”

The contradiction between Trump and Lee and their supporters lies within that point. It is natural for Trump and Lee to claim that survival of the fittest and the law of the jungle create fair competition because by that logic, they are the winners. However, the very people who are dissatisfied with that reality are the ones who support Trump and Lee. It is paradoxical that Trump and Lee, two people who have benefited and won the most from their established systems, are speaking for those who have been left behind and are dissatisfied with the system.

The people who support Trump and Lee need to reflect on whether the identity politics of progress have also played a role. Since the 1968 revolution, any movement to improve the overall socioeconomic standing of society has failed to gain momentum, and the proportion of mobilization politics which depend on the identity of the minority and the weak has increased. In the face of polarization, the lower and middle classes of many groups, which are traditionally the driving force of any progressive movement, have turned conservative during the chaotic cultural war over sensitive identity issues such as race, gender or religion. This is yet another reason why Trump has emerged in South Korea, and it bears repeating that Trump has arrived in South Korea in the shape of Lee.