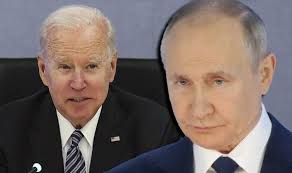 I concluded last Friday’s column by stating that expectations in the United States for the Joe Biden – Vladimir Putin summit were incredibly low. The summit took place, and we are hearing about how Biden did not clearly describe America’s red lines to Putin. As for the anti-Russian hawks in Washington, they are accusing Biden of trying to appease Putin. And Biden indicated that he found the results of the summit constructive. In response to CNN reporter Kaitlan Collins who asked Biden, “Why are you so confident [Putin] will change his behavior, Mr. President?” Biden scolded the reporter saying, “What the hell? … When did I say I was confident?” Biden later apologized for his reaction.

Certain analysts are interpreting the Geneva summit as neither a victory nor a disaster for the two leaders. If there is one positive result from the summit, it was an agreement on returning the U.S. ambassador to Moscow and Russia’s ambassador to the U.S. to their respective posts. The two world leaders underscored that they want dialogue on strategic stability to continue. However, wishing and hoping does not amount to a plan in the realm of foreign policy.

We have known since the beginning of the 2000’s that Biden is extremely suspicious of Putin. I mentioned in last Friday’s column that Biden published a very hurtful article in Foreign Affairs about Putin and Russia, disclosing his approach to Russia. However, there is a famous saying, “Heavy is the head that wears the crown.” Biden’s hesitancy to bare America’s teeth to Putin in Geneva is relevant to this adage. With respect to Biden’s Geneva summit, his dictum that “all foreign policy is an extension of personal relationships. It’s the way human nature functions,” is being widely discussed. As a matter of fact, Eric Edelman, who served as under secretary of defense during the George W. Bush era, commented on Biden’s words in an article he published on April 17 in The Bulwark, one of the new publications from anti-Trump neoconservatives. The article is headlined “How We’ll Know If the Biden-Putin Summit Was a Success? And why foreign policy is not just ‘a logical extension of personal relationships.’”

“The Biden administration set the bar so low for the president’s Geneva summit with Vladimir Putin that it was pretty much foreordained to be a ‘success,” writes Edelman at the beginning of the article. Edelman states that he is uneasy because Biden mentioned Putin as a “worthy adversary.” According to Edelman, this labeling does not force Putin to change his antagonistic behavior toward the U.S. and the West; on the contrary, it pushes him to behave in the same manner.

Another subject that Edelman draws attention to is the lack of political unity in the Biden administration on the topic of Russian policy. According to Edelman, it seems that the Biden administration was divided over two contrasting approaches. On the one hand, there were those who defended a harsh approach; on the other were those who wanted to take a more delicate stance against Russia with allies like Germany, a position that would prioritize the United States’ commercial interests in its relations with China and Russia.

Another suggestion posed to American media was that the U.S. should conduct a ‘silent’ yet effective political war against Russia. Kristofer Harrison, another writer at The Bulwark who served as an adviser in both the State Department and Defense Department during the George W. Bush era. He suggested five strategies to box Putin in in an article headlined, “Here’s How Biden Can Wage Political Warfare Against Putin.” Harrison recommended turning Russia’s local problems into a national problem. In addition to creating anti-Putin media networks, Harrison suggested that Biden find a way to pull the plug on Russia’s Nord Stream 2 natural gas pipeline. All these suggestions include activating the Global Magnitsky Human Rights Liability Act that enables U.S. sanctions against Russia. We should remember that this very law was enacted by Congress with Democratic and Republican support during the administration of Barack Obama.