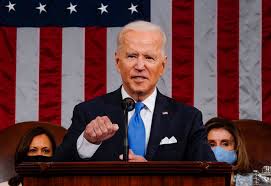 Recently, U.S. President Joe Biden decided to give us a lesson on theory, saying that human rights are a birthright and do not come from the state. We remember this hypothesis. It’s called “natural rights.” It was written in various declarations something like this: human rights are inalienable and are guaranteed from birth. Here, they say, is a person, and here are his rights. They are natural. Just like urinating or having a bowel movement.

It’s a very lovely theory. And it’s even useful in terms of humanism. Yes, but it is absolutely meaningless and declaratory — that is, it’s only suitable for declarations. A real legal system cannot be built on it, nor can the history or modernity of law be studied from a scientific point of view.

Take, for example, Robinson Crusoe, who is on a deserted island. What rights does he have? It would seem that he has every possible right: to go left and right, to catch fish or not to catch fish, to sing songs, or to sleep all day. In reality, Crusoe has no human rights because there is no society to ensure the observance of his rights through structure. And without a society and liability, there are no rights; there is just silence.

Does Crusoe, for example, have the right to life? And does a poisonous snake know about this right, and is it prepared to respect it? But then Friday appears with his own rights and responsibilities. Crusoe, for some reason, decides that Friday should serve him. And that it’s even Friday’s right, well, to serve him too. After all, Friday is a savage and Crusoe is an English gentleman. But if he has equal rights from birth, then why is it not the other way around? How come Crusoe doesn’t need to become a servant to Friday? Perhaps because Crusoe has a rifle? Hmm. It turns out that it is no longer a theory of “natural right,” but a sort of “theory of violence.”

Actually, in a class society the real human rights are determined by one’s place in the social hierarchy. But even in a geopolitical, classless society, the rights are precisely “ensured,” recognized and established by the society. And the specific scope of rights depends on the level of societal development and on its concept of life.

From birth, a person is a biological being who has yet to acquire any legal rights or becomer a member of society. A newborn can immediately possess some property — namely, he may have the right of ownership. However, this is dependent on the corresponding positive right, such as state laws and the actual endowment of his property by parents or other persons. Everyone has the right to life. This is indisputable, but on the other hand, the laws of the state can order mandatory mobilization in the event of war, and a person is likely to die in a war. The right to life is therefore surpassed by the obligation to die for the motherland.

In addition to the natural rights doctrine, the social contract theory is the foundation of the state. They say that people with “natural rights” gathered, agreed and established a state. This never happened before and isn’t happening now. More specifically, it just never happened. This theory is purely speculative; it has never been confirmed by any historical data. It’s just a beautiful fairy tale that justifies, as it were, democracy under the bourgeois regime.

I remember how this democratic theory was taught to us in law school with the Soros Foundation’s textbooks. And intelligent students immediately pointed out that this is absolute nonsense! It’s pure speculation and doesn’t reflect the truth at all! And do you know how they explained to us how they are correct? Here’s how: Look, of course it’s a stupid doctrine but in following it, the Americans have jeans and automobiles, while we have none. This means that they aren’t that stupid!

This phenomenon is called pragmatism. I was delighted to find it in a dictionary. It was defined as “a trend in idealistic bourgeois philosophy that denies the need to know the objective laws of reality and recognizes only that which gives practically useful results as truth.” The professor shook his head and went abroad.

Thus, we have (or rather, they have) an entire state — a world power — the hegemon (well, now the second after China) — with an ideology that is based on invented fairy tales, which no one even tried to prove scientifically and historically. Everyone is simply obliged to learn it by heart and believe it on faith. And the state in question is the U.S. — big surprise!

And with a smart expression they tell their national myths at international summits as if it’s the ultimate truth. But it’s not the ultimate truth. It’s not even any truth at all. It’s a poetic declaration. And they do not agree with it, for example, in China. Not because everyone there is totalitarian and against human rights, but because in the Confucian system, the status of a person is derived from the collective. And that is not to say that this is wrong in any way, because the Chinese have been living under this philosophy for many centuries.

And there are also non-Chinese Marxists with the class theory of rights, which is much more solidly supported by historical evidence. And there are believers who get their rights from God and the holy books. There are psychological theories — psychoanalytic theories too. There’s the good old hypotheses of conquest; the Hierocratic hypothesis, the suggestive linguistic doctrine, and so on. “Natural rights” and the “social contract” are such an incredible anachronism that no one in science takes it seriously.

But the simple-minded American president continues to teach us the basics of his American declaration, as if it is some kind of revelation. This isn’t necessary. We already learned all about it and even tried to embrace the Western way, built a “democracy” and a “market” out of shit and sticks, and waited for abundance to fall on us from heaven. It hasn’t fallen. Apparently, we still have our own, different way — by using our knowledge of the objective laws of reality, through truth and scientific findings.