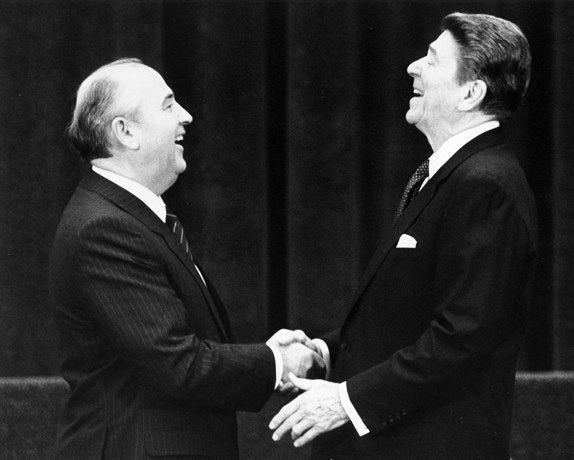 American President Ronald Reagan and the General Secretary of the Communist Party of the Soviet Union Mikhail Gorbachev met during the Geneva summit in 1985. The heads of state met for the first time at the height of the Cold War, chatting it up about science fiction, and standing together against alien invaders.

A United Front against an Alien Invasion

During a three-day conference, the leaders of the United States and the Soviet Union engaged in heated discussions over subjects like the Reagan administration’s Strategic Defense Initiative, nicknamed the “Star Wars Program,” and the reduction of nuclear weapons. In response to Ronald Reagan’s prodding on the Soviet Union’s human rights violations, which must have sounded like a lecture, Mikhail Gorbachev said, “You are not a teacher, and I am not a student.”

On the other hand, they seemed to find common ground on certain issues. With only their interpreters present, Reagan asked, “What would you do if the United States were suddenly attacked by someone from outer space? Would you help us?” Without hesitation, Gorbachev responded, “No doubt about it,” to which Reagan replied, “We too.” The United States would aid the Soviet Union in the event of an alien attack. Gorbachev would share this episode many years later.

Reagan, ever the hawk, dubbed the Soviet Union the “Evil Empire,” setting up intermediate-range ballistic missiles in Europe and prompting an intense face-off across the Iron Curtain. With fears of nuclear war growing stronger, anti-nuclear protests multiplied. It was in this climate that the Geneva summit was held, where America and the Soviet Union resumed talks on the arms race. As talks continued, both superpowers were able to rise above antagonism and build something of a mutual trust.

This trust led to the signing not only of the Intermediate-Range Nuclear Forces Treaty, but also to groundbreaking arms reduction treaties like the Treaty on Conventional Armed Forces in Europe, and the Strategic Arms Reduction Treat. The Cold War would come to an end in 1989, four years after the Geneva summit.

This June, Presidents Joe Biden of the U.S. and Vladimir Putin of Russia met in the same city. Since Russia annexed Crimea in 2014, relations have remained as chilly as they’ve been since the end of the Cold War. At first, there may have been hints that the Biden administration, preoccupied with its sole rival, the ever-growing China, viewed Russia relatively lightly. However, America was the one to propose the talks in the first place. In order to focus on the power struggle with China, it made sense that tensions should be eased with Russia.

Given the extent to which Chinese-Russian military exercises have increased, these two countries are friendly enough to be in a pseudo-alliance. However, there are fears, even in Russia, that if this status quo persists, Russia will be swallowed up by a much more powerful China. We must maintain a balance of power with America and China.

As they took up talks on the reduction of nuclear weapons and Russia’s human rights violations, Biden and Putin talked about “red lines” to prevent either of them from overstepping the other’s interests in the hopes of avoiding further antagonism and escalation. During a post-summit press conference, when asked if he’d managed to reach a level of mutual understanding with Biden, Putin said he believed there could not be trust like a family, but said he had glimpsed a sense of trust in his talk with Biden.

Of course, the road to improved relations won’t be easy. The reason relations thawed after Reagan and Gorbachev’s talks was due to Gorbachev’s bold “new thinking” policy.

If the United States and Russia do not build a constructive relationship, the international community will not be able to grow. Using these nuclear talks as a starting point, Biden and Putin must strengthen their understanding of each other through constant dialogue.

Thirty-six years ago, American and Soviet leaders discussed the threat that an alien attack would pose to mankind. The threats we face today, however, come in the form of climate change and pandemics. America and Russia must build a relationship where they can combat these issues together.