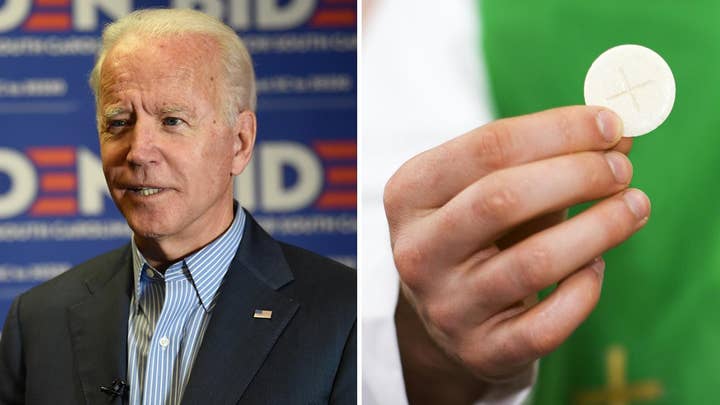 The head-on clash between the U.S. Catholic bishops and Joe Biden is intended to obstruct and limit the White House initiatives in favor of the right to abortion, euthanasia, the right of women over their bodies and the prerogatives of sexual minorities.

Abortion and communion are becoming topics of debate in the United States. From June 16-18, 168 U.S. bishops convened to vote in favor of drafting a document about the Eucharist in in response to declining Mass attendance. With complete disregard for the Vatican, conservative bishops debated whether to incorporate a section in the document about the importance of being worthy to receive Communion. They proposed the establishment of principles for determining whether Catholics in public office who support abortion and euthanasia should be permitted access to the sacrament.

The objective of the conservative bishops is to censure and deny Communion to Catholic politicians and other public figures who do not respect the church’s teachings on abortion and other questions of doctrine. The measure is aimed directly at the Catholic president, Joe Biden. Can you imagine? The scandal of denying Communion to the president of the United States!

In response to the radicalization of a large portion of the Episcopate, Cardinal Luis Francisco Ladaria Ferrer, prefect of the Vatican Congregation for the Doctrine of the Faith, penned a missive at the end of May in which he warned the bishops that such a vote would “become a source of discord rather than unity within the Episcopate and the larger Church in the United States.” Nevertheless, portions of the ecclesiastical right are still waging the culture war they unleashed on Biden during the 2020 election campaign. The majority of white Catholics voted for Donald Trump. Keep in mind that Catholics make up slightly more than 25% of the electoral base, nearly 68 million voters.

Historically, since the election of Catholic President John F. Kennedy in 1960, Catholics have split 50/50 between the two major parties in national elections. During the most recent election, both sides addressed Catholic voters with fervent calls to vote in accordance with their faith. Trump supporters rallied around their opposition to the so-called ideology of gender, claiming that faithful Catholics should not vote for Biden due to his support for abortion rights. On the other side, the Biden campaign and its supporters pointed out the incongruent personal ethics of the president, who was also divisive and showed little sensitivity to the issues of social justice that are addressed in Catholic teaching.

So, what can we make of the fact that a faction of bishops is withholding the Eucharist for political purposes, in blatant rebellion against the Vatican? Many specialists have pointed out that the good will and amicability between Biden and Pope Francis has irritated the Catholic right. Both figures agree on topics of international politics, such as climate change and the treatment of refugees and migrants. Really, their opposition to Trump unites them more than agreement on any particular issue. In the final presidential debate, Biden did not hesitate to quote the pope’s most recent encyclical, “Fratelli Tutti,” stating, “Pope Francis asked questions that anyone who seeks to lead this great nation should be able to answer.”

Undoubtedly, this complex posturing reflects the fact that the North American Catholic Church is suffering the greatest crisis in its history. David Carlin, in his book “The Decline & Fall of the Catholic Church in America,” traces the decline of the church to the 1970s, noting the institution’s failure to keep up with sweeping social changes. Nevertheless, the clergy’s child abuse scandals have in the last 25 years represented a marked loss of credibility, prestige and funding. It is estimated that the church lost 30% of its parishioners during this period. According to the 2019 report presented to the General Assembly of Bishops by Bishop Robert Barron, president of the Committee on Evangelization and Catechesis, 50% of millennials have abandoned the church. For every one that joins, six leave; 80% of those will do so before the age of 23. The median age of a person leaving the church is 13.

The crisis of the church is accented by its ever-more-conservative and politically impactful moralizing positions. The abortion debate has become a part of the political identity of Republicans and Democrats. And the Catholic hierarchy participates in that polarization, according to John McGreevy of the University of Notre Dame. He observes that the bishops, slaves to a moral vision, activate a political theology that seeks to seize the moment to enter public debate. The Democrats, in an open letter, condemn the “militarization of the Eucharist.” The risk is that clerical ambitions can be more harmful to the integrity of the Eucharist, since they will further alienate the younger generations, than the liberal Catholic politicians whom the bishops wish to restrain.

The clash between the Catholic bishops of the U.S. and Biden will ultimately obstruct the White House’s initiatives in favor of abortion rights, euthanasia, women’s rights to bodily autonomy and the rights of sexual minorities. In an editorial dated June 29, in the left-leaning but influential National Catholic Reporter, we can begin to see the drama engulfing the church: “Such a Church is broken and dying. […] We’re not going to let some hypocritical men, trying to reassert their authority after decades of a scandal of their own making, define who the church is, for us or for the broader culture. […] The smaller, purer church that former Pope Benedict XVI spoke of seems likely to become a reality. The Eucharist will be offered ‘for many,’ not ‘for all’ […] and maybe not for that many.”

We will conclude by pointing out the following paradox: The two most economically powerful churches in the world are polar opposites. The German church, aligned with the “Synodal Path,” has accommodated the secular demands of contemporary culture and the radical voices that ask for the blessing of homosexual couples and female priests. Meanwhile, the U.S. church politicizes the religion in a regressive manner, with the aim of interfering with secular rights in the public arena. Pope Francis has quite a dilemma on his hands.

About Nick Boline 16 Articles
I'm a new Spanish-English translator living in Chicago, Illinois. I have been studying Spanish language and Latin American culture for 15 years, with a special emphasis on Mexico. I hope that my work can help to bridge the gap and constructively influence American attitudes towards the countries with which they interact. In the process I am honing my skills to transition into a career as a freelance translator.