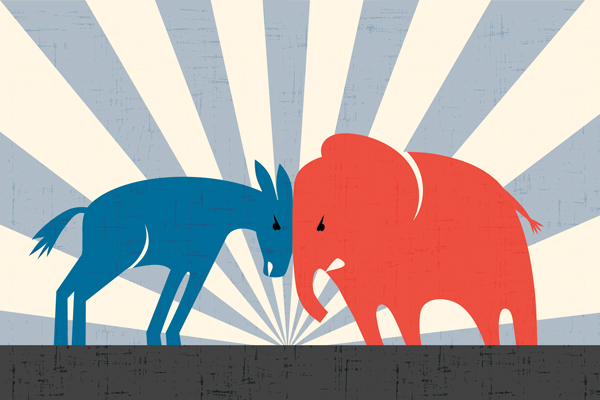 In the coming months the American political contest will bring the fundamental challenges of America and the world’s future to the forefront.

Taking a three-week break from writing columns was not very appropriate, because American politics are buzzing with activity. No matter the point of view taken, the challenges at the heart of these confrontations concern the very essence of politics in this day and age.

The Democrats and Their Reign

From the Democrats’ point of view, the capacity of a liberal democracy to mobilize state resources, the market and society in order to overcome crises of historic size is at stake.

These challenges would already be extraordinarily difficult to surmount for a government in full control of all of its levers of action, but the Democrats must compromise with small majorities, internal divisions and an opposition determined to block everything.

The American right is entirely absorbed in challenges of identity. It is plunged in a “cultural war.” The white Christian majority is destined to become a minority. Conservatives are on the defensive, which contributes to the radicalization of the Republican party, now the political instrument of a once dominant group.

Trumpism is not just a by-product of such a radicalization that leads to the perception of political adversaries as enemies to fight rather than fellow citizens. It should not be surprising that Republicans are multiplying the measures aimed at restraining the votes of those whom they see as second class citizens.

The Republican party has become a personality cult with no other goal than to cling to power in the name of defending an idealized America that never really existed, which for some justifies violence.

Regarding public politics, Republicans do not have much to propose and the enormous deficits of the Trump mandate underlines the hypocrisy of their fiscal conservatism.

The world let out a sigh of relief last November, but partners of the United States and those who still believe in the democratic model it embodies are right to be worried. The American political contest is crucial, because if liberal democracy fails in the U.S., its future is dark elsewhere, too.

For us, we have everything to gain from our powerful neighbor remaining stable, prosperous and engaged in international institutions that serve our interests. Above all, we are also plunged, in our own way, in the crises that are affecting our neighbor and we would be wise to take good note of their triumphs and avoid falling into the same traps.