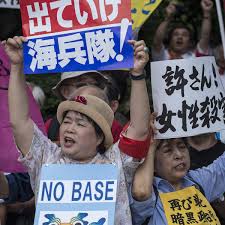 An accident occurred in the ocean in the middle of the day, a time when fishermen could have easily been operating in the area. A steel container suspended beneath a CH53E heavy lift helicopter belonging to the U.S. Marines fell into the water near Tonaki Village.

Okinawa Gov. Denny Tamaki said he intended to object to the U.S. military, saying this kind of incident “could lead to a catastrophe.” However, simply objecting is not enough. Each time an accident occurs, the prefecture requests an investigation and preventative measures, but accidents keep recurring.

It’s not only the U.S. military, but also the Japanese government that bears responsibility for exposing its own citizens to danger by not restraining dangerous training exercises. There is no longer any option aside from making the U.S. military return control of the airspace and ocean used for training to Japan. At the same time, we need to drastically rethink the U.S.-Japan Status of Forces Agreement that grants special rights to the U.S. military and have them comply with domestic laws.

Next year will mark the 50th anniversary of the Okinawa Reversion Agreement, which returned administration of Okinawa to Japan. Before this in 1965, the U.S. military airdropped a trailer that struck and killed a young girl in Yomitan Village. Since the reversion agreement, there have been more than 70 incidents of objects falling from U.S. aircraft. There have been more than 50 aircraft crashes. If you include emergency landings, this figure is even higher.

After the reversion agreement, the Japan-U.S. Joint Committee, established by the SOFA, determined the details regarding the use of the land provided to the U.S. military for bases (purpose, conditions, terms, etc.). The agreement, known as the 5.15 Memo, determines which airspace and ocean areas can be used for training. This decision was made without Okinawa’s representation, despite the fact that Okinawa is directly affected.

The SOFA recognizes the U.S. military’s extraterritorial jurisdiction. Dr. Akiko Yamamoto, associate professor of international political history at the University of the Ryukyus, points out that “The SOFA does not contain any regulations regarding training exercises, and all training is done under the pretext of travel. We can’t restrict where the U.S. military flies its aircraft.” In other words, there is no way to halt dangerous training exercises.

Alongside the 50th anniversary of the reversion agreement, Tamaki has asked the Japanese government to reduce the number of bases in Okinawa to fewer than 50% of the total U.S. military facilities in Japan. While he did not indicate specific facilities, Tamaki said at the prefectural assembly in June that “The vast airspace and ocean areas used for training are both directly and indirectly harming prefectural and national citizens far and wide, so it seems best that we request the U.S. military to return these areas to Okinawa.”

There are 29 ocean areas and 20 airspace areas around Okinawa that are under the control of the U.S. military. The prefectural government has said regarding these areas that “As a result of various restrictions, not just the land, but also the ocean and sky cannot be used freely.”

Moreover, this time the accident was not within one of these designated ocean areas. Despite the fact that the U.S. military has vast amounts of space in which to operate, a container was dropped in an area that the prefecture’s residents should be able to use freely. Okinawa’s land, sea and sky are cut off by the U.S. military.

Returning the training airspace and ocean to Okinawa is obviously necessary. Japan’s domestic laws should be applied to all of its territory: land, sea and air. In order to restore the rights that it should have as a sovereign nation, the Japanese government must reexamine the SOFA.