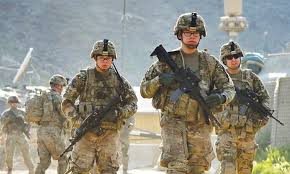 For a while now, many in the public have spoken out about the presence of U.S. military bases in Jordan. Most are opposed to the bases, since they represent a threat to national sovereignty. Of course, national sovereignty takes precedence over all other interests for Jordan. But is everything we hear about that true? Will American troops be deployed in Jordan, or has the issue been reported by foreign sources and uninformed analysts on news channels only to stir up trouble? We think it’s likely that Jordan is being targeted, as one observer has said. So what’s the story? And why hasn’t anyone stepped up to report the truth and answer the speculation with facts?

Before we report any official information, we all know that Jordan is tied to the U.S. through a number of long-term agreements. I remember the abrogation of the Anglo-Jordan Treaty in 1957 and the evacuation of the British from the airports in Amman and Mafraq. At the time, Jordan sought to reinforce its relationship with the U.S., which was an emerging world power and heir to the British Empire, rather than align itself with the Soviet Union, which occupied half of Europe after World War II. Jordan, like the other Arab nations, or indeed all nations, chose among the two great military powers. Even the neutral states at that time were being supplied militarily from either the eastern or western block, and Jordan was no exception. Since then, Washington has strengthened its military relationship with the kingdom. More than that, the training and equipping of the Jordanian army have all the hallmarks of American support, from the M16 rifles to the Continental troop carrier, or even the F-5 aircraft. Cooperation has continued until this day, as evidenced by Jordan abandoning the purchase of the Hawker Hunter plane and Siddeley Industries, something which is no secret.

Over the past 60 years, the relationship between Jordan and the U.S. has been very close despite intermittent political rivalry, especially after the 1967 and 1973 wars, in which the White House supported the regime during these two chaotic periods and the painful clashes. After the Yom Kippur War in October 1973, Jordan was quickly transformed into a Soviet military base, but the military relationship with Russia did not last, nor was Jordan supplied by Moscow, as was the situation with Egypt, Syria, Iraq, Libya, Southern Yemen and Algeria. This is what opened the doors to the Soviet bloc and complete cooperation with the Kremlin in the broadest sense. So what’s changed today? Among the official answers, as is commonly known, is a defense agreement signed many years ago between Amman and Washington. However, what’s not known is whether anyone who signed the agreement has the right to cancel it before it expires in a year.

We also know there are military agreements which have always been in place, especially during the global war on terror. Yet this war on terror has benefited the Jordanian forces in the form of joint training, weapons and military support officially reported to be equal to $1 billion a year in addition to $700 million in direct support to the Jordanian treasury. What nation in the world, especially one facing historical challenges like Jordan, wouldn’t search for a great power to lean on, given that Amman plays a critical role in analyzing and addressing many issues that plague the Arab region, and dominates ongoing regional talks in an effort to put out the political fires and bloody struggles that Jordan’s southern and eastern neighbors have faced? Despite all this, Jordan’s regime and its people have waged a battle to dismantle “the deal of the century” and rescue what remains of any progress with the Palestinian cause, a cause that is the primary pillar of Jordanian diplomacy. Jordan has also fought for the right to defend Jerusalem, its holy places and the Palestinian people.

And speaking of American bases in Jordan, it’s no secret that we are seeing foreign troops stationed in Arab countries pursuant to defense agreements or for the purpose of joint training. This reminds me personally of what I saw in the way of air operations with colleagues working for the American media. We saw a number of planes belonging to members of the international alliance shared with Jordan and the UAE to fight the Islamic State, a battle which resulted in the loss of our beloved Mu’ath Alkasasba. Yet we never heard anyone criticize such military cooperation until the U.S. announced the transfer of a group of Patriot forces from several surrounding nation to Jordan, a region that is assumed to be a safe haven for the U.S. Armed Forces, surely in accordance with previous agreements stipulating there was no conflict of interest.

This story went viral, but we don’t know how accurate it was. Still, it has raised questions about the defense agreement, the construction of private bases, and the return of American forces to Jordan, which all imply that the truth is tied to the defense terms that are stipulated in the agreements, just as we’ve seen in Turkey, Qatar, Saudi Arabia, Iraq and today, in Syria, without any agreement or request for permission. What we know for certain is that there’s no war against Iran, and even if there were, Jordanian land would not be involved. However, there is persistent and mortal danger, and these bases will threaten the security of Jordan and of Syria. The threat won’t come from us, but from the forces belonging to the surrounding nations united in the Syrian struggle, which is ripe for manipulation and attempts to extend foreign control beyond the protection that the Syrian regime is able to provide. Such a strike at the bond between the Jordanian National Army and its Arabism and patriotism, is nothing less than a failure of thinking that remains in the dark and that seeks to diminish morale as much as possible. This does not serve the national interest. No matter what, our army will remain valiant, defending our country’s heritage and remaining vigilant without rest, in order to repel any intruder or foreign intervention that would disrupt its stability, a stability that remains for many the apple of the united Arab people’s eye.