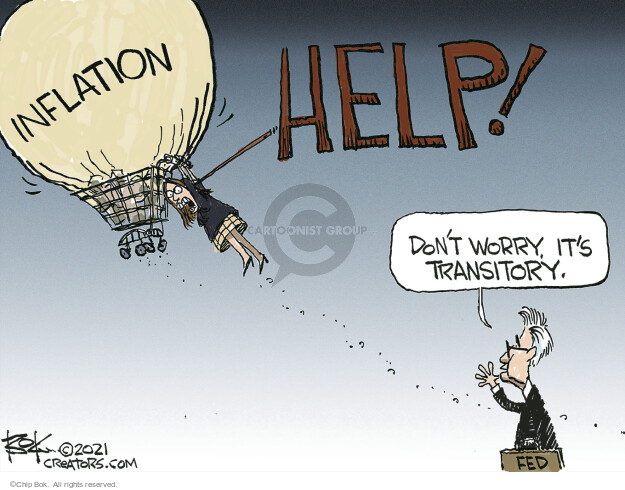 Federal Reserve officials will meet this week. Rising prices are causing them less distress than the job market. Will they repeat historical mistakes?

Central bankers can make mistakes, and pretty dramatically at that. The history of money contains several such episodes, as a warning and as a deterrent. Today we can learn some things from these.

One of the tragic figures of the history of money is Arthur Burns, a respected economist and a highly qualified professional who had previously served American presidents as a high-ranking adviser. In 1970 he was the chair of the Fed and presided over rising inflation rates for two terms, an era that would later go down in economic history as the “Great Inflation.”

Exactly 50 years ago, in July 1971, Burns sat at a congressional hearing and reported on the failures in combating inflation. “A year or two ago it was generally expected” that the “inflationary spiral” would be moderated. However, “this has not happened, either here or abroad.” Consumer costs rose back then at an annual rate of 4.5%. In the following years, inflation rose further. In 1974 the rate was at 11%; by the end of the decade it was sometimes even higher. However, Burns was no longer in office by that point.

How Could It Come to This?

In the ’70s, the Fed was considered a monetary authority that worked at the cutting edge of economic knowledge. It had assembled brilliant people who applied all the theories and methods that were popular at the time, who looked closely at the data and made all sorts of projections. “And yet, economic outcomes were disastrous,” read the judgement of economist Athanasios Orphanides, who wrote a series of research papers on the Fed’s failure in the ’70s.

Back then, the Federal Reserve wanted to conduct forward-thinking monetary policy and had clear goals in mind: an inflation rate of 2% and a growing economy with low unemployment. That all sounds reasonable — and strangely familiar. Inflation rates somewhere around 2% and employment levels as high as possible: Those are also the goals of the Federal Reserve today.

Burns’ successors are meeting Wednesday to discuss a future course. The current Fed chair, Jerome Powell, went on record last week at a Senate hearing, saying that the Fed wants to keep interest rates at the extremely low level of just above zero and wait until “maximum employment” is reached.

Recently, however, the U.S. inflation rate rose at an annual rate of 5.4%, significantly faster than the Fed’s target rate. At the end of May, there were 9.2 million unoccupied jobs in the United States. Housing prices and rent are going through the roof. Used cars are rapidly becoming more expensive. One could conclude from the data that the economy has long been overheating and inflation threatens to keep rising.

However, the Fed is acting calm: The rates will soon fall again. Special factors after the pandemic will cause temporary price increases, but they will recede after a transitional phase. Furthermore, money has to be massively pumped into the system in order to finally overcome the crisis.

Was It the Fault of the Sheikhs?

In the ’70s, the Federal Reserve watched unemployment obsessively. Economists’ predictions indicated that a rate of 4% to 5% was achievable without inflation rising. Only below this threshold would the labor shortages drive up wages; only then would companies pass on the higher labor costs to prices.

Because the measured unemployment rate was far above this value, the Fed assumed at the time that there must be all sorts of unutilized production capacities in the United States. It concluded that interest rates could be kept comparatively low without pushing inflation.

If prices rose anyway, that would have to be due to other “non-monetary” reasons outside the influence of the Federal Reserve. Rising oil prices were an obvious explanation. After the oil cartel OPEC first bared its fangs in 1973 and drastically raised the price of oil, the West had to struggle with rising energy costs. The viewpoint that America was suffering from “cost pressures” coming from the outside was widely held at the time, even in U.S. media, as the economist Edward Nelson showed.

That was a mistake. Unbeknownst to the central bankers, the economic structures had in fact changed. As later analyses would show, the inflation threshold had clearly shifted. In particular, structural unemployment had risen. The result: The Federal Reserve kept interest rates too low and spurred on inflation without unemployment falling to the intended ideal level.

There is a great amount of tragedy in that. That’s because the Fed didn’t act out of ignorance, but fully in accordance with the data that was available at the time.

Of course, hindsight is 20/20. Orphanides calculated that the Federal Reserve would have had to raise interest rates sooner, and more sharply. However, because it underestimated the price dynamics and overestimated the U.S. economy’s job potential, it was constantly surprised by far higher inflation rates, without unemployment falling.

Is history now repeating itself? The answers to this question go far beyond the United States. The Fed is still the most influential central bank in the world. Other monetary authorities follow its course. When the Fed makes mistakes, they are felt worldwide.

Currently, the Fed is working based on a monetary policy narrative that goes something like this: The current relatively high inflation rates are a temporary phenomenon. Rising prices are the fault of the pandemic and the production shortages that sometimes accompany it. This problem will soon go away by itself. This is currently the prevailing opinion, and the European Central Bank is saying very similar things. Even the finance markets believe this story so far.

The Fed’s concern lies with the job market in particular, as the detailed analyses in their current monetary policy report show. The Washington monetary authority is not just watching the number of those who are looking for a job, meaning they are considered officially unemployed, but also those who are currently not available to the job market. And these numbers are still significantly below pre-COVID levels. The Fed, it looks like, will do everything in its power to set things straight and raise employment rates as much as possible for all segments of the population, to the point where it would seem as if the pandemic had never occurred.

Nothing is wrong with this goal per se. Enticing people into the job market contributes to individual welfare and to social stability. Furthermore, it is a part of the Fed’s legal duty not just to ensure monetary stability, but also to ensure high employment — as opposed to the ECB, which in accordance with a European Union treaty is primarily bound to price stability. However, this poses the question of whether the Fed is not repeating the mistakes of the ’70s.

Into the Fog at Full Throttle

This could be correct. It could also go wrong. Lower employment numbers might be the new normal. Perhaps in hindsight we will realize that in the wake of the pandemic, economic and employment structures have massively changed, similar to what occurred in the ’70s. We don’t know.

Central banking is the art of navigating through the fog of uncertainty, equipped with rather inexact instruments. The indicators can deceive. In order to determine their position, central banks fall back on a wide array of data. It will be problematic if they try to reach multiple destinations at the same time — and if they are too convinced of their own ability to recognize the true state of the economy in real time.

The Fed’s biggest mistake in the ’70s was concentrating the course of monetary policy toward “targeting the economy’s elusive full employment potential,” Orphanides believes. It would have been better to focus only on stemming inflation.

It will be interesting to see how the story of the dollar turns out this time.