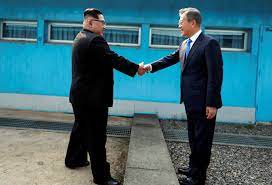 Since the restoration of the lines of communication between the two Koreas, positive signals for the Korean Peninsula continue to flow from both North Korea and the United States. According to the Korean Central News Agency on July 28, North Korean leader Kim Jong Un made no statements that heightened military tensions, such as “strengthening nuclear deterrence” in his speech to the National Conference of War Veterans on July 27, unlike in the previous year. The U.S. State Department on July 27 “welcome[d the]….restoration of inter-Korean communications lines,” and Kurt Campbell, the Indo-Pacific coordinator of the White House’s National Security Council, said he was “supportive of the dialogue and communication with North Korea.” It could be seen that the deadlocked North Korea and United States sympathize with the need to change the situation on the Korean Peninsula. It is necessary to take measures to create a forum for dialogue while maintaining this attitude.

It is still unclear what North Korea’s intentions are in restoring the lines of communication. North Korea has yet to reveal this restoration to its own people. However, chances are high that the COVID-19 crisis and food shortages appear to have changed North Korea’s attitude. As Kim announced at the National Conference of War Veterans, “Today, for us, the unprecedented global health crisis and hardship and difficulties caused by the long-term lockdown are turning into an ordeal that is no less than the crisis of war.” If that’s the case, South Korea and the United States should not miss this opportunity. If North Korea is contemplating whether or not to engage in dialogue, it is necessary to convince it of the practical benefits of dialogue. Relieving the COVID-19 and food crises could be thought of as a way to start contact between the two Koreas and between North Korea and United States, and to ultimately bring North Korea back to the negotiating table.

In this regard, the most urgent measure designed to bring North Korea into talks would be the suspension of the South Korea-U.S. joint exercise scheduled for next month. Internally, North Korea regards the South Korea-U.S. joint training as an exercise for war against North Korea, or even as a preliminary step toward war, and has responded with training every time. North Korea endures a great deal of hardship, as an enormous number of supplies must be mobilized for this training. It is for this reason that North Korea reacts so sensitively every time to South Korea-U.S. joint exercises. Therefore, suspending or even canceling these exercises could be a very useful conciliatory gesture to North Korea. It is known that South Korean and U.S. military authorities have already decided to drastically reduce the scale of the exercise. The reality is that both South Korea and the United States are having difficulty conducting training due to the fourth wave of COVID-19, and the heat wave. The South Korean and U.S. military authorities should start negotiating this suspension as soon as possible. There must be no failure in preserving this long-awaited atmosphere of dialogue.