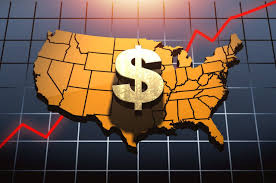 Although the United States economy is swiftly recovering from the decline it suffered during the COVID-19 pandemic, there is still concern about the future. I would like to see the U.S. engage in careful policy management so it can shift toward stable growth.

Preliminary figures for U.S. real gross domestic product for the April-June 2021 quarter show an annualized increase of 6.5%, making it the fourth consecutive quarter of positive growth. This growth rate exceeds the previous quarter’s growth of 6.3%.

The scale of this growth in GDP is said to have reached a record high, surpassing the October-December 2019 quarter before the COVID-19 pandemic. The main reason for the growth is that individual consumption, which accounts for 70% of GDP, rose to a high of 11.8%. The restaurant and retail industries are also recovering.

In addition to a promising rate of vaccination, cash payments to citizens and a policy of large-scale quantitative easing by the U.S. Federal Reserve may have proven to be effective in this economic recovery.

The recovery of the U.S. economy, the largest economy in the world and a major influence on the world economy, is welcome. However, it is important to be cautious about future risk, particularly inflation.

The Fed has indicated that this sudden increase in prices is “temporary.” When the economy reopened, people began to travel more, and as a result, there was an increase in the price of things like rental cars and airfare.

However, there are also factors to consider such as the sudden increase in the cost of raw materials. If prices continue to rise at the current rate, the scale of quantitative easing may be reduced by the Fed more quickly than expected.

In 2013, Chairman of the Federal Reserve Ben Bernanke suggested reducing quantitative easing. This caused confusion in the marketplace and led to currency and stock depreciation in developing countries. If such a reduction is being considered now, the Fed should be careful about releasing this information to avoid a similar situation.

In the U.S., the spread of the delta variant of COVID-19, which originated in India, has caused an increase in the number of new COVID-19 cases. If that forces the U.S. to constrain economic activity again, a blow to individual consumption would be unavoidable.

It is also worrisome that a worldwide shortage of semiconductors has forced a decrease in the production of things like cars and smartphones. Because of skyrocketing real estate prices, housing investment is also rapidly slowing down.

The Biden administration and Congress should hurry in implementing previously launched programs, such as infrastructure investment and child care and educational assistance, to ensure stable growth.