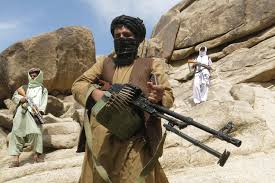 Izvestia columnist Anton Lavrov on whether the renewed American bombings will stop the Taliban blitzkrieg in Afghanistan.

After months of inactivity, the U.S. has stepped up its campaign in the skies of Afghanistan. By authorization of President Joe Biden, on Saturday, Aug. 7, B-52H strategic bombers joined the attacks on the Taliban militants for the first time this year.

The Pentagon has been trying to slow down the Taliban offensive with airstrikes for three weeks, but until now, it has been resorting to more modest means. At night, AC-130 Specter gunships, variants of transport aircraft equipped with powerful cannons and rockets, carried out strikes over the country. The MQ-9 Reaper attack drones also took part in the operation.

Those strikes were far from enough to stop the Taliban’s swift summer blitzkrieg. According to Pentagon representatives, the group has already managed to capture half of the regional centers of the country. These are usually small towns with a few thousand to tens of thousands of inhabitants. The regional centers, the provincial capitals of Afghanistan, have remained impregnable to the Taliban for years. But in the first 10 days of August, the Taliban took five of 34 such settlements. The battles are also continuing for the key centers, such as Lashkar Gah, Herat and Kandahar.*

The Taliban’s crucial victory despite the bombing was the capture of Kunduz near the Tajikistan border. The city of more than 300,000 people fell on Sunday after a short siege. Nor did the B-52H strikes help to prevent the capture of Sar-e Pol and Taleqan.

Therefore, U.S. strategic bombers were forced to switch from attacking clusters of militants and their weaponry to destroying the now Taliban-occupied bases of government troops and recapturing the military equipment left at those sites. The equipment was only recently handed over to the Afghan government.

Even after resuming the activity, U.S. aircraft make only up to a dozen strike sorties a day. Such a modest involvement shows a lack of serious commitment by the U.S. to fighting the Taliban and helping the Afghan government. Instead, the purpose of the current bombing is to buy time and to safely withdraw the last 650 U.S. troops before Aug. 31. To reach this conclusion, it is sufficient to compare the Pentagon efforts now with those at the beginning of Operation Enduring Freedom.

Enduring Freedom’s sad anniversary is fast approaching. Twenty years ago, on Oct. 7, 2001, the first U.S. and Allied airstrikes were launched against the Taliban. The first wave of air attacks was carried out by one and a half dozen B-1 and B-52 heavy bombers, dozens of fighter jets from aircraft carriers in the Arabian Sea, and a pair of B-2 stealth bombers. Cruisers, destroyers and submarines from the Pentagon and Great Britain fired 50 Tomahawk cruise missiles. Over the next two weeks, aircraft continued to destroy Taliban targets, performing an average of 63 strike missions daily.

In subsequent years, the power of the U.S. and Allied aviation combined with forces on the ground from 30 countries made it possible to liberate the main part of the territory. Still, it did not completely wipe out the radicals. The airstrikes never died down. Even in relatively quiet years, aircraft and drones attacked Taliban targets and other radical Islamist groups throughout Afghanistan 100 to 500 times a month.

Now, even the current modest assistance is not guaranteed to the Kabul government in the event of catastrophic losses. Just two months ago, Gen. Kenneth Mackenzie, the head of the U.S. Central Command, said the Pentagon had no plans to support Afghan forces with airstrikes after completing U.S. withdrawal from the country. Instead, he promised that U.S. involvement would be reduced to pinpoint operations against terrorists plotting to endanger the U.S. The recent successes of the Islamists may not force a reconsideration of this decision.

Even though there are formally almost 150 military aircraft and helicopters in service with the Afghan Air Force, most are for military transport. Two dozen light attack A-29 Super Tucanos and a dozen armed Cessna 208s can hardly replace all the power of allied aviation. Their helplessness was demonstrated in June and July.

In recent weeks, the Afghan Air Force has faced a new threat. The Taliban began to hunt down government-contracted aircraft and helicopter pilots, killing eight military personnel. They were assassinated in their homes, on the streets and via car bombings. Even the capital, Kabul, cannot be considered a safe place.

Maintaining the Afghan fleet could become an intractable problem with the withdrawal of U.S. troops and civilian contractors. Already, local technicians are being trained to repair helicopters via Zoom. Thus, pilots lack preparation, while spare parts for equipment cannot be handed over. As a result, by the end of the year, the number of combat-ready vehicles may plummet.

Air support from the U.S. that supplemented its weak air force was one of the few trump cards that gave the national army an advantage against the Taliban. Losing it would have a detrimental effect on the morale of the Afghan military.

Now, the Afghan government is trying to counter the Taliban offensive with several thousand well-trained special forces and commandos, airlifted from one threatened area to another. But with the Taliban’s revitalization, they do not have enough troops to act everywhere.

Moreover, regular troops lack enthusiasm and stamina in battle. Soldiers and officers leave their positions without serious resistance and sometimes even switch over to the side of the Islamists. Weak and scattered U.S. airstrikes will not improve this situation in any way. But their final cessation will further undermine the Afghan morale and could lead to a complete collapse of the army.

*Translator’s note: As of Aug. 13, 2021, the Taliban has officially seized Herat and Kandahar, followed shortly by Lashkar Gah.