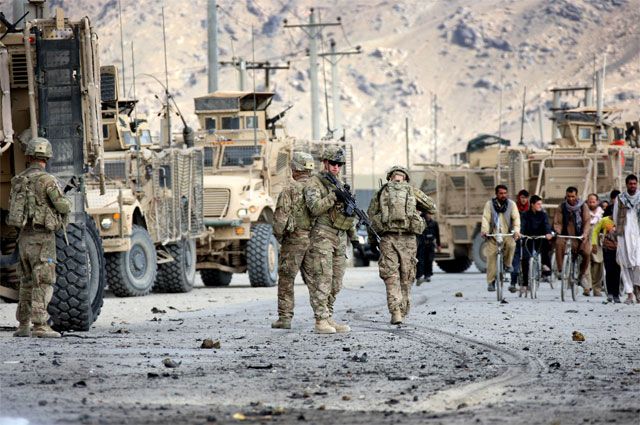 The United States’ swift departure from Afghanistan was unexpected for the whole world, including Europeans and NATO allies. Moreover, there was no reasonable explanation provided in the statement about the departure. Vyacheslav Kostikov, head of the Strategic Planning Center “AIF,” writes on this topic.

It is noteworthy that the U.S. military also promised to finally withdraw from Iraq at the same time. Apparently, the U.S. is trying to reduce the scope of its military presence to a certain extent with the intention of concentrating efforts and resources on the “new threats” that American politicians have recently loved to talk about.

NATO allies were not warned in advance about Washington’s decision. Germany, France and Belgium, whose troops also participated in the Afghan saga in small contingents, were forced to ask the U.S. to postpone the withdrawal of troops so they could prepare to leave the country. The U.S. ignored the request. Once again, the U.S. demonstrated to the world its typical “I do what I want” approach to international politics.

A Real or Imaginary Threat?

What could be the reason overseas strategists made such a decision? Perhaps, using the example of Afghanistan, Washington once again became convinced that imposing its policy of state building on countries with a different level of development and other ideological and religious traditions is a hopeless matter. The Soviet Union’s experience, in which troops were also forced to retreat from Afghanistan 32 years ago (in 1989), did not serve as a lesson to the Americans. Some say they still got off easy; the U.S. losses are seven times less than the losses of a limited contingent of Soviet troops. But the military-political result remains similar. It was described as such by Colonel-General Boris Gromov, who led the withdrawal of our troops from Afghanistan: “It was neither a victory nor a defeat.”

But, apparently, there is a more compelling reason for the unexpected change in U.S. foreign policy strategy. It is the rapid growth of China’s economic and military potential and, accordingly, Beijing’s foreign policy ambitions. So far, Washington has not finally decided who its primary opponent is — Russia or China. American politicians contradict themselves about this. But the outstripping dynamics of China’s development in comparison with Russia, as well as the accelerated growth of its military potential, may turn China into “Public Enemy No. 1” in the near future.

Voices have quietly emerged to advise the U.S. Department of State about the need to find common ground with Moscow to counter China’s expansion. “The next century should not be Chinese,” former U.S. Secretary of State Mike Pompeo said in an interview.* Washington, in fact, has already begun building a global anti-Chinese coalition. Fishing rods with anti-Chinese bait are delicately being extended not only to Europe, but also to Russia. In Moscow, they are diplomatically ignored. Russian diplomacy still adheres to the strategy of neutrality in relations between the United States and China. The response of European capitals sounds something like this: “Yes, we are NATO allies, but deal with China yourself.” Europe’s restrained reaction to Americans attempts to draw it into the anti-Chinese union is influenced not only by political prudence, but also by huge and ever-increasing economic and trade ties with China.

From the Russian perspective, the Foreign Ministry understands that by “winking” at Moscow, Washington may provoke a crisis. The brief era of Donald Trump has shown how unpredictable Washington’s policy can be. In addition, despite the nuances of Washington’s behind-the-scenes politics, the ideology and practice of the Cold War, the confrontations and deterrent sanctions, persistently prevail in the U.S. and when it comes to disseminating information about Russia. We cannot let our guard down. Joe Biden’s smiles in Geneva should not be taken as forgiveness for sins.

Russia has perceived the unexpected withdrawal of the United States from Afghanistan with both surprise and alarm. The statement from the head of the information department of the Foreign Ministry, Maria Zakharova, was predictably hypocritical. Allegedly, “it took only 20 years for the Americans to have these deep thoughts about Afghanistan,” she said. This was followed by an explanation from Foreign Minister Sergey Lavrov that “the U.S. has been contributing to the stabilization of the region for a long time.” The Kremlin immediately made it clear that Russia is not going to interfere in Afghan affairs. The speed of Moscow’s reaction can be explained by its desire to calm the Russian population. After all, people are very afraid of a new war.

The Russian authorities are worried about something else. Afghanistan shares borders with a number of former Soviet republics, which became friendly independent states after 1991. These include Turkmenistan, Uzbekistan and Tajikistan. Their armed forces are in the process of formation, and the resources to protect the borders from the flow of refugees are limited. The withdrawal of American troops from Afghanistan may expand the area of military operations of Islamist groups. Just a couple of weeks after this withdrawal, the Taliban claimed to control 80% of the territory of Afghanistan. Yet, those who collaborated with the Americans are being evacuated and are fleeing the country.** Still, concerns about the possibility of a civil war are growing louder. The former Central Asian republics of the Soviet Union, taking into account the fact that their population follows Islam, are an attractive escape route for Afghans if the current regime in Kabul were to fall.** There may be hundreds of thousands of these refugees, and there must be radical Islamists among them. This is a serious destabilizing factor. Refugee routes through Tajikistan and Uzbekistan to Europe may also run through Russian territory.

Some countries in the region have already turned to Russia for help. Moscow has responded immediately. Russian Defense Minister Sergei Shoigu visited Tajikistan and Uzbekistan. So far, additional Sukhoi Su-25 attack aircraft have been sent to the region, and joint exercises are planned.

At the same time, it’s important to note that Vladimir Putin stated that Russia has not decided whether or not to send additional contingents of troops. This indicates that Moscow is being extremely cautious in its approach to the Afghan problem.

Russia is also closely monitoring Turkey’s actions. The country takes contradictory positions, and, like many things that Ankara does with respect to foreign policy, is unpredictable. The Turks declared that they are ready to contribute to maintaining stability in the region and controlling the possible flow of refugees. Washington claims that there are agreements on this issue between the U.S. and Turkey. How will Ankara interpret these agreements? No one has seen them in writing. Will Turkey accept the United States’ consent to its new role in Afghanistan (and in the region) as tacit approval of Turkey’s dream of reviving the Ottoman Empire?

So far, both for the world and for Russia, there are more questions than answers in the tangle of contradictions around Afghanistan. Given how many complex problems there are in our own country, it would be reasonable not to go there with Soviet troops to “save the day.”**

**Editor’s note: The Taliban assumed control of Afghanistan on Aug. 16, after the original version of this article was written and published. The facts and circumstances here have changed, but the perspective presented here remains relevant.