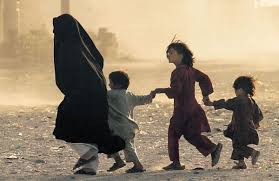 Should we call it the pitiless conclusion to the war that’s dragged on 20 years since the coordinated terror attacks against America?

The Taliban, Afghanistan’s former governing force, has taken the capital, Kabul, and declared victory. President Ashraf Ghani has fled the country, and his administration has collapsed.

The situation in Kabul at that moment was odd. Armed Taliban insurgents seized the institutions of government and even occupied the president’s office. Citizens could be seen fleeing in trucks and trying to withdraw money from banks, and American military helicopters kept evacuating American embassy staffers.

The American media called this “the fall of Kabul,” after the fall of Saigon in the Vietnam War in 1975, when embassy staffers fled by helicopter. It is a humiliating scene for America.

The Pitiless Conclusion to the Longest War

U.S. President Joe Biden’s withdrawal of the American forces stationed there spurred the instantaneous revival of Taliban control. They seized the power vacuum.

“The likelihood there’s going to be the Taliban overrunning everything and owning the whole country is highly unlikely.” Biden must regret these remarks he made little over a month ago.

In 2001, the U.N. Security Council authorized the U.S. and allies to counterattack against the coordinated terror attacks in America, beginning the war in Afghanistan.

The American and British militaries attacked al-Qaida, an international terrorist organization, and the Taliban, which harbored them, and stationed multinational battalions to safeguard the peace. The international community closed ranks to fight terror.

But the just war descended into a quagmire and became the longest war in America’s history. In the background, successive administrations lost their way in the war on terror.

The George W. Bush administration, which witnessed the coordinated terror attacks, followed the war in Afghanistan by embarking on a war in Iraq, which expanded the front against terror. The Barack Obama administration killed Osama bin Laden, al-Qaida’s leader, but then felt satisfied and disregarded nation-building in Afghanistan.

In a context of domestic war-weariness, the Donald Trump administration accelerated American troop withdrawals without heeding the despair of the Afghan people, and the Biden administration followed suit, underestimating the Taliban’s strength.

The Afghan government also bears a heavy responsibility. It misappropriated the huge amount of reconstruction funds invested by the international community for its own ends and ignored the rising voices of political distrust.

Payments to the army were chronically overdue, and the Taliban took advantage of that dissatisfaction by promising higher wages, attracting the youth. It is said that there were also cases of the latest equipment supplied by the American military being sold on the black market.

The war was decided when, as the American withdrawal progressed, the supporting government’s army could not resist the Taliban’s onslaught. They reportedly couldn’t help but surrender when major cities were attacked in succession.

Proud America stood at the helm of the war on terror; Afghanistan depended on America’s protection and could not stand alone. Its conceit and overconfidence certainly both exacerbated the situation’s turmoil.

Rebuilding the Net of Containment around Terror

The problem is how the Taliban will manage their nation. Earlier, they invited international criticism by interpreting Islamic teachings in their own way, forbidding entertainment and the education of girls and inflicting punishments like whipping.

Over these past 20 years, Afghan society has democratized little by little, and girls’ education has been protected. Now, it is said that in some regions women are banned from working. Reviving tyranny is out of the question.

The U.N. Security Council announced in a press release that it does “not support the restoration of the Islamic Emirate [Taliban].” It goes without saying that the global community must keep a close watch.

What is most to be feared is that Afghanistan again becomes a hotbed of terror. In last year’s peace agreement, the Taliban pledged to America that they would not harbor al-Qaida. However, they repeatedly broke their promises not to plunder the locals, and suspicions about the elimination of al-Qaida linger. The U.S. military fears that al-Qaida will make an earnest revival in Afghanistan within two years.

The state of the world greatly changed after the coordinated terrorist attacks. America’s exhaustion is striking — it invested about $88 billion (about 9.68 trillion yen) and lost around 2,400 soldiers in Afghanistan alone. Meanwhile, China ascended and is now in a position to threaten America.

The fall of Kabul will likely accelerate America’s loss of prestige in the international community. American-led democratization has failed, but that does not mean that the war on terror is over.

Terror is a common menace to global society. We must hurry to reconstruct an international counterterrorism network, including America, China and Russia.