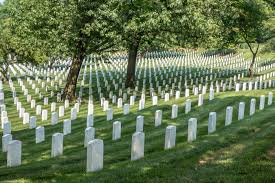 There is contemplation and silence in Arlington Cemetery in the United States. More than 400,000 people are buried there, mostly soldiers killed in military operations from the Civil War to the present. Americans don’t want any more burials in this place, especially for wars they no longer care about, like the one in Afghanistan.

Walking in the largest cemetery in the world, an open field of 624 acres, is awe inspiring. Among the visitors, silence and respect prevail. Their brothers, their parents, their mothers and their friends are buried here. Among them, more than 2,000 died in Afghanistan.

After 20 years in that South Asian country, where they came to fight and chase down terrorists, and then tried unsuccessfully to establish a democracy, the Americans are withdrawing. Their dead and wounded, who share a cemetery with those killed in the two world wars, Korea, Vietnam, Iraq and other conflicts, as well as with the country’s former presidents, appear to have sacrificed in vain.

Today, Afghanistan is in the hands of the Taliban and there is a humanitarian crisis. Thousands are fleeing the country, including women and children. The few gains in human rights made in recent years will be annulled. Afghanistan returns to the hands of groups that encourage terrorism, to the hands of fanatics who ban gambling and music and deny education to women and girls.

The withdrawal of the United States, which led an international coalition that was decreasing in number and budget over the years, is ending an era during which more than 150,000 people died, 60,000 of them Afghan soldiers and police, 400 humanitarian activists and about 54 journalists, according to Amnesty International.

President Donald Trump negotiated the withdrawal, and Joe Biden hurried to curb its increasing economic cost and loss of lives , and rushed to end it because, in addition, polls indicate that U.S. citizens no longer want to send their own soldiers to the other side of the planet. The military presence in Afghanistan is not popular.

No longer will soldiers killed in Afghanistan arrive at Arlington Cemetery, something which could intensify threats of terrorism coming from that country. The Sept. 11 anniversary of the attack on the twin towers is approaching, and Americans will again speak with outrage about terrorism.

Those of us who have been to Arlington Cemetery sense its veneration of heroism and sacrifice. There, stories of dedication and patriotism about a country that is assumed to be powerful are remembered. There is no room in that setting for accusations of imperialism or interventionism, and no one would dare to recall the accusations of abuse and torture that burden many U.S. military personnel.

With its withdrawal from Afghanistan, the United States leaves a power vacuum in a key part of the world. The invasion of the Asian country 20 years ago was called Operation Enduring Freedom. Today, “freedom” and “enduring” are empty words. Millions of Afghans have been left to the mercy of terror and fear.

About Patricia Simoni 96 Articles
I first edited and translated for Watching America from 2009 through 2011, recently returning and rediscovering the pleasure of working with dedicated translators and editors. Latin America is of special interest to me. In the mid-60’s, I was a Peace Corps volunteer in Chile, and later lived for three years in Mexico, in the states of Oaxaca and Michoacán and in Mexico City. During those years, my work included interviewing in anthropology research, teaching at a bilingual school in the federal district, and conducting workshops in home nursing care for disadvantaged inner city women. I earned a BS degree from Wagner College, masters and doctoral degrees from WVU, and was a faculty member of the WVU School of Nursing for 27 years. In that position, I coordinated a two-year federal grant (FIPSE) at WVU for an exchange of nursing students with the University of Guanajuato, Mexico. Presently a retiree, I live in Morgantown, West Virginia, where I enjoy traditional Appalachian fiddling with friends. Working toward the mission of WA, to help those in the U.S. see ourselves as others see us, gives me a sense of purpose.