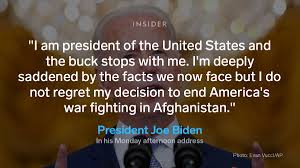 The president of the United States has made the decision he would have liked to see in 2011, but the world has changed dramatically during this past decade.

”I am president of the United States of America, and the buck stops with me.” This categorical statement was delivered by Joe Biden in his historic speech on Aug. 16, in which he justified his decision to withdraw from Afghanistan. Cutting through the niceties, he informed the public of his strategy and openly acknowledged what the media had already published back in 2009 — that he had been against his president’s increase in troop deployment. While Barack Obama saw Afghanistan as “a war of necessity” in which the U.S. had to get involved to reconstruct the country, for Biden — as it used to be for the George W. Bush administration — it was a mere counterterrorist operation to wipe out what had become a safe haven since 9/11, the most brutal attacks against the U.S. since Pearl Harbor.

In fact, two missions coexisted in Afghanistan since 2014: the U.N.-led, NATO-coordinated International Security Assistance Force and Enduring Freedom, a mission of war on terrorism. For then-Vice President Biden, the use of drones and surgical counterterrorism operations were the only possible approaches in a country that was in the stone age and where, in his view, there were no U.S. national interests at stake. The mission was accomplished the moment an anti-terrorist operation took down Osama bin Laden in Pakistan. From that moment on, the decision to leave had to be made; as Biden stated last Monday, he did not want to pass it on to the next president.

That fine line between the coexistence of U.S. national interests and the country’s cooperation with other allies is what enables building trust and either forging or preventing alliances. In that exceptional historical juncture that was the Cold War, the NATO Treaty was signed in 1949 — one of the most sensitive moments — with the automatism of Article 5, which was not invoked until September 2001. Distrust over how far the U.S. was willing to go in order to guarantee the safety of European democracies was what led Charles de Gaulle to develop an autonomous nuclear weapons program.

The internal debate regarding national interests was what prompted the Clinton administration’s withdrawal from Somalia, its non-intervention in Rwanda and its hesitancy to get involved in the Balkan conflict, a tomb for quite a few empires. Those same national interests made Richard Nixon — upon advice from Henry Kissinger — withdraw from Vietnam and open the dialogue with China. They made Ronald Reagan leave Lebanon when he had to greet coffins with American soldiers inside. And they made Obama lead “from behind” in Libya and go back on his own words when he stated during the Syria conflict that the use of chemical weapons would be a “red line.”

Those national interests are the reason behind supporting dictators or letting them fall — Egypt, the Philippines, Persia, Cuba, Chile — and behind undermining allies in Suez or remaining undaunted in Hungary in 1956 or in Prague in 1968. A particular interpretation of national interest is what made neoconservatives invade Iraq, showing a profound misunderstanding of the consequences of attempting to impose a dogmatic view about the historical reality of the region.

Are there currently any U.S. national interests at stake in Afghanistan? Biden has made the decision he would have liked to see in 2011, but the world has changed dramatically during this past decade. The China of today, Xi Jinping’s China, is nothing like the one from the past. Nor is Vladimir Putin’s Russia. The same could be said of an Iran, which today has more incentives to be a nuclear power. Furthermore, there is the historical tension between Pakistan and India.

The world has transformed. Afghanistan is once more the strategic centerpiece in a complex scenario, and that disorganized exit, abandoning an ally (corrupt, who had been given countless opportunities) raises many questions. Moreover, the country held a powerful symbolism for our time due to the suppression of women’s rights signified by the Taliban regime. The U.S. had a key position at minimal cost (as is happening now in Iraq), so a withdrawal under those circumstances is hardly comprehensible. “Our true strategic competitors,” as Biden called Russia and China, are going to fill the strategic void, as it always happens. Meanwhile, in the Middle East, in Ukraine, in Latin America, they are taking note of this decision.

It would be good if Europe took note as well. Not because of some rancid anti-Americanism, but because the U.S. is our only security umbrella. The United States has been sitting across from a haiku specialist. A few months ago, during a visit to Turkey, the highlight was an institutional battle for some chairs at an official meeting. Since Javier Solana stopped being the High Representative for the Common Foreign and Security Policy (Mr. Europe), the U.S. has not had a high-level interlocutor. The U.S. is Europe’s essential ally and it has laid its cards on the table.

It would help to start being serious and credible because, as the old adage goes, the strong do what they can and the weak suffer what they must. And the U.S. has once more been unrelenting in the defense of its interests. Regarding the position of the Spanish government, the fact that, while all this was happening, the president did not consider the issue significant enough to end his holiday and has remained secluded in the National Heritage holiday residence is indicative enough about where hard-earned irreverence leads.