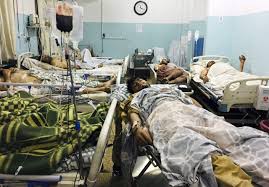 Americans have fully withdrawn from Afghanistan. Kabul airport, their last stronghold, is coming under the control of the Taliban — the country’s new government. After 20 years of occupation, it would seem that both Afghans and Americans should be content. The former rids itself of occupiers, and the latter puts a definitive end to a completely unnecessary war. But the U.S. could not even withdraw with dignity: The operation’s final days were marked by more victims among the ever-suffering Afghan population. The withdrawal leaves Afghan blood on the hands of American soldiers.

Last Thursday, Aug. 26, a terrorist attack near Kabul airport killed 13 U.S. soldiers and about 200 Afghan civilians. Islamic State Khorasan Province group,* fighting both the Taliban and Americans, took responsibility for the attack. Barbarians, terrorists. However, it has now turned out that most Afghans died not from a bomb, but at the hands of American soldiers. After the explosion, U.S. troops opened fire on innocent Afghans, fearing that the suicide bomber’s accomplices were hiding in the crowd around the airport. That is, American troops, already on edge throughout the withdrawal operation, went truly mad after the explosion, shooting frightened and wounded people. Among them were many Afghans who collaborated with the occupiers and hoped for safe passage out of Afghanistan. Instead, Americans thanked them with bullets.

But this was not the Americans’ last crime. They promised to take revenge on IS-K* and launched drone strikes on those believed to have been involved in the attack. On Sunday, Aug. 29, one such attack killed 12 people in Kabul, including seven children between 2 and 10 years old. The Americans assert they aimed at a car driven by a terrorist transporting explosives, and the death of an innocent family was the collateral damage from the explosion. But Afghans do not care what the Americans say. For them, they are just murderers.

But is it now over? After all, Americans have withdrawn from Afghanistan — will they stop killing Afghans now? Yes, they have left. However, they reserve the right to target those whom they consider terrorists, such as IS-K,* meaning that there will undoubtedly be more casualties among civilians. The entire long-term experience of American drone strikes, from Yemen and Somalia to Afghanistan and Iraq, suggests that hundreds of murdered civilians do not concern the U.S. After all, you cannot make an omelet without breaking a few eggs. But when a dozen civilians are murdered for the sake of killing one alleged terrorist, what is all the talk about high-precision weapons for? And is it really a fight against terrorism if the soldiers themselves are no better than the terrorists?

The U.S. has withdrawn from Afghanistan. But where has it gone? The very nature of its departure, which turned into a haphazard flight, caused debates about the beginning of a new world in which nobody can rely on American assistance. Neither allies nor subordinates. A world in which the U.S., riddled with internal divisions, has lost its main asset — the reputation of an almighty superpower.

In fact, the failure of the project of the world order dictated by the U.S. (or the transatlantic globalization project, to be more precise) became evident a while ago, back in the late 2000s and early 2010s, following the 2008 financial crisis and the failure of American plans to restructure the Greater Middle East, which began with the invasions of Afghanistan and Iraq.

Until then, most American elites and many of the national elites in different countries around the world believed in the reality of America’s claims to world domination. However, over the past 10 years, everything has pointed to the decline of the U.S. It still retains great might and remains the world’s most influential power, but it has increasingly become a wounded and dejected beast. Strong enough, but doomed. The world’s key capitals and the U.S. itself have understood that decline. However, those in America who want to reorient its course do not yet have the power to do so. Donald Trump’s attempt was brutally suppressed by the globalist wing of the American elite, which intensified the internal divisions and problems of the U.S.

At the same time, changes in U.S. global strategy are still taking place. America cannot maintain its former positions, and China and Russia are gradually expanding their influence and capabilities. Thus, America is leaving the Greater Middle East. After Afghanistan it will be Iraq’s turn, where thousands of American troops and other military personnel are still stationed. But you can withdraw in different ways. The nature of the U.S. withdrawal from Afghanistan was the most harmful for its reputation.

The hasty evacuation was the result of American leadership’s ineptitude. This is not at all about Joe Biden’s feebleness. It is about the inadequacy of American ideas about the world surrounding the U.S. For instance, in Afghanistan, according to American plans, their troops should have been safely evacuated by the end of August, while the Afghan army would hold back the Taliban offensive. But the military surrendered most territory to the Islamists with almost no resistance. By mid-August, Americans were already in a country controlled by a new government.

Nothing directly threatened the Americans. The Taliban were interested in the withdrawal of troops and respected the agreement. However, amazed by the speed of the U.S.-backed regime’s collapse, Americans panicked, together with the tens of thousands of Afghan collaborators. Then, people resorted to clinging to the landing gear of departing aircraft — to the bewilderment of the whole world watching the American-style evacuation.

Therefore, despite the work of thousands of intelligence analysts and a trillion dollars spent during 20 years of occupation, U.S. leadership could not correctly assess the situation. It failed to predict how long the regime of Ashraf Ghani would last and could not adequately evaluate the capabilities of the government army and Taliban forces, as well as, most importantly, gauge the mood of the Afghan population. The operation was an absolute failure: Everyone witnessed American incompetence and an inability to objectively assess reality.

That utter American incompetence is precisely the conclusion drawn by the whole world. This evaluation by the international community will have enormous consequences for the U.S., both reputational and, specifically, geopolitical in nature. Of course, the U.S. still has the power — it can organize the evacuation of more than 120,000 people in two weeks. However, it lacks the brains that could have prevented this situation from spiraling out of control. Nevertheless, the saying “all brawn and no brains” is definitely not suitable here. Because the time has come when an irrational force is only capable of creating problems. First of all for itself.

* The group known as Islamic State Khorasan, the Islamic State group’s Afghanistan affiliate and a terrorist organization banned in Russia.