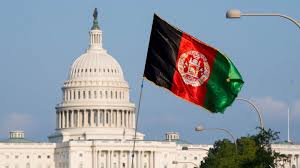 The U.S. has ended the longest war in its history: After 20 years of fighting and occupation, the last U.S. warplanes have taken off from Afghanistan.

The U.S. withdrawal in the middle of the night without anyone watching can be rightly described as a historic defeat. Left behind are the same armed forces that ruled the country 20 years ago, and the tragedy of the vast number of people suffering from the violence.

Where did the war on terrorism, which has spread from Afghanistan to Iraq, claimed as many as 800,000 lives and cost 700 trillion yen (approximately $6.3 trillion), go astray?

The U.S. and the international community must face up to this depressing failure and draw lessons from it.

President Joe Biden has declared that the U.S. presence in Afghanistan is over, and local commanders have stressed that the mission is complete. But the gap between the U.S. government’s message of closure and the still deepening confusion is too great.

It is estimated that tens of thousands of Afghans have cooperated with foreign governments and militaries over the past two decades and are still unable to evacuate. The United Nations predicts that about 500,000 will become refugees by the end of the year.

It is still unclear whether the Islamist Taliban will allow its citizens to evacuate in the future. It is also unclear which countries will accept the citizens who have escaped, and how the human rights of the women and others left behind will be affected.

As the security situation worsens, it is feared that the country will once again become a breeding ground for terrorist organizations.

Biden says, “We can strike terrorists and targets without American boots on the ground,” but if this means aerial bombardment by drones, it is a serious problem.

In Kabul, civilians, including children, are reported to have been killed by U.S. drone strikes this week. Without ground personnel, the risk of a missile strike is even higher.

Nevertheless, the reason for Biden’s hasty withdrawal is probably his conviction that getting out of the “forever war” is in the will of the American people and in the national interest.

It is true that the U.S. cannot be stationed there permanently, but it would be too irresponsible to leave the local people behind in such a civil war.

Gradual US Retreat over the Past 20 Years

In addition, if the U.S. continues to inflict aerial bombardment on the local population, it will further stir up the anti-American sentiment that has become a tailwind for the Taliban.

If you recall that the devastation and hatred of the people of the failed state was the backdrop to the terrorist attacks on the United States 20 years ago, the mission is not complete, but rather abandoned.

We should consider that the misstep began 20 years ago.

After the 9/11 terrorist attacks, the U.S., the single superpower of the post-Cold War era, launched an attack on Afghanistan and toppled the Taliban regime. It also invaded Iraq and brought down the regime of Saddam Hussein.

In both cases, there was a strong belief that by eliminating the enemy with military force, the United States could install the political system it desired. As the U.S. expanded its fronts, it lost momentum in tackling the regional conflicts, poverty and inequality that were the soil for growing terrorism.

While regime change backed by military force did not proceed easily, the U.S. detained terrorist suspects for long periods of time, and there were human rights abuses including torture. In the midst of this chaos, a new extremist organization, Islamic State, was born.

According to Biden, “Our only vital national interest in Afghanistan remains today what it has always been: preventing a terrorist attack on American homeland.” This may demonstrate the limitations that the former superpower faced due to its overconfidence

In the past two decades, the U.S. has been mired in war, while its own national power and prestige have declined due to financial crisis and the Donald Trump phenomenon.

If there is no imminent threat to the U.S. mainland, the U.S. cannot afford to focus on the world. That is probably America’s true intention for pulling out of Afghanistan. The withdrawal is a signal that the era of U.S. power, when the U.S. was able to exercise overwhelming authority in foreign affairs, is completely over.

The stability and reconstruction of Afghanistan will shift from a military focus to a diplomatic coordination effort. The international community as a whole will be entrusted with the task.

The Biden administration reportedly intends to focus its foreign policy on the struggle for supremacy with China and Russia, while China and Russia are moving to secure their own influence by making contacts with the Taliban.

However, it is in the interest of the entire world not to let this region become a breeding ground for terrorism again. The U.S., China and other major countries must hasten the creation of a stable system that includes the Taliban.

In the past, the international community has been involved in the reconstruction of Afghanistan from many angles, but these efforts have been led by the U.S. military. In the future, it will be necessary to launch a new multilateral counterterrorism force at the United Nations or elsewhere to unite in this effort.

Why has the Western-style nation-state not taken root in Afghan tribal society? Why can’t we eradicate extremism? One step toward finding answers to these questions would be to humbly begin a dialogue with local representatives.

Japan, which participated in the U.S.-led war on terrorism and organized the Afghanistan Reconstruction Conference, should take action to build international cooperation to ensure that the 20-year effort does not end in failure.

About Owen 10 Articles
I am currently a university student with a degree in International Affairs and a soon to be degree in Japanese. I enjoy reading books, talking with people, and learning new things.