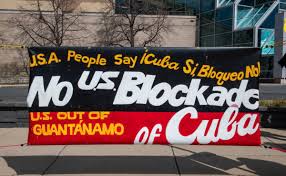 In his speech on the 211th anniversary of the beginning of the Mexican War of Independence, President Andrés Manuel López Obrador called on his U.S. counterpart, Joe Biden, to lift the blockade against Cuba and seek a reconciliation that “lays to rest once and for all the policy of injury” toward the island. Accompanied by his Cuban colleague Miguel Díaz-Canel, the chief executive noted that no state has the right to oppress another, and he invoked the words of George Washington in his sentiment that nations should not take advantage of the misfortunes of other peoples. Likewise, he judges that “it looks bad” to keep on with this “perverse strategy” of precipitating regime change through economic strangulation, since, even if it achieved the desired result, “it would be a despicable triumph, pyrrhic and base; it would be a stain which all great Neptune’s oceans could not wash away.”

One should keep in mind that Obrador’s words do not only represent his personal feelings or the unique position of the Mexican government. They also reflect the sentiment of the international community, as expressed by the 29 instances in which the United Nations General Assembly has condemned by an overwhelming majority the 59-year-old blockade. The relevance of this call is reflected by the fact that barely three months ago, another resolution exhorting Washington to end the illegal and unilateral blockage passed with 184 votes in favor, two against (the U.S. and Israel), and three abstentions (Ukraine, the United Arab Emirates and Colombia).

Besides being in accordance with the global consensus, it should be clear that the president’s sentiments come not from a place of hostility, but undoubtedly from a spirit of collaboration and dialogue that is typical of the Mexican government’s attitude toward its U.S. counterpart. In the context of a respectful and mutually beneficial relationship, the Mexican president is appealing to the sensibilities of the head of a state which, on this topic, finds itself on the wrong side of international law, human rights and ethical principles. Here, Biden’s government is also on the wrong side of the very political current which it represents! One must not forget that former President Barack Obama, in whose administration Biden served as vice president, led a historic shift toward moderating Washington’s hostility toward the island through a process of normalizing relations that was supposed to be irreversible, according to then-Deputy National Security Adviser Ben Rhodes.

It is clear, then, that the posture of the Mexican government is not one of confrontation, but one of searching for solutions to an old grievance, not only for the good of Cuba but also for the good of the United States. As became obvious during the brief loosening, the blockade is immoral, criminal, and to top it all off, counterproductive for the ability of U.S. businesses to conduct trade in Cuba. Therefore, it is fitting to emphasize that Obrador’s discourse appeals to the Cuban American community, which makes up the largest interest group preventing a move toward reconciliation.

One would hope that the White House will interpret this call as an earnest attempt at improving an untenable situation and lift the blockade, as a gesture of goodwill and a desire for positive relations with all parties involved.