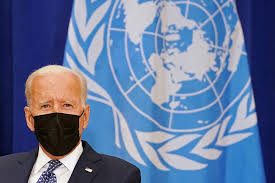 In his first speech at the annual session of the United Nations General Assembly in New York, Joe Biden laid out a vision of the world and America’s place in it that was clearly and fundamentally different from that of his predecessor, Donald Trump.

Biden stressed the importance of democracy as a system that best guarantees human progress, and demonstrates the cardinal importance of alliances and the need for nations to cooperate in solving the world’s problems. Nevertheless, the American president’s foreign policy so far, as commentators have noted with reproach, does not wholly demonstrate any consistency between his U.N. remarks and his actions.

The End of War; Time for Democracy

Biden said the world is “at a pivotal moment in its history,” pointing to the global crises including climate change that threatens to bring catastrophic consequences, the COVID-19 pandemic, income inequality within and between countries, terrorism, the aggressive use of cybertechnology and the regression of democracy in many regions. “This is a critical decade,” he said with alarm. To meet these challenges, countries must work together “as they have never before,” Biden said.

Under his leadership, he continued, the United States has strengthened ties with allies that were strained by Trump’s unilateral policies. “We’re back to talking in international forums,” he said, noting that the U.S. has rejoined the Paris Agreement on climate change and pointing to steps his administration is taking to reduce greenhouse gas emissions. America, he also stressed, is helping poor countries fight hunger, and will allocate $10 billion to that end.

The president also offered an olive branch to America’s enemies. He said the U.S. is “not looking for a new Cold War” and is open to renewing the nuclear deal with Iran. Biden never mentioned China specifically, but his remarks about freedom of navigation, taken to mean navigation in the South China Sea, and mention of human rights leaves no doubt that when Biden referred to the possibility of a cold war, he had a conflict with Beijing in mind. Biden is always careful to avoid aiming harsh rhetoric at China, and describes the country not as an enemy but a “strategic competitor.” “America’s military power must be a tool of last resort,” he declared at the United Nations. Earlier, administration officials indicated that the president’s speech would announce the end of a period of wars and the beginning of a period of diplomacy.*

The US Is Betting on Alliances. Are They Sure?

Biden’s message at the U.N. contrasted with what his predecessor did and especially what his predecessor said. In a way, the president confirmed his position that as a superpower, America again feels responsible in part for the state of the world, distancing himself from Trump’s unilateralism, and confirming that the U.S. values alliances and is ready to cooperate with other countries. It does not see the world as a zero-sum arena where the hegemon must look out only for its own selfish interests, but as a stage where “our success also depends on the success of others.”* He appreciates the importance of democracy and human rights. Also, while Trump, echoing Ronald Reagan’s phraseology, spoke of pursuing “peace through strength” and emphasized U.S. military power, [https://news.un.org/en/story/2020/09/1073002] Biden stressed that “military strength should not be the solution to every problem.”*

However, Biden’s assurances that he would strengthen alliances and cooperation between countries, something he asserted at the Group of Seven summit in June, sound rather hollow in light of his actual behavior. He decided to completely withdraw troops from Afghanistan without consulting other NATO members who also had contingents in the country. The hasty retreat itself, the date of which was set for political purposes so the administration could celebrate ending the war on the 20th anniversary of the 9/11 terrorist attacks, and a conflict in which tens of thousands of Afghans in Afghanistan face retribution for cooperating with the Americans, has undermined America’s credibility as an ally.

Quarrel with France, Omission of Poland

In recent days, there has been an unprecedented row between the U.S. and America’s oldest ally, France, which resents the Biden administration for efforts which led to the cancellation of France’s deal with Australia to supply submarines designed to deter China. The French submarines with traditional propulsion were to be replaced by submarines with quieter nuclear propulsion, making them harder for the Chinese to detect. Containment strategy justified such a change, but it was made behind France’s back without any prior notice or effort to strike a compromise solution that would have allowed France to participate in the deal.

We can see another instance where the U.S. has ignored allies in its treatment of Poland with regard to the controversial Nord Stream 2 gas pipeline. Biden’s team refrained from applying harsher sanctions on its builders, justifying the move by asserting that the pipeline is already a foregone conclusion and additional sanctions would spoil relations between the U.S. and Germany. One might add that sanctions would also spoil relations with Russia, which are already bad, but which Washington clearly fears will get worse. The decision and the way it was implemented has been criticized in the U.S. by diplomats such as Daniel Fried. “At the very least, the matter should have been better consulted on with Poland earlier,” the former ambassador to Warsaw told Polityka.

There are many more examples showing how the Biden administration has not relied on its allies very strongly, including the fact that Biden has maintained protectionist tariffs on trade with European Union countries. In general, according to some commentators in the U.S., Biden’s foreign policy differs from Trump’s mainly in terms of rhetoric, not so much in terms of deeds.

Another example showing how Biden has turned from its allies is the fact that Biden has retained the sanctions on Cuba that were lifted by Barack Obama. That’s because the international policy of the current administration in Washington is driven to a great extent by domestic political considerations. In the case of sanctions on Cuba, it is the fear of exposing the Republican-backed Cuban immigrant lobby in Florida, one of the key electoral states.

As a result, American columnists such as Fareed Zakaria have noted that the principle of “America First,” one of the leading slogans of Trump and his supporters, in some sense still applies to American foreign policy. Under Biden’s presidency, it’s just called something else: “politics for the middle class.”

*Editor’s note: Although accurately translated, these remarks could not be independently verified.