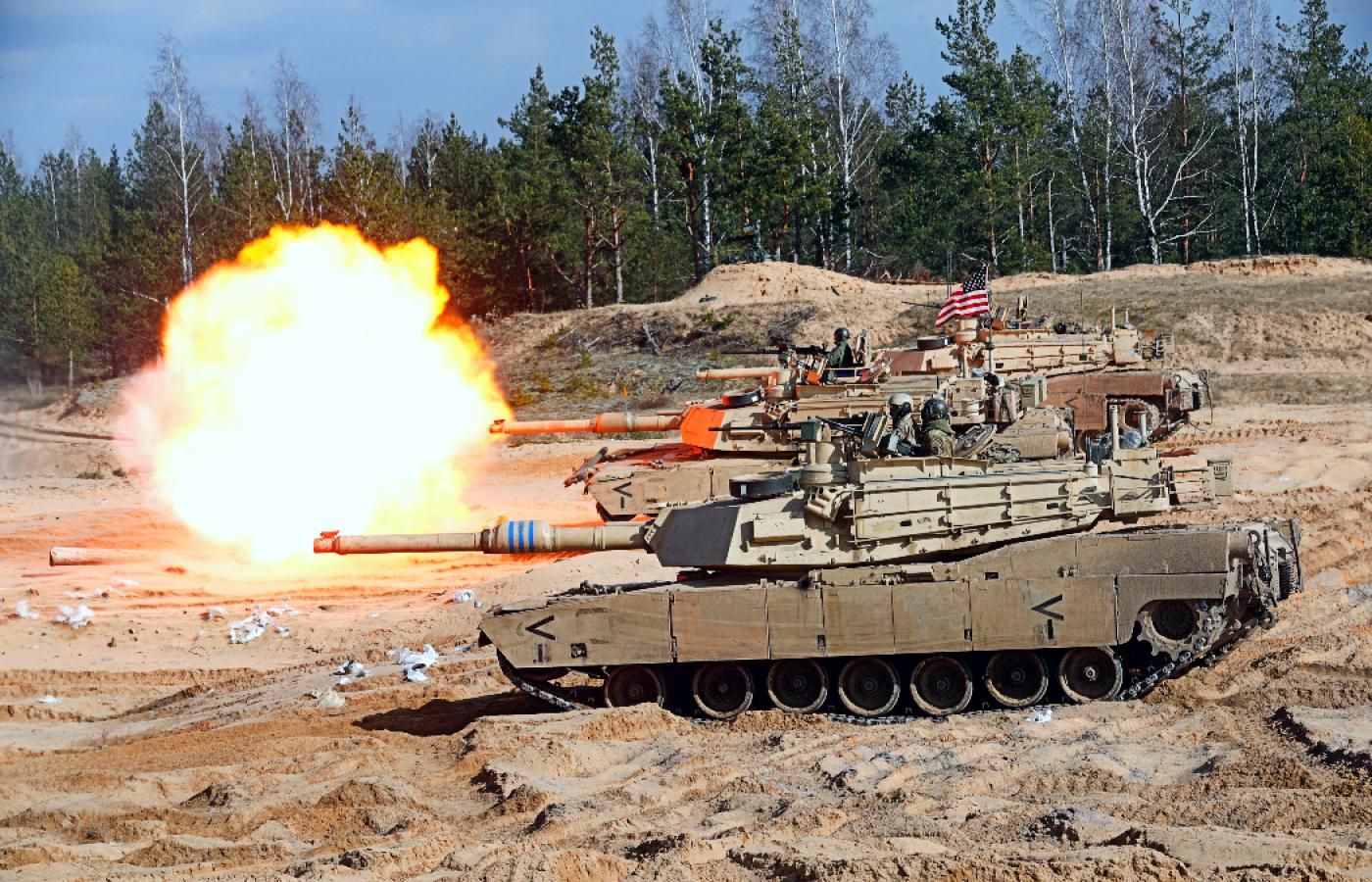 A congressional committee is in favor of selling Abrams tanks to Poland as soon as possible. Congress has not approved this yet, but it is clear that there will be no obstacles to passing the bill. There is, however, a distinct fear that Russia will become increasingly aggressive.

Support for the giant order of 250 Abrams tanks, announced by Poland, was contained in a House of Representatives Armed Services Committee report as part of its work on the 2022 defense budget bill. The bill represents an annual tug-of-war between the majority and minority parties, the White House, Congress and the Pentagon, as well as factions within the party that holds the majority. Political division has meant that, although the U.S. fiscal year began on Oct. 1, neither the National Defense Authorization Act nor the entire federal budget has been passed, and the government is funding itself on a stopgap basis. However, the provision for tanks for Poland is important because the 2022 NDAA is the Biden administration’s first fully authorized defense bill, and sets the course for arms policy not only for next year, but for the rest of Biden’s term.

“The committee applauds Poland’s recent decision to purchase 250 state-of-the-art versions of U.S. Abrams tanks to upgrade the capabilities of its armed forces,” reads a paragraph about the deal with Poland.* It does not refer exclusively to the tanks, but the Abrams equipment is listed as the only specifically named weapon. “The committee requests that the secretary of defense and the director of the Defense Cooperation Agency [responsible for coordinating arms exports] inform the congressional defense committees no later than Dec. 31, 2021, of the procedure and timeline regarding the sale of Abrams tanks to Poland,” the committee added.* The committee set a not-too-distant deadline by which it seeks a response from the Pentagon on the details of the announced contract.

This is a positive situation. With the Polish Defense Ministry’s unique approach to public information from Congress and U.S. offices, the Polish public can learn much more from the U.S. than from their domestic counterparts. “The commission encourages the administration to move forward with the aforementioned sale as quickly as possible,” the U.S. committee concluded.*

The House of Representatives and the Senate are in Democratic hands. While there are occasional sparks between the White House and Congress, support for strengthening NATO and allied defense capabilities through arms sales is not controversial.

The Russian Context of the Contract with Poland

The Abrams sale is viewed in Congress as a transaction between allies, the entire eastern flank of NATO. The committee emphasized its priority was to deter Russia and strengthen allies exposed to its hostile actions. The committee cited long-standing examples of Russian aggression: the illegal occupation of Crimea, the occupation of Donbass, military intimidation of Ukraine and hostile action in the Black Sea. For the first time, however, the committee also pointed clearly to the military integration of Belarus and Russia, which has resulted in the buildup of forces on Poland’s borders.

The purchase of 250 tanks is supposed to increase the alliance’s ability to deter Russia, and Poland’s defense potential is crucial for Washington in accomplishing this task. The committee has straightforwardly called our country its strongest U.S. ally, which, in accordance with the declaration made at the NATO summit in Wales, spends more than 2% of its gross domestic product on the military and more than 20% on updating equipment. (In fact, these ratios are much higher — 2.3% and 30%.) The committee appreciates the modernization efforts (which should come as no surprise since most of the large arms packages purchased by the Ministry of Defense are “made in the U.S.A.”), but also the growing ability to cooperate with U.S. ground forces and air force units deployed in Poland on a rotational or cyclical basis. The appearance of Abrams tanks, the next defense system linking Poland with the U.S. after F-16s, F-35s, Patriot missiles and high mobility artillery rocket systems, will expand and strengthen that cooperation, which is extremely beneficial from Washington’s perspective.

The House Armed Services Committee goes further and has demanded that the U.S. not only sell its equipment to allies on the eastern flank, but that it significantly and permanently increase its military presence in Europe. The committee — not for the first time in recent years — points to the benefits of permanent military deployment in regions where the risk of conflict is high, and the ability to deter at a distance may not be enough. That is why, in its proposals for the defense bill, the committee has included a whole litany of demands for the establishment of new permanent bases in NATO’s eastern region, from which troops could respond more quickly and decisively, would be cheaper to maintain than the current model of rotational redeployment of equipment, and whose operation would not be subject to the pattern of training, mission and rest that reduces the number of available forces by threefold.

In the context of bases, Poland comes up again, along with Romania and the Baltic states, as a place where additional American troops in permanent outposts would be useful. The committee has even requested a special report from the Pentagon on the possibilities, benefits and costs of such a relocation, which would be ready in the spring.

Keep in mind, however, that for now, this is a committee bill that does not yet have the support of the full House. Several years ago, the Pentagon ignored a call to analyze permanently stationing a brigade of ground troops in Poland, and instead sent troops on a rotating basis. Despite calls from Congress, the Defense Department is conducting a review of U.S. troops around the world, prioritizing NATO’s eastern flank. It is unheard of for U.S. to reduce the number of troops here. On the contrary, last week the Pentagon announced additional support for countries in eastern Europe by sending military advisers from the 4th Security Forces Support Brigade, a formation that helps achieve interoperability and alignment among new allies. But the Defense Department operates at the behest of the White House, not Congress, and the issue of permanent bases and troop deployments in an era of global competition is one of the more contentious issues in U.S. defense policy. Joe Biden is unlikely to want to build new bases.

The committee has noted the lack of logic in one of the U.S. Army’s key decisions in recent years, a decision closely tied to the eastern flank of NATO and Poland. The 5th Marine Corps, whose forward command post was located in Poznan, Poland, and where Polish Gen. Adam Joks took over as deputy commander, is permanently stationed at Fort Knox, Kentucky, although it is supposed to be dedicated to defending Europe against Russian aggression. The committee is unhappy with this hybrid, rotational concept, and has asked the Pentagon about the potential negative effects of physically moving headquarters away from the theater of operations. How will it affect the speed of response? What about the time difference? Doesn’t Russia have an easier task now?

The committee is demanding a clear strategy, and the subtext suggests that it would most like to see a garrison with headquarters permanently in Europe. However, even placing the command closer to the area of responsibility will not solve the problem of the alarming movement of the corps’ subordinate forces (tens of thousands of troops). During the recent V Corps certification exercises in Germany, the “command” of subordinate tactical units took place virtually. In a real war, or even in the crisis phase preceding it, divisions and brigades would have to be in place for deployment. Their redeployment takes weeks, often months in peacetime, not to mention the difficulties that an active enemy would inflict on the entire process.

Over the past two years, the redeployment of troops and equipment to Europe has been rehearsed in a series of engagements under the collective name “Defender Europe.” The first exercise in 2020, severely curtailed by the pandemic, focused on the Baltic. The next exercise in 2021 refocused on the Black Sea and the Balkans. Giant roll-on/roll off ships called at the ports, discharging tanks and helicopters “assembled” for transport. Paratroopers from the rapid reaction forces in the U.S. landed in whole battalions onto training grounds.

“Defender Europe” was the kind of long-awaited “large-scale exercise” that NATO is only able to organize every few years, but which America wants to conduct annually. The committee noticed that in the 2022 budget, the Defender operation disappeared. “The committee notes that the Department of Defense canceled the large-scale exercise Defender Europe during a period of heightened aggressive Russian military activity and replaced it with smaller-scale exercises. … The committee is concerned that a modification to the scale of the Defender exercises planned several years ago was not disclosed to Congress until the FY 2022 budget proposal was submitted.”*

As you can see, the lack of communication between the Defense Department and Congress is not exclusive to Poland. Representatives on Capitol Hill have stronger ways of exerting pressure, intervention and control. For starters, they have demanded that the Pentagon provide explanations and a strategy for limiting the impact of the downsized Defender program on defense readiness, interaction with allies and deterring Russia. It is so far unclear from U.S. Army and department statements what will happen with “Defender Europe” next year. The U.S. ground forces assure us that maneuvers will take place in some form, with the V Corps playing a major role. Even if the sale of the Abrams tanks reach record amounts, such tanks in Polish colors are unlikely to make it to next year’s exercise, although we can be sure that the Ministry of Defense will do everything it can to make the American vehicles look like ours.