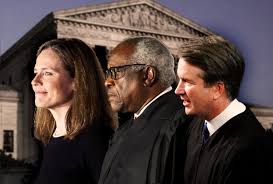 Guns and abortion. The Supreme Court’s agenda this month is filled with major political and cultural issues. And while Congress stalls, the wheels of the country’s highest judicial authority are spinning smoothly; subjects that the Supreme Court once preferred to avoid it is now welcoming with open arms.

It is plain to see the impact here of Donald Trump’s main legacy: three nominations which created a court that consists primarily of justices who see it as their job to ensure America lives according to the original thinking in the Constitution, the kind of thinking that the Founding Fathers had in mind.

Take the right to bear arms referred to in the Second Amendment.* Conservatives interpret this right very broadly. They believe that absolutely every restriction on any kind of gun or weapon is unconstitutional. Their opponents point to the clause that the right to bear arms applies in the context of “a well-regulated militia” and thus, is not an individual right.

The last time the U.S. Supreme Court considered a case that examined these different interpretations of the Second Amendment was in 2010. But today, the New York State Rifle and Pistol Association is going to Washington to argue that a mandatory permit for a firearm violates a citizen’s fundamental rights. This gun club has been knocking on the Supreme Court’s door for some time, but it has only opened with the recent appointment of Justice Amy Coney Barrett in October 2020. It is uncertain how the court will rule, but the fact that the case will be heard suggests there are justices who are receptive to the complaints of a gun-loving New York.

Moreover, it appears that the newest justices hope to make a strong mark in the U.S. on precisely the issues that divide Americans. By taking the case, the court has committed itself to making a decision that the entire country will be subject to. Should the New York State Rifle and Pistol Association prevail, the restrictions on the use of firearms in other states will quickly disappear.

Coney Barrett warned her colleagues that they must remain hypervigilant to prevent their own prejudices from influencing their decisions. But any discussion about how much the court is influenced by politics goes a step further and involves the decision of which cases the Supreme Court will and won’t hear.

This political dynamic also colors the abortion debate. When Texas abortion rights activists protested the state’s new and extremely restrictive law on abortion, the conservate justices ruled that the Supreme Court could not decide the issue. Thus, the Texas ban on assisting with an abortion after six weeks remains in place. On the other hand, on Dec. 1, the Supreme Court will hear arguments regarding a Mississippi law that bars most abortions after 15 weeks. In short: Those who wish to ban abortion get a seat at the table, those who want to protect the right to abortion do not.

Even more so than with the firearms case, the Supreme Court has a chance to change the law in America permanently, especially if a majority of the court rules in Mississippi’s favor. To date, 11 other states have prepared “trigger legislation” that would immediately ban abortions after the 15 weeks.

Mississippi’s choice of language is deliberately aligned with the original intent philosophy of the conservative justices on the court. In short, this legal philosophy ignores changing practices and progressive thinking, and is based solely on what the justices believe the authors of the Constitution had in mind. Mississippi claims that the right to abortion has no basis in history or tradition. In other words, the only law that can exist is the law America recognized when it was founded. This would give Amy Coney Barrett leeway to take abortion off the table and claim the case is not politically motivated. After all, she can’t help the fact that the right to abortion was never written into the Constitution.

At the same time as the Supreme Court is getting ready to rule, President Joe Biden has initiated a broad examination into changing the court. There are those within the Democratic Party who would like to increase the number of Supreme Court justices and set term limits on the seats that are now lifetime appointments.

Early signs indicate that the committee looking into these reforms will not propose any drastic changes—at least not before 2025. This fits Biden’s philosophy of seeking change within existing frameworks rather than changing those frameworks themselves. It will do the Republicans good. The current trajectory of the Supreme Court and the permanent stalemate in Washington mean progress for conservative America.