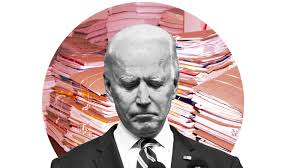 What kind of state will Joe Biden be in when he arrives at the crucial COP26 summit on climate change that opens Sunday in Glasgow, Scotland? The sorry state of a president handcuffed by a dysfunctional American democracy. It is not the narrow success of his presidency playing out around the passage of his social and environmental spending plan known as Build Back Better. Far from it. Weighing quite heavily in the balance are the consequences of setbacks in the deepening inequalities in the United States, and the worldwide urgency that global warming presents.

“We have to prove democracy still works. That our government still works, and we can deliver for our people,” Biden said during his first presidential address to Congress in April.

Things have gotten off to a bad start.

There was hope that, leaning on his (slim) majorities in the Senate and House of Representatives, Biden could at least restore a certain state of health to political life despite the ultra-partisan opposition from Republicans and the procedural wrangling impeding the work of Congress. But the Democrats, a majority of whom nevertheless support the “transformational” will shown by the president, are displaying the spectacle of a party taken hostage by two of its senators, Joe Manchin of West Virginia and Kyrsten Sinema of Arizona, and not without demoralizing a segment of Democratic voters. The election barometer in the race for governor in Virginia next Tuesday will be the measure.

This begs the question: With majorities at risk of being lost in the midterm elections of 2022, will the Democrats avoid shooting themselves in the foot?

There are setbacks already. And the bipartisan accord around BBB’s component on the all-out rebuilding of the nation’s infrastructure (roads, bridges, drinking water, etc.) will not hide those setbacks. Regarding the other big component of the plan, which is also the boldest (expanding the social safety net and fighting climate change), it is already understood that the broad reformative and redistributive ambitions promoted by a newly progressive Biden will be considerably diminished, which is to say, reduced by half. Key commitments, like paid parental and medical leave, lower prescription drug prices, etc., are all down the drain; other commitments, notably in education, have been trimmed. Still, at $1.75 trillion over 10 years, the reform effort remains significant, if not sufficient.

Biden would not necessarily have these issues if the Democratic majority in the Senate were a bit more solid. The convulsion among the Democrats is less the result of a confrontation between progressives and moderates within the party than the self-serving obstruction of Manchin and Sinema, who find themselves serving the interests of Republicans who would like nothing better than to watch the Democrats tear each other apart. Both of them side with the right in their resistance, in principle, to the idea of raising taxes on big business and on the super-rich to fund at least a portion of the reforms, which leaves Biden facing a characteristic equation of American capitalist culture made even more difficult to solve in the context of a precarious economic recovery and a pandemic crisis hyperpoliticized by Republicans.

Not content to confuse social programs with philanthropy instead of seeing in them tools for collective progress and diminished inequality, Manchin is also one of the loudest opponents of measures advanced by the White House to accelerate energy transition with support from a majority of the Democratic caucus. He succeeded in opposing the most important environmental measure proposed by the president, a $150 million program to ultimately replace gas and coal-powered plants with solar and wind-powered systems.

It all makes sense. A conservative Democrat in a state that voted for Donald Trump in 2016 and 2020, Manchin is, for his constituents, a Trojan horse who defends the state’s coal industry. No matter that coal, oil and gas usage is the main source of carbon dioxide emissions worldwide, and that the United States, after China, is the leading emitter of carbon dioxide.

The new version of the spending plan does nothing to lessen dissent among the Democrats. The left wing of the party is rightly mad. Bound for a Group of 20 summit of leading rich and developing nations on Thursday in Rome, then on to Glasgow on Sunday, the president has tried to put on a brave face by congratulating himself for reaching a “compromise” of “historic” proportions. Which leaves one doubtful, as he had deemed it essential from the start to do much more.

About Reg Moss 43 Articles
Reg is a writer, teacher and translator with an interest in social issues especially as pertains to education and matters of race, class, gender, immigrant status, etc. He is currently based in Chicago.