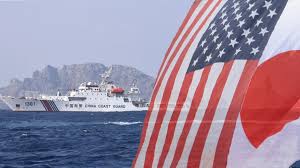 How do you deal with China as it moves to strengthen an economic and military hegemony? This is the biggest issue regarding national security in Japan right now.

Since the beginning of the Biden administration, tension between the U.S. and China has become one democracy vs. tyranny. How Japan will handle the shifting situation between these two countries from the geographic and political position it occupies between them will be an important issue during the upcoming Diet election.

The United States will create a blockade around China with Japa, among other countries. In September, the Quadrilateral Security Dialogue, a cooperative framework of cooperating nations including Japan, the U.S., Australia and India, held its first direct meeting. The United States, the United Kingdom and Australia have also formed a three-nation national security group called AUKUS.

It was further confirmed that the United States is obligated to defend Okinawa and the Senkaku Islands under the U.S.-Japan Security Treaty.

The Liberal Democratic Party, Komeito, and the Constitutional Democratic Party of Japan surely each based their values on the U.S.-Japanese alliance. What they have in common is that they are resolutely opposed to China, which is not backing down from the authoritarian position it has taken.

However, if the alliance with the United States advances in terms of security, there is a risk of getting involved in the U.S.-China conflict.

Although the LDP, including Prime Minister Kishida Fumio, seeks unity with democratic nations such as the United States, it also seeks to avoid direct conflict with China, a country with which Japan has deep economic ties.

What position Japan should take with respect to the United States and China is sure to be an issue regardless of which political party takes power. We must develop a new diplomatic strategy.

If we enhance our defense capabilities in anticipation of a possible emergency in the Taiwan Strait, this could increase the tension between Japan and China.

Japan’s defense spending has increased every year since 2013. Budget requests for the 2022 fiscal year are the largest ever and exceed 5.4 trillion yen (approximately $47 billion).

As North Korea conducts repeated nuclear missile testing, the state of Japan’s missile defense system is becoming a focal point. The LDP considers “the ability to attack an enemy’s base” to be “one of the options.”

On the other hand, the Komeito Party, which will form a coalition with the LDP, considers this a difficult option. The CDPJ insists on “careful analysis,” which the Communist Party absolutely opposes. The Japan Innovation Party is advocating for defense technology, while the Democratic Party for the People argues for conducting a realistic discussion within the scope of Japan’s constitution.

The question of whether to employ such defensive technology is a problem that may deviate from the principle of “nonaggressive defense” as stipulated in the constitution, and would significantly change the current security policy.

As for relations with the United States, the relocation of Futenma Air Station in Okinawa from Ginowan to Henoko is a point of contention between the ruling and opposition parties.

In a prefectural vote two years ago, more than 70% of Okinawan citizens opposed the relocation. Although the seabed around Henoko was found to be softer than expected prolonging construction and delaying the relocation, the LDP says that relocation is “progressing steadily,” something the Komeito Party agrees with.

Opposition parties, including the CDPJ and the Communist Party, agree that the efforts should be suspended, but I believe Japan should discuss specific alternatives.

Each party should also clearly demonstrate its plans for the future regarding measures to reduce the burden of military concentration on Okinawa.