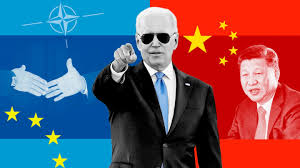 EU, NATO, AUKUS, Quad, ASEAN — it’s as if Joe Biden were using alphabet soup to assemble a coalition. The president of the United States is making a serious effort to use existing alliances and create new ones to protect democracy and halt an autocratic and communist China. However, to a certain extent, these parallel efforts weaken each other.

Certain member states of the Association of Southeast Asian Nations are concerned that the United States and Australia established a strategic forum (the Quadrilateral Security Dialogue) with India and Japan and a three-member alliance (AUKUS) with the United Kingdom. ASEAN members fear these steps will lead to an arms race and turn the region into a superpower buffer zone. Biden tried to dispel concern during the ASEAN virtual summit, which ended on Thursday.

The American president has since tried to explain himself in Europe, which also disapproved of AUKUS, in part because of the broken French submarine contract. Washington chose a very bad time to anger Paris; given Angela Merkel’s departure, France could become the continent’s deciding force. Biden spoke with Emmanuel Macron yesterday about the situation, although he will have to do more to reestablish trust.

The creation of AUKUS not only disappointed European leaders because it cost a few billion euros, but also because they were envious. AUKUS showed that the geopolitical focus has shifted to Southeast Asia, and that trans-Atlantic relations — relations that Donald Trump weakened — may never be as strong again. As a result, during the Group of 20 summit in Rome starting today, Biden must reassure European powers that he continues to regard NATO as his topmost alliance. Otherwise, he can hardly expect Europe to act as America’s dedicated partner in pushing back China.