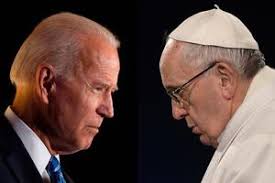 A diplomatic meeting turns into a theological-sacramental controversy.

President Joe Biden held an unusually long meeting with Pope Francis on Oct. 29. According to the Vatican, they discussed their common commitment to protecting and caring for the planet, the fight against the COVID-19 pandemic and the issue of aiding refugees and immigrants.

They also touched on protecting human rights, including the right to freedom of religion and freedom of thought. The meeting also facilitated discussion about internationally relevant issues with respect to the Group of 20 summit of leading rich and developing nations, and encouraging world peace through diplomacy.

A few hours later, Reuters journalists asked Biden whether he had discussed the subject of abortion with the pope. In response, Biden said that “No it didn’t. It came up — we just talked about the fact he was happy that I was a good Catholic and I should keep receiving communion.”

Immediately, a number of Catholic and non-Catholic media outlets in the United States, Europe and Latin America harshly criticized the president for his support of abortion, and were suspicious about what they called the pope’s permissiveness.

The teachings of the Roman Catholic Church surrounding the crime represented by abortion do not only originate in the revealed truth, but also in the abundant scientific literature that shows a human organism is a true living being from the moment of conception.

Therefore, deliberately taking the life of a human being — whatever its state of development — is considered a serious sin and a crime. Biden has confirmed that he is not in favor of abortion, but that, as a civil servant, he is obligated to act in accordance with current law and public policy. Accordingly, from an international jurisdiction perspective, he does not conform to the teachings of the Church on this delicate subject.

However, moral decisions about such mortal sin require knowing oneself deep down: having full knowledge, providing deliberate consent and understanding the gravity of the subject. It is in the space of individual confession and/or spiritual direction that one develops an internal dialogue. One can occasionally discover mitigating factors there that eventually allows one to approach the Eucharist if there is remorse, even when the legal circumstances remain the same. In a word, understanding the gravity of the matter is not enough to define mortal sin. Instead, one has to satisfy all three elements that every child learns in catechism.

It is the exclusive authority of the confessor to grant absolution and define how the penitent may have access to the Eucharist and avoid scandal. Thus, just like anyone, Biden deserves to be understood in light of the integral teachings of the Church, not from some fragmented portions of such teachings that are, in part, ideological. Observers must not comment in a way that invades strictly personal judgments.

About Amy Bathurst 7 Articles
I am a native English speaker from the UK, with a Bachelor's degree in Modern Languages. I absolutely love learning foreign languages and discovering the differences between them. My favorite languages are romance languages, specifically Spanish and Italian. In my free time, I love reading, baking and drawing.