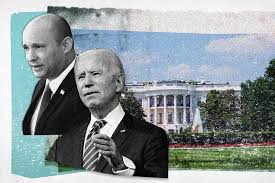 Despite pressure on Israel by Joe Biden’s administration to reopen the U.S. Consulate in occupied Jerusalem to serve Palestinian citizens, the enemy government still insists on rejecting the move. This comes at a time when the U.S. is looking to take a symbolic step toward improving its relationship with the Palestinians after the breakdown of relations during Donald Trump’s administration, whose “Deal of the Century” left Palestinians out in the cold.

The Israelis see an opportunity to challenge the Biden administration and get away with it because this administration is too busy tackling more important problems. Furthermore, the Israelis don’t want President Biden to undo everything Trump gave them, but instead, they want to take advantage of the gains they have made.

The Consulate in Jerusalem

But the problem runs deep below the surface, since the Biden administration is not so much interested in serving Palestinian citizens as it is concerned that the U.S. appears to be a bumbling fool. The issue of reopening the consulate is one of the few remaining tools the U.S. can use to exert pressure on Israel, a tool it can use whenever it wants. The relationship between the U.S. and Israel has experienced a period of great tension since Biden took office and reversed the “open instrument” approach that President Trump took.

But since removing Benjamin Netanyahu’s government, Washington has succeeded in controlling the actions of Naftali Bennett ‘s administration on more than one issue. For example, it has stopped the Israelis from interfering in and disrupting the U.S. position on the Iranian nuclear deal, prevented Israel from provoking disputes with Egypt and Jordan, and forced Tel Aviv to cancel vital projects with China, including leasing the Haifa port, establishing a seawater desalination plant, and, possibly, putting an end to leaking U.S. scientific secrets to China.

Israel has quickly realized that the Biden administration is seeking to marginalize it regionally and distance it from any future agreements. This is because Israel still refuses to settle the Palestinian issue with a two-state solution and continues to annex and expand settlements, while then insisting that it will not share details of its relations with China and Russia with Washington. The Biden administration views these matters as provocations that negatively affect the status and future of Israel and its security, making it difficult for the U.S. to consistently offer international diplomatic cover, whether at the United Nations or the International Criminal Court in The Hague.

The euphoria Israel experienced during the Trump era caused its leaders to lose the ability to absorb changes on the international scene and allowed it to refuse to recognize a new reality that excludes them from any regional arrangements, despite the illusory state of normalization. Washington is seeking to redraw its alliances in the Middle East, something the Israelis cannot understand or believe. America’s strategic goal is to reduce Israeli influence and weaken it internationally in an effort to end Israel’s dream of expansion in the long run. However, there is a long history of Israel’s disregard for changes in the international order. President Dwight D. Eisenhower forced the government of David Ben-Gurion, under threat, to withdraw from the Sinai Peninsula after it occupied the Sinai during the tripartite act of aggression against Egypt in 1956. Furthermore, President Jimmy Carter forced Menachem Begin to sign the Camp David Accords in 1979 notwithstanding Begin’s disapproval. This led to Israel’s complete withdrawal from the Sinai Peninsula in 1982 and the dismantling of its settlements, which astonished and frustrated Begin until he died.

The Bottom Line: Zionism and an Ungrateful Ally

Despite the fact that the U.S. is Israel’s lifeblood, Israeli politicians continue to take a stand against American interests in the region and evade Washington’s plan for a two-state solution, which is what ultimately led to the breakdown of negotiations on the issue of settlements in 2014. This placed Israel in a quandary with the Obama administration, and this tension subsequently shifted to the Biden administration. Israel is biting the American hand that feeds and protects it. Its lack of gratitude is an attribute of its Zionist mentality and deviant thinking. Accordingly, it seems that the day will soon come when Israel finds it has been abandoned even by those who created it out of Palestine.

The author is a Jordanian journalist.