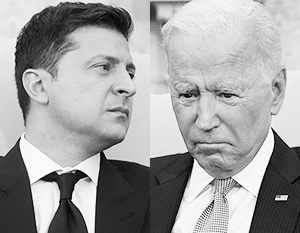 There are growing signs that the U.S. is preparing a new escalation around Russian borders. In conjunction with American ships entering the Black Sea, Russian Minister of Defense Sergey Shoigu has warned that any type of provocation is possible. However, political analysts claim that an escalation in Ukraine would not be advantageous for President Joe Biden. Who is forcing Biden to stir up relations with Russia, and how?

The U.S. has kept itself in check for almost half a year. Since Russian President Vladimir Putin met with Biden in June in Geneva, Washington has refrained from serious military and political provocation involving Russia — that is, Washington has been fulfilling its end of the deal to end further escalation of bilateral relations.

It appears that Washington’s restraint has come to an end as November begins. In the midst of Ukrainian military provocations in the Donbass region, two U.S. Navy ships entered the Black Sea, including USS Mount Whitney, the flagship and command ship of the U.S. 6th Fleet, whose presence sends meaningful military and political signals to the Ukrainian regime.

On the Front Lines

Moscow has already interpreted this deployment as a test of the country’s defense capabilities. “Such tactics are well understood. When a foreign ship carrying high-precision long-range weapons enters the Black Sea on a nontourist voyage, naturally, its actions are watched and followed. We understand that any type of provocation is possible at any time, as has recently happened with a British warship. And of course, we should not allow such things to occur,” Shoigu said.

Experts agree with Shoigu that the presence of American ships increases the possibility of a military clash between the two countries.

“Reinforcement of American presence in the Black Sea does not contribute to strengthening security. Even though it is temporary, military presence of the U.S. and NATO countries in the most conflict-prone region in Europe is increasing. This is the most volatile region, where military conflicts occur. It is a front-line region between the Russian Federation and NATO, where Russian-Western rivalry is most intense. The possibility of an unintended military conflict between Russia and NATO, which may result from a provocation or an accidental tragic mistake, is increasing,” explained Dmitry Suslov, the deputy director of the Center for Comprehensive European and International Studies at the National Research University–Higher School of Economics.

In other words, if USS Mount Whitney decides to behave like the British battleship Defender and blatantly violates Russia’s territorial waters in the Crimea region, then Moscow may respond with force. Deputy Foreign Minister of the Russian Federation Sergey Ryabkov has previously said, “We have the ability to strike, and we can strike, but whether or not we will strike — this is a separate issue, a matter of political choice.”

Then why is Washington taking such a risk? Why force Russia to make a choice? This is likely a political matter for the U.S. The Biden administration is genuinely attempting to deescalate tension in its relations with Moscow, not because of its love for Russia, but because it understands that a secondary conflict with Moscow does not allow the U.S. to focus on enemy No. 1: Beijing.

However, not everyone in Washington understands Biden’s logic. Members of both houses of Congress regularly demand that the White House convey the willingness to defend its Ukrainian ally from nearly inevitable Russian aggression. “With the recent massing of Russian forces on the Ukrainian border, we urge your administration to take immediate and swift action to provide support to Ukraine in the form of intelligence and weapons,” Reps. Mike Rogers and Mike Turner demanded, ranking Republicans on the House Armed Services Committee. “Your administration cannot ignore Russia’s continued threat to international law and Ukraine’s territorial sovereignty … Additionally, we urge you to immediately consider an appropriate U.S. military presence and posture in the region … to prevent the situation from escalating further.”

First, It’s not only Republicans who feel this way, but also some members of Biden’s Democratic Party. Second, Biden, whose popularity ratings have dropped dramatically in recent months, does not want the press to think about him as the heir to former President Donald Trump’s role as the “Russian spy in the White House.”

Russia doesn’t need this kind of situation, either. It is clear that if Biden is bullied for being pro-Russian, then he will be forced to prove the opposite by engaging in anti-Russian provocation. Additionally, any type of agreement that may be achieved during ongoing Russian-American negotiations will be extremely difficult for Biden to sell to the American public.

Therefore, experts assessing America’s political goals in relation to U.S. ships entering the Black Sea are pushing for discussions not so much about American aggression, but about America’s attempt to play both sides, walking the fine line between Russophobia on Capitol Hill and America’s national interests.

“The reason for strengthening America’s presence in the Black Sea is twofold. First, it is an alternative for Ukraine’s integration and entry into NATO. The U.S. understands that Russia will draw a red line at this, and as such, is increasing military cooperation with Ukraine. At the same time, Ukraine is not allowed to join NATO or provided with any security guarantees, as Article 5 of the North Atlantic Treaty does not apply to Ukraine. Second, the U.S. is creating uncertainty for Russia by increasing its presence in the region, and thinks this is useful in deterring Russia from making moves on Ukraine. The U.S. is creating an incomprehensible situation — will it fight for Ukraine in the event of a full-scale Russian-Ukrainian war or not? The lack of clarity creates a deterring effect,” Suslov says.

This Is No Place for Children

If this game were being played between Moscow and Washington, there would be no issue. Russia understands the rules and would play along with the U.S., if Americans also played by the rules and respected the red lines. For example, if American ships were to demonstrate their presence, enter Georgian ports, visit Odessa, but refrain from entering Russian territorial waters in the Crimea region and then, 21 days after entry, were to leave the waters pursuant to the Montreux Convention, Moscow, in return, would flex its muscles and identify its interests in the region, demonstrating it is unconditionally and unambiguously prepared to use military force in the event of a provocation.

However, the issue arises when this game between two experienced players is joined by an amateur third party who does not hold even a portion of superpower responsibility; namely, Ukraine, which is currently aggravating the situation in the Donbass region contrary to American interests and demands.

“From one perspective, current aggravation of the situation in Ukraine is a result of internal political issues in President Volodymyr Zelenskiy’s administration, which is trying to compensate for these issues by complicating its foreign policy game and confrontation with Russia. From another perspective, it is due to Kyiv’s dissatisfaction with the Biden administration’s actions regarding the Ukrainian conflict. Actions which are aimed at stabilizing confrontation with Russia and preventing a full-scale escalation of the conflict in the Donbass region,” Suslov recalled.

In recent months, the U.S. has repeatedly sent warnings to Kyiv, which Zelenskiy has ignored. He even went so far as to order the kidnapping of an observer from the Luhansk People’s Republic at the same time that a high-ranking State Department official, Undersecretary of State for Political Affairs Victoria Nuland, was visiting Moscow. Zelenskiy’s logic is clear; going against the White House is scary, but the Ukrainian president has no other choice. In its current state, Ukraine’s regime can only exist against the backdrop of the conflict between Russia and the West and the absence of any agreement between them regarding Ukraine. As soon as an agreement is reached, Ukraine’s regime will be replaced with a regime that is more appropriate and less distracting for the U.S.

This is precisely why Kyiv is interested not only in provoking a war in the Donbass region, but in involving the U.S. in it. In this regard, the presence of NATO ships provides Ukraine with additional opportunities, including organizing some kind of related provocation.

Washington, of course, understands this game and realizes that Moscow is not interested.

“At a time when the Biden administration is trying to concentrate its resources, forces and attention on China, a new escalation in Ukraine has absolutely no benefit for the U.S. It is equally of no benefit to Russia, as an escalation in Ukraine will greatly amplify the Russian-Western confrontation, reduce Moscow’s freedom in foreign policy maneuvers and lead to more sanctions, which are currently not getting better. Ukrainian leadership will be the only beneficiary. Ukraine has no other way to strengthen its identity, gain attention and resolve internal issues, including economic ones,” assures Suslov.

Nevertheless, to avoid any unpleasant confrontation, Biden remains unable to assert that the U.S. is satisfied with Ukraine. The U.S. has essentially become a victim of its own rhetoric and policy, and hostage to Ukraine’s regime, which has its own motives. This is precisely why U.S. activity in the Black Sea carries such high risk.

About Svet Voskoboinik 16 Articles
Svet Voskoboinik grew up speaking Russian, Latvian and English in Riga, Latvia. Svet earned a BA in Linguistics with a minor in Applied Language Studies from the University of California, Berkeley and an MA in Translation Studies from the University of Birmingham in the UK, in addition to a degree in Baking and Pastry Arts from the California Culinary Academy. Svet currently speaks Russian, English and Spanish, and has extensive experience working in hospitality and finance. Based in Los Angeles, CA, Svet enjoys cycling, sailing, learning languages, writing, travel, and cooking with friends.