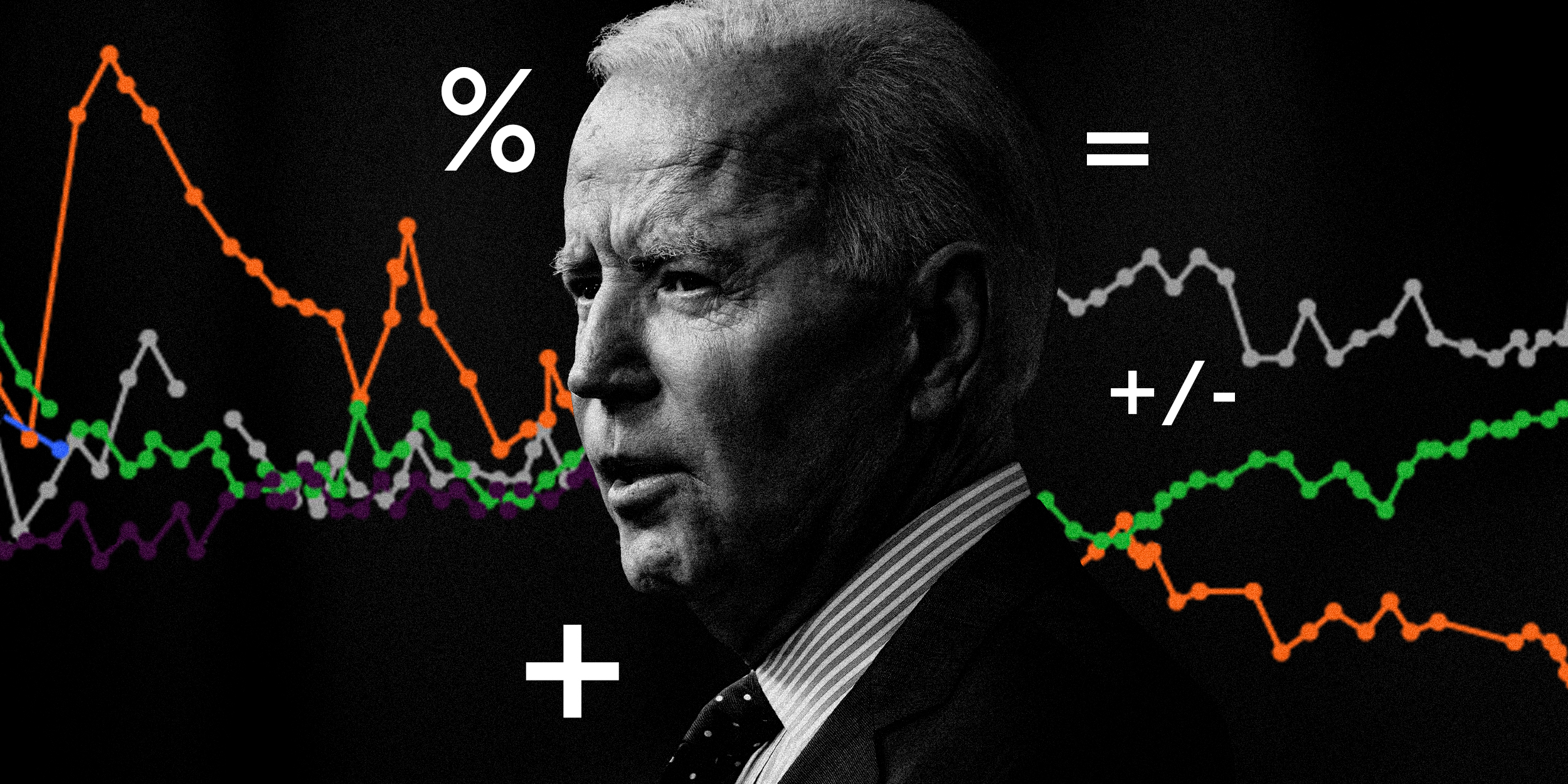 Recent opinion polls in the United States have just confirmed that the politically sensitive period for the Biden administration is continuing. The decline in the president’s approval rating, which began over the summer, is still not over.

The recent polls’ results, jointly conducted by The Washington Post and ABC, are quite striking. President Joe Biden’s approval rating is at its lowest level (so far), 41%. The other indicators of trust in him are just as worrisome.

The critical challenges for the White House turned out to be the economy, combating COVID-19 and party-political quarrels — both disputes with opponents, Trumpists and others in the Republican Party, and struggles within his own Democratic Party.

Until recently, none of these areas seemed to portend a threat to Biden.

There seemed to be a long honeymoon period ahead, with voters ready to forgive the president’s missteps and believe that the results of his efforts would soon be tangible. However, this period passed very quickly.

Today, analysts are already pointing out that the White House underestimated the magnitude of the challenges facing the country and Americans’ negative responses, and therefore failed to properly prepare, and were caught unawares.

The White House has changed its strategy. Crisis management mode is now underway, but there is no reason to hope for a rapid improvement in Biden’s approval rating.

The Economy Is in the Doldrums

For most of this year, the economy seemed to be recovering from a very tough 2020. Statistics showed that a lot of new jobs were created.

However, suddenly there was a slowdown.

For several months running, the rate of job creation has been dropping: The impact of COVID-19 will echo in the economy for a long time to come. But in October, everything changed again: Job creation indexes were very high — 530,000 new jobs. Obviously, there will not be a linear economic recovery, but fluctuations, ups and downs.

That is, the situation is far from the stability that was expected.

In addition to these problems, noticeable inflation emerged, above all a sharp rise in fuel prices. And while the cause of this in the U.S., as elsewhere in the world, was the global rise in prices for oil and oil products, ordinary citizens in every country consider their government and their leader responsible for it, and America is no exception.

According to American experts, the objectively poor state of the economy isn’t the biggest concern; Americans’ negative expectations are a much bigger problem. At any rate, these expectations are turning into a powerful political factor.

In the spring and early summer, there were high hopes in America for the end of the COVID-19 pandemic. Vaccines entered the market, and it seemed that any day now, COVID-19 would be finally overcome.

This opinion was shared by officials as well, allowing the vaccinated to get rid of their masks and return to normal life. However, this recommendation proved to be premature.

First, not everyone got vaccinated. Second, people became convinced that vaccines do protect against severe illness, but they do not provide absolute protection.

Moreover, there was growing evidence that vaccines do not last forever. The country was immersed in a debate about the appropriateness or necessity of booster shots.

Biden and his team are hardly responsible for all of these problems. On the contrary, the administration has created a favorable environment for mass vaccination. But people’s sentiments, which have changed from euphoria to a more familiar concern, affected the way people size up the overall situation in the country.

To this must be added the frantic politicization of everything related to COVID-19. Do we need masks? Is it legal to insist on compulsory vaccination; doesn’t it restrict the rights of citizens? Local officials and governors, who are very powerful in the U.S. federal system, added gas to the fire. That’s why the White House finds it challenging, so to speak, to cope with Florida Gov. Ron DeSantis or Texas Gov. Greg Abbott and other local officials, who have very different positions on these issues.

Alarm bells rang for Democrats during the recent local elections. The most striking episodes were the elections for the governors of Virginia and New Jersey.

Virginia is a state bordering the U.S. capital. Biden’s associate Terry McAuliffe, an old hand and a former governor, had been considered the front-runner. Virginia has been voting mostly for Democrats lately; Biden won there quite easily last year.

But the election showed that support for the Democrats had been shaken. The winner was Republican Glenn Youngkin. As for New Jersey, Democrat Phil Murphy was reelected, but by a surprisingly small margin.

The country is frantically polarized.

Although the election of “centrist” Biden as president theoretically opened the door to some kind of reconciliation, U.S. society has failed to walk through that door. A year on from the election, the polarization is still there. Republicans are still hostile to the president. In the already-mentioned poll, 80% of them have a “very negative” opinion of Biden’s performance.

Among Democrats, approval ratings have dropped from 94% in the summer to 80% today. And the answer to pollsters’ questions about who is very pleased with Biden’s performance is even clearer. Among Democrats, the number of respondents who answered this question positively has dropped from 54% to 44%.

Consequently, there is a noticeable lack of enthusiasm even among his supporters.

It is not a bolt from the blue.

The Democratic Party is far from being monolithic. While the Democrats were more or less united during the presidential election, controversies have come to light after the election. On the one hand, there are the leftists, the progressives, who are disappointed with Biden to some extent. On the other hand, there are the moderates, the centrists; Biden is one of them. Some are even further to the right than Biden.

Meanwhile, with the Democrats barely controlling both houses of Congress, intra-party battles are of enormous importance.

Let’s recall that Democrats have a slight advantage in the House and a 50-50 balance in the Senate, with a very shaky advantage due only to the vote of Vice President Kamala Harris.

If even one senator deviates from the party line, it deprives the party of that advantage.

Right now, there are at least two staunch “apostates.” These are Sen. Joe Manchin of West Virginia and Arizona’s Sen. Kyrsten Sinema. They blocked the administration’s main bills on infrastructure and social benefits (the “Build Back Better” bill).

In fact, it was only this Monday, Nov. 15, when Biden was finally able to sign the infrastructure bill. It will cost $1.2 trillion. Another bill, for $1.85 trillion, has yet to pass, with a delay in the House of Representatives.*

But Biden had hoped to get these two bills passed through Congress much earlier. Indeed, more than a year has passed since the election, almost 10 months since Inauguration Day. This is a huge delay, costing Biden and the Democrats a lot. It’s no coincidence that in the above-mentioned opinion poll, only 35% of respondents believe the current administration has accomplished much during its tenure in office.

Foreign policy takes a back seat under such conditions, to some extent.

Considerable achievements that the majority can easily comprehend might have helped Biden in this case, but there aren’t any. However, there is America’s chaotic withdrawal from Afghanistan as the major highlight of the administration’s foreign policy.

It is entirely possible that the rule of the pendulum of public opinion will apply and the president’s approval rating will soon improve after the new laws take effect. But now, the White House is facing a wave of negative attitudes.

A year before the important 2022 elections, when the House of Representatives, one-third of the Senate, and officials in many states will be elected, the political landscape for Biden and his party looks quite complicated.

The author, Volodymyr Dubovyk, is director of the Center for International Studies, and associate professor of international relations at the Odessa I. I. Mechnikov National University.

*Editor’s note: This bill passed the House of Representatives on Nov. 19. It is now before the Senate.