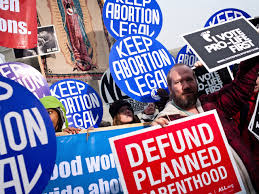 Republicans and Democrats have been clashing over this subject since the 1990s. Despite the majority of Americans (59%) who believe abortion should be legal “in most or all cases,” the subject is divisive.

For almost 30 years, Republicans and Democrats have torn each other apart when it comes to abortion rights. In the 1990s, the Republican Party veered sharply to the right, instigated by Republican Rep. Newt Gingrich of Georgia. The party’s ideological evolution continued through the administration of George W. Bush, a defender of the religious right, and later during Barack Obama’s presidency, with the tea party protest.

“The anti-abortion movement developed during the Clinton administration, when the evangelical vote was key for the Republican Party,” explained Denis Lacorne, a French political scientist who specializes in United States political history. “In 2000 and 2004, Bush obtained the votes of more than 70% of white evangelists. Donald Trump, according to him, received 81% of white evangelical votes in 2016.”

The question of whether or not Catholic politicians who support abortion rights should be refused communion came up for debate recently at United States Conference of Catholic Bishops. Their first target was President Joe Biden, a practicing Catholic, who was refused communion at a South Carolina church during his campaign.

Partly thanks to such divisiveness, the Republicans control 23 of the 50 states, which lets them adopt increasingly more restrictive laws on access to voluntary termination of pregnancy. The subject remains controversial for the Republican voter base in Southern and Midwestern states against a backdrop of extreme polarization between conservatives who are hostile to social and moral changes, attached to tradition, religion and patriarchy, and progressives focused on minority rights including racial, sexual and gender protections.

Conservatives have rebuked the 1973 Roe v. Wade U.S. Supreme Court decision, which recognized a right to privacy that conservatives argue does not exist in the Constitution. The Supreme Court with a majority of conservative justices could overturn this precedent, which would return the states’ right to prohibit access to abortion. “The judges know that eliminating a right that more than three-quarters of Americans hope to uphold, in one way or another, could damage their legitimacy,” Lacorne said. “They could thus preserve the right to abortion all while limiting its exercise in practice, by reducing the period in which abortion is legal.”

Worried about losing female and minority voters to the Democrats, the Republicans could, in the future, focus on other subjects. Republican governor-elect Glenn Youngkin of Virginia beat his rival Terry McAuliffe on Nov. 3 by focusing his campaign on education, a subject traditionally valued by the left. The Republican candidate notably denounced critical race theory, a pedagogical approach that teaches about institutionalized racism present in American history — a way to occupy more ideological ground.