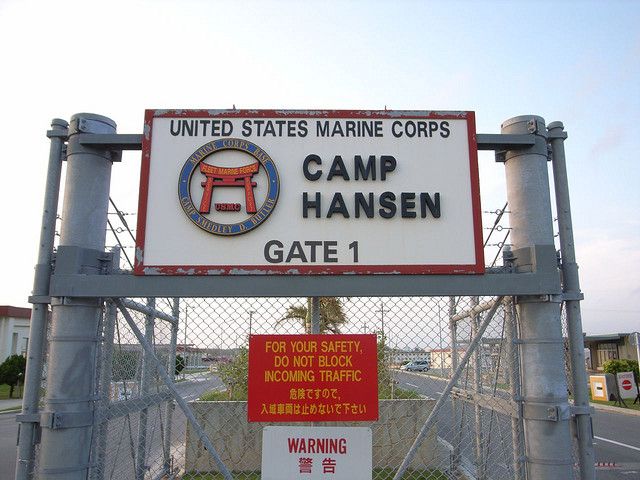 A large cluster of COVID-19 cases at United States Marine Corps base Camp Hansen has been reported, with 158 people said to have been infected as of Dec. 18. This is a particularly large number given the stability of the COVID-19 situation within Japan.

In addition, there have been a series of confirmed cases of the omicron variant in people connected to Camp Hansen.

A Japanese male employee was confirmed to have been infected on Dec. 17, while it was established that an American female employee and her Japanese husband had the virus on Dec. 18, bringing the total number of omicron cases to three.

What on earth is happening at this base?

The epidemiological connection between the U.S. Marines cluster and the male employees is not yet known. That said, the male employees have no history of overseas travel, whereas the Marines confirmed to have COVID-19 had only just arrived from the United States at the start of this month. As the prefectural government has indicated, it is highly likely that the employees caught the virus at the base.

U.S. forces in Japan should hastily announce how the virus spread and clarify whether the Marines in question have the omicron variant.

Both domestic and international reports indicate that the omicron variant is highly contagious and has a high reinfection risk. U.S. forces in Japan must conduct the necessary analysis and share this information with the prefectural government.

The U.S. Marine Corps based in Okinawa assert that they prioritize safety, that the activities of their personnel are restricted and there is absolutely no contact between people on the base and outside of it.

It is believed that this cluster of cases occurred after personnel who had arrived at Kadena Air Base were transported to Camp Hansen by U.S. military vehicles. Although there was a 14-day quarantine procedure in place, there are many details about the nature of these measures that remain unknown.

There are reports that personnel were able to move freely around the base after entering the country if they were fully vaccinated.

It was also revealed last month that a man associated with a U.S. Forces base who tested positive at the Narita Airport quarantine station was able to skip the quarantine period and board a commercial aircraft bound for Okinawa to return to a U.S. forces base.

The root of this problem is that when a person directly enters a U.S. forces base, Japanese authorities are unable to enforce any kind of quarantine due to the U.S.-Japan Status of Forces Agreement.

The Japanese government has strengthened its COVID-19 measures due to the rapid global spread of the omicron variant. In the Diet, Prime Minister Kishida Fumio stressed that “we should respond with the utmost caution to unknown risks.”

In contrast to this, Chief Cabinet Secretary Matsuno Hirokazu said in response to the recent cluster at the U.S. forces base, “Maintaining the readiness of U.S. Forces in Japan while preventing the spread of infection is an extremely important issue.”

What this statement fails to recognize is the increased risk for nearby citizens should infection spread within the base. The Japanese government needs to step up and proactively rectify this situation.