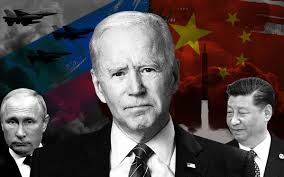 2021 was a year of enormous changes and uncertainties. The world has been brutally transformed and geopolitics is no exception.

Thirty years ago, at the end of December 1991, the Soviet Union fell, marking the end of the Soviet empire and the victory of the West. One year later, the American intellectual, Francis Fukuyama, published his infamous book “The End of History and the Last Man,” whose main thesis was that “it may constitute the end point of mankind’s ideological evolution and the final form of human government and as such constitute the end of history.”* Three decades later, history seems to be anything but finished. Two countries with visions about governing that differ from that of the United States are growing in global influence. Russia is looking to find its place in the concert of nations at the same time that China intends to reclaim the role of leading global power.

The United States — the main military, economic and geopolitical power since 1945 — now finds itself in a moment of deep internal division and doubt regarding the future of global hegemony. If one reads the U.S. press, it is clear they are warning about the risks and interests or ambitions of countries that intend to increase their global influence at the expense of the U.S., but mainly the press perceives that U.S. supremacy is guaranteed. But seen from Moscow, Beijing and most of the world, the U.S. position is quite fragile.

In 2021, two events strengthened the world view that the United States is a deteriorating power — the attack on the Capitol in January, and the fall of Kabul in August. These events seemed to indicate to U.S. adversaries that the balance of power iss changing on a global level.

In this context, in the middle of the last month of the year, we are witnessing two related offensives. On one hand, Russia is threatening Ukraine; on the other hand, China is doing the same with Taiwan.

Moscow has recently staged an international poker game, demonstrating its military power on the border with Ukraine. Last Thursday, after having raised the threat by announcing that an invasion of Ukraine could be imminent given the Western offensive, Vladimir Putin pointed out that things were improving, given that Washington was ready to start negotiations in Geneva in January. Putin said the negotiations must address Moscow’s demands, specifically, that the U.S. cease its military expansion into Ukrainian territory and that NATO must not expand, alluding to the admittance of Ukraine as a member. Even though U.S. military capabilities are superior to those of Moscow, the Kremlin’s strategy has made one thing clear: If Russia decides to invade Ukraine, the U.S. will impose very strong, unprecedented sanctions, but there will be no military response.

In another casus belli, China is increasing the number of military exercises in the Taiwan region and has even broadcast a video that simulates an invasion of the island.

It is a complicated end to the year for the United States both nationally, with the omicron variant strongly breathing new life into the COVID-19 pandemic, and internationally, with the double threat posed by China and Russia. Today the geopolitical future of the world remains unclear, but it is clear that what for some seemed to be the end of history was no more than an illusion. The world is living a never-ending story.