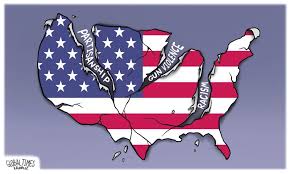 On Jan. 6, 2021, a crowd supporting former President Donald Trump launched an attack on the Capitol building in Washington, D.C., in hopes of overturning the presidential election results. At the attack’s one-year anniversary, the U.S. continues to investigate the causes of the attack and hold participants accountable in an effort to prevent it from happening again. However, warnings of a civil war are growing more urgent.

Barbara F. Walter, professor of political science at the University of California, San Diego, recently drew attention to the possibility of civil war in the U.S. Walter, in her book “How Civil Wars Start and How to Stop Them,” to be released next week, discusses how Trump’s fraudulent seizure of power and the attack on the Capitol was an event that led the U.S. through the “pre-insurgency” and “incipient conflict” phases to arrive at the “open insurgency” phase of civil war. As a member of the CIA Political Instability Task Force, Walter warned that if the index developed by the task force is applied, the U.S. will regress to being an anocracy, a state that exists between democracy and autocracy. Compared to generally democratic countries, partially democratic countries are three times more likely to experience civil war.

An article in The Washington Post last month by three retired generals, including former Army Gen. Paul Eaton, caused a ripple. The three generals, each of whom served in the U.S. Army for over 30 years, expressed their concern that 1 out of 10 participants in the attack on the Capitol were active-duty soldiers or had experience serving in the military, and noted that a more severe situation may arise following the 2024 presidential election. They wrote, “We are chilled to our bones at the thought of a coup succeeding next time.”

“If you were an analyst in a foreign country looking at events in America, you would go down a checklist, assessing each of the conditions that make civil war likely. And what you would find is that the United States … has entered very dangerous territory,” Walter notes in her book. Ordinary citizens have a similar sense of the situation.

The reality is that even after acknowledging a crisis, the U.S. does not have a clue about extinguishing the flames of political confrontation that are marked by hatred and revenge. Despite the fact that the House of Representatives established a special committee to investigate the Jan. 6 incident and hold participants accountable, the Republicans’ boycott of the proceedings makes it difficult to gain objective acceptance. Trump continues to make baseless claims that there was huge fraud last election, and 1 in 3 Americans believe President Joe Biden was not elected legitimately. The Republican Party is changing the system of elections by making it difficult for minorities and low-income voters to cast their votes, yet making it easier to reverse the results.

Will the U.S. be able to reform democracy and escape the threat of civil war? In an interview for Kyunghyang Shinmun in the new year, democracy theorist and Stanford Professor Larry Diamond stated he is optimistic that the U.S. will be able to overcome the democracy crisis, yet admitted, “We no longer can take anything for granted.” In the American Civil War 160 years ago, the U.S. lost 620,000 civilian lives. In present terms, that figure would come to 6 million.